Sunday’s Family Guy found Peter Griffin facing off against a fellow “fat idiot who once had a hit television show and who over time has worn out his welcome.” The episode chronicled Peter’s new life as President Trump’s latest press secretary, a gig he eventually quit when he walked in on his new boss sexually assaulting Meg, Jabba the Hutt-style.

This triggered the sequence we all knew was inevitable: a five-minute chicken fight between Peter and Donald “Cash Poor” Trump that nearly reduced our nation’s capital to a heap of rubble. The two managed to survive thanks to a last-minute intervention from Justin Trudeau, the hunky Prime Minister of Canada, but their working relationship was beyond repair.

Below, executive producers Rich Appel and Alec Sulkin discuss the episode’s origin, explaining how the show’s comedy — political or otherwise — has evolved over time: 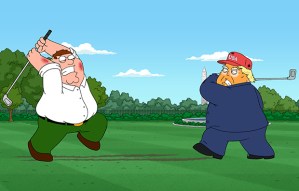 TVLINE | A lot of shows have lampooned Trump, both animated and live-action, but I don’t think I’ve ever seen one beat the s–t out of him like Family Guy did. Was there any concerns there?
APPEL |  None were articulated by any Powers That Be. It crossed my mind early on, but then I just remembered from law school that the First Amendment protects primarily any free speech against the United States and our elected officials, so we’re good.

TVLINE | This feels like the kind of thing Trump would comment on if he saw it. Are you hoping that happens?
APPEL | If it gives Family Guy 10 more years, yes.
SULKIN | If he says anything about Family Guy, it’ll be great. We’ll have to air it on Fox News, though. Then maybe he’ll see it.

TVLINE | When and how did this episode come about? I’m sure it was a while ago, but the jokes really didn’t feel dated.
APPEL | The story originally started as [last week’s first-parter], with Peter as a fake news purveyor. As we were breaking that story, we thought, “This is something Trump would like. Wait a minute!” So the second part was born out of that.
SULKIN | Trump has been very consistent, which helped us. He’s always in the news for doing the same things (i.e. lying), which helped this episode seem a little more current, even though it was written a while ago. 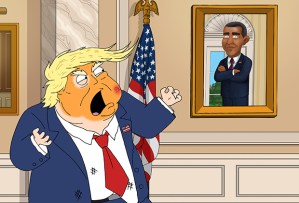 TVLINE | Where do you feel Family Guy falls on the political spectrum?
SULKIN | We’ve had some episodes in the past that had some left leanings in them, but we take hard shots all around. We’ve made fun of the Clintons and Barack Obama. It’s not like we would avoid anyone because we vote this way or that way. In any time that Family Guy has been on, we’ve pointed out idiots and the dumb things they do. This just happens to be our current person, and it would be no different if a Democrat were doing something idiotic, which they do.
APPEL | We’re not proselytizing for one political agenda; hypocrisy, lying and buffoonery in the public sphere should just be called out.
SULKIN | Look, Trump is funny. He’s funny to look at and to watch — if it wasn’t so scary. And you just try to milk the funny angle.
APPEL | He’s certainly a character. People with defined characteristics and qualities — good or bad — are easier to write about.
SULKIN | To any conservative who might say, “How dare they?” there’s a famous Reggie Jackson quote he gave to a reporter who asked what it’s like to get booed all the time. He said, “They don’t boo nobodies.” Whatever you think of Trump, he’s not a nobody. He’s our president, and we’re kind of booing him, but you don’t boo nobodies.

TVLINE | Peter also told Trump that Family Guy has been “trying to phase out” gay jokes. Are you really?
SULKIN | Kind of, yes. If you look at a show from 2005 or 2006 and put it side by side with a show from 2018 or 2019, they’re going to have a few differences. Some of the things we felt comfortable saying and joking about back then, we now understand is not acceptable.
APPEL | It’s almost unique to Family Guy, though I can think of one other show that’s been on the air longer. But if a show has literally been on the air for 20 years, the culture changes. And it’s not us reacting and thinking, “They won’t let us [say certain things].” No, we’ve changed too. The climate is different, the culture is different and our views are different. They’ve been shaped by the reality around us, so I think the show has to shift and evolve in a lot of different ways.

Your thoughts on the Peter/Trump showdown? Drop ’em in a comment below.