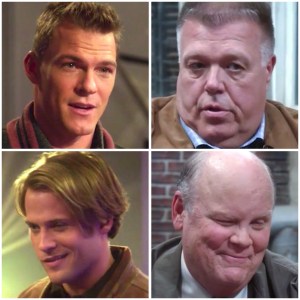 We begin with a flashback to 1986, as a young Scully and Hitchcock (played by Titans‘ Alan Ritchson and GLOW‘s Wyatt Nash) take down mafia boss Gio Costa with the help of Gio’s main squeeze Marissa. Thirty-three years later, Holt calls Jake and Charles into his office and tells them that Hitchcock and Scully were contacted by someone in Internal Affairs who has suddenly reopened the decades-old case — but why? Holt suspects that Commissioner Kelly is trying to drum up a scandal at the Nine-Nine as payback for second-guessing his new policing initiative. In the meantime, Holt wants Jake and Charles to brush up on the case without interfering in IA’s investigation.

In order to do this, Jake and Charles interview Hitchcock and Scully about the events of the case. Hitchcock tells Jake that they took down Costa, then intercepted a ton of coke and three duffel bags full of cash. There’s just one problem: A photo from the night of the sting shows Hitchcock and Scully with four duffel bags. The bumbling detectives suggest they missed the fourth bag — ‘ya know, on account of being dum dums — but Jake doesn’t buy it. That’s when the veteran cops first grow antsy; Scully paints himself the victim of a “witch hunt,” while Hitchcock accuses Jake and Charles of being “fake news.” (“That is definitely the language of the innocent,” Jake deadpans.)

To prove their innocence, Hitchcock and Scully turn over their combined financial records, which reveal that they’re not just poor, they’re destitute! The folder contains receipts for their favorite fast-food joint, Wing Slutz, as well as a monthly parking spot for The Beaver Trap, a sketchy old sex van that doubles as Hitchcock’s home between marriages. (“If the van’s a-rockin’, my ex-wife’s a-lockin’… me… out of her house,” he says.) Inside the van, Jake and Charles find the fourth duffel bag, but it’s empty. Before they can turn around and confront the potentially dirty cops, Hitchcock and Scully lock them in and flee the scene in Jake’s car.

Jake and Charles ultimately catch up to Hitchcock and Scully at Wing Slutz. There, the manager intervenes and reveals herself to be Marissa, then Hitchcock and Scully come clean. They tell Jake and Charles that Marissa was their criminal informant on the inside; they stole the money for her all those years ago after their captain refused to place her in witness protection. Before long, a call from Capt. Holt reveals that IA never reopened the case, and Hitchcock and Scully were most likely duped by none other than Gio Costa himself. Moments later, the mobster shows up at the restaurant, having tracked their location to get to Marissa.

Thankfully, Holt and the squad show up in the nick of time. Costa is apprehended, but manages to get his hands on an officer’s gun and fire two shots in Marissa’s direction. Hitchcock and Scully jump in front of her, each receiving what looks to be a fatal shot to the chest. Lucky for them, tubs of Wing Slutz’s signature slut sauce make perfectly adequate bulletproof vests, and the detectives walk away unharmed. Back at the precinct, Holt informs them that IA has placed them on probationary desk duty for a year. It’s punishment for stealing the money, but Brooklyn’s laziest officers couldn’t be happier.

A second flashback closes the episode, and reveals how Hitchcock and Scully lost their admirable physiques. They pay Marissa a visit at work, and she offers them free wings as a token of her appreciation. Suffice it to say, it’s love at first bite. 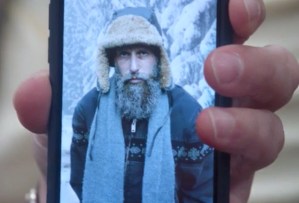 * Charles informs Jake that he’s on the verge of adopting Nikolaj’s half-brother Dragomir, who has reached out to him via email. He claims to be a 15-year-old on the precipice of puberty, but a profile photo reveals what looks to be a 42-year-old fur trapper. Charles eventually gets in touch with Nikolaj’s orphanage and confirms the existence of a 34-year-old half-brother. Apparently he’ll be visiting soon.

* As tensions escalate among the upstairs people (Terry, Rosa, et al.) and the downstairs people (Amy and her uniformed officers), Holt prepares for a television interview where he intends to speak out against Kelly’s regressive policing policies. Gina gets him ready with Gina Jargon — a world-renowned linguistic system that supposedly worked well for Ellen Musk, Season 1 winner of VH1’s Queen Bitch — but Holt misses his interview to get down to Wing Slutz. Gina fills in for him and manages to break a record for most viewer complaints.

* Meanwhile, Capt. Holt apologizes to the squad for his shortsightedness, and for allowing his pursuit of justice to affect morale at the Nine-Nine.

What did you think of Brooklyn Nine-Nine Season 6, Episode 2? Hit the comments with your reactions!