Need to catch up? Check out the previous A Million Little Things recap.

On your mark, get set, GO… ahead and wonder about whether you can ever really know a person and/or whether loving someone makes any sense, given the fragility of life! Make sure to grab some Gatorade and a bagel at the end!

This week’s A Million Little Things uses a community 5k for suicide prevention as a backdrop for the gang’s ongoing search for meaning in Jon’s death. There are some heavy-handed bits (so many references to getting people “over the finish line,” both metaphorically and literally!), but we also get more concrete answers to what the heck Ashley has been up to every time she’s acting squirrelly. And that, alone, is worth a victory lap.

Read on for the highlights of “Secrets and Lies.”

FAKEOUT! | The hour opens with a video that Jon shot of himself, and it looks like he might be in the apartment he showed Ashley at the end of Episode 10. “Let me just start by saying, I’m sorry. I abandoned you. I know for a long time, I’ve owed you some answers. There’s probably nothing I can say that can make this make sense, except just, I’m sorry, Barbara,” he says. Wait, what?

LIFE AS AN ENDURANCE SPORT | While Delilah is out for a run with her kids, she thinks about running to Katherine for help with the bank’s foreclosure on the house. Apparently Jon leveraged his family’s home against a larger commercial loan, and Delilah signed off on it — though she says she often signed papers Jon told her to, and she had no idea what she was approving. Katherine reassures her she’ll figure it out. 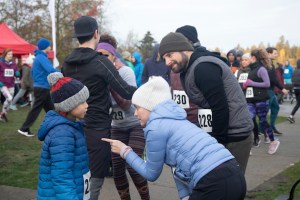 The gang is prepping to run a road race to benefit suicide-prevention efforts, but Gary thinks Maggie should sit it out, given that she’s got a chemo round the day before. But she’s determined to complete the run, explaining that among the chemotherapy’s side effects, lacing up her sneakers and pounding the pavement is the only thing that makes her still feel like her. At this point, she’s lost her hair and is wearing a wig; Gary gets a glimpse of her bald head when she doesn’t know he’s looking, and he’s visibly affected by the visual. Soon after, he changes his mind and becomes Running Maggie Superfan #1.

THE TRUTH ABOUT JON | Meanwhile, Katherine lets Delilah know that they’ve gotten a 60-day extension on the foreclosure, and that the commercial loan Jon took out “was for some properties he was underwater on,” Katherine says gently. The amount? $18 million (!), which Delilah now owes, because he used her personal assets to secure the loan. And the bank will take everything, she adds, including the life-insurance payout Delilah was relying on to reclaim her home.

Gary doesn’t believe that Jon would’ve left his family stranded like that. “He had a plan for everything!” he emphatically points out. But Delilah gets very angry very quickly as she notes that she’s been crushed by the weight of her guilt over the affair, thinking it had led Jon to end things, but it turned out he’d created his own mess. She then ejects Gary from the meeting at Katherine’s office.

Gary flashes back to the elevator breakdown that doubled as his first meeting with Rome, Jon and Eddie. Given that Jon is in full corporate d-bag swagger mode, I’m not sure why any of the others would’ve wanted to pursue a conversation with him, much less a lifelong bro-hood. When Gary starts to freak, Jon distracts him by asking who each of their dream dinner companion would be. Eddie says his old music teacher. Rome says filmmaker Lawrence Kasdan. Gary says T. Rutledge, then off the guys’ quizzical looks, points to the certificate posted inside their car: “the guy who inspected this stupid elevator, or failed to,” he notes. Jon sadly says he’d only want to have dinner with his wife and kids, because he works so much, he usually doesn’t get home in time.

WHAT IS ASHLEY UP TO? | Later, Delilah and Katherine are at a bank, trying to get more information on Winthrop Holdings, the shell company that Jon set up. While they wait for copies of documents, Ashley is at the front desk, closing out “the Rutledge account” and taking the money in the form of a cashier’s check made out to her. (Side note: I froze the frame and tried to see how much she was pocketing, but couldn’t see it precisely. It looked like multiple hundreds of thousands of dollars.) As Katherine and Delilah depart, Ashley sees them, but they don’t see her.

By the time the two women return to Delilah’s, it’s almost like they’ve forgotten that one was sleeping with the other one’s husband. But that illusion is shattered when Eddie, who has come home on an off night during the tour to surprise Theo, pops up and demands to know what’s going on with all of the Jon revelations, which he’s heard secondhand from the kids.

Speaking of the kids: Now that Sophie knows what her father was up to, she’s no longer interested in running the race.

DESPERATE TIMES | Faced with the news that Gina’s restaurant may never open, thanks to the financial woes attached to the property, a newly off-his-meds Rome offers to go back to making commercials. But rather than have her husband re-engage with the career that crushed his soul, she asks her mother to be an investor in the eatery. This is a terrible idea, but sure!

RACE ON! | The next morning, Gary picks up Maggie, who forces him to face the fact that Jon was human and therefore flawed. The perks of having a therapist for a girlfriend! They go to Delilah’s, where Danny comes out to his mom and sister, telling them that he hadn’t said anything earlier because he didn’t want to disappoint them. “Maybe that’s why Dad kept things from us, too, because he was just trying to be the person we thought he was,” the boy says. Everyone hugs, and eventually, a less-angry Sophie agrees to run the race.

Everything starts off fine. But then Maggie, who took off quickly and left Gary in the dust, starts to falter and has to sit down on the side of the course. She cries. Once everyone else has finished, Gary realizes that his lady is nowhere to be seen. He panics and runs back along the course, finding her exactly where she stopped. She sobs that she’s angry about how her body is betraying her. “You are strong. You are powerful. You are brilliant. You are also human,” he tells her, taking her by the arm and walking the remainder of the route with her. With everyone’s help, Maggie crosses the finish line after dark.

NOT-SO-PLEASED TO MEET YOU? | Katherine calls Delilah with the news that Ashley has been making payments on Jon’s loan since he died, under the name Rutledge Trust. Gary recognizes the name from the elevator; it became a kind of shorthand for “take care of my family” among the guys. He tells Delilah he can take her to Ashley’s apartment to get some answers, and the show’s camerawork and editing it seems like they arrive just as she’s shredding documents… including the envelope marked “Delilah” that Ash has been hiding since the pilot. But they’re at her actual apartment, and she’s shredded at the one where she kissed Jon.

Later, Ashley waits outside a building. A woman emerges, and we recognize her as the mystery woman from Jon’s funeral. “We need to talk,” Ashley says. “No, Ashley, we don’t,” the woman says, continuing to walk by her. “You owe this to him!” Ashley cries. Might I guess that we’ve just met Ms. Barbara Morgan?