The following post contains spoilers from The Resident‘s midseason premiere. (Need to catch up? Read our previous recap here.)

Ding dong, the witch is dead.

Although The Resident‘s fall finale had hinted at a possible demise for both Marshall Winthrop and Julian Booth, it was someone else entirely who left Monday’s winter premiere in a body bag: embattled oncologist Dr. Lane Hunter.

As for Marshall and Julian, only one of those cliffhangers was fully resolved in Monday’s episode, with the other taking an even more worrying turn. Read on for the details of “After the Fall”:

LIFE IN THE FAST LANE | With the help of Dr. Bell (whom she had recently blackmailed, of course), Lane makes bail and gets released from prison, prompting impassioned protests from angry former patients and their loved ones. One of these protesters is a woman named Natalie, who had to leave her career as a cop after Lane gave her chemo when she didn’t even have cancer; she now uses a cane to get around, and her bones have been weakened by the unnecessary cancer treatment. (And Natalie’s husband, Roger, has additional reasons to dislike Lane: She mistreated Roger’s sister, who only needed a lumpectomy for her breast cancer, but ultimately died from the extreme levels of chemo that Lane administered to her.)

After falling and injuring herself at the anti-Lane protest, Natalie arrives at Chastain Park Memorial, expecting to get a few stitches and be sent on her way. But while she’s there, Conrad & Co. discover that Natalie has a spinal cord compression that could soon paralyze her if it isn’t repaired with surgery. It takes some significant arm-twisting, but Natalie eventually agrees to the procedure on her back, and the operation has excellent results: Soon enough, she’ll be able to walk again, without the assistance of a cane.

But Natalie’s husband, Roger, is left further embittered by his wife’s experience at Chastain Park. Yes, Natalie survived the ordeal — but she was only put in such a life-threatening position because of Lane, and his poor sister didn’t live through Lane’s awful treatment. That’s why, later that night, Roger heads to the hotel where Lane is temporarily staying. He knocks on the door to Lane’s room, then raises a gun and shoots through the door multiple times just as Lane is peering through the peephole, killing her instantly.

Lane’s death, by the way, couldn’t have come at a more convenient time for Dr. Bell. Throughout the episode, Lane had continued to blackmail Bell in even more menacing ways, even after he provided her with the half-million dollars she needed to make bail. Lane then demanded that Bell testify on her behalf when her case went to trial — and if he didn’t agree to do so, Lane would reveal all of Bell’s dirty little secrets from the past year, including his arrest from a few months back, when he was caught soliciting a police officer.

Seeing no way out, Bell drafts a resignation email to Chastain Park’s board of directors at the end of the hour, cryptically explaining that some career-ending information about him will soon be revealed. But just as Bell is about to hit “Send” on the message, his assistant barges in and turns on the news, where Lane’s death is being reported — and after pausing to consider for a moment, a shocked Bell decides to delete the email without sending it. 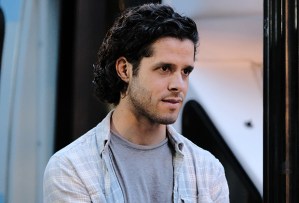 Elsewhere in the midseason premiere…

* Conrad’s father survives his emergency surgery (yay!) — but the prognosis for his Crohn’s disease isn’t great, and Marshall is painfully aware of that. In an emotional conversation with Conrad, Marshall reveals that he does not want his life prolonged “by aggressive measures,” in the event that another life-threatening situation presents itself. Conrad says he’ll respect his dad’s wishes, but I have a sneaking suspicion that it will be a tough call for Conrad to make when the time comes.

* After interviewing a handful of primary care doctors to potentially work at their outpatient clinic — all of whom are duds — Nic and Mina meet Dr. Alec Shaw (pictured at right), who is the ideal guy for the job. He hates institutionalized medicine, once worked on a Navajo reservation to do outreach and currently runs his own free clinic out of a converted bus. The only problem? He doesn’t want the gig. Nic, of course, won’t take no for an answer, and she eventually convinces Alec that he should join the team; in her opinion, Alec isn’t fighting hard enough against a health care system he claims to hate, and this outpatient clinic could be a bold step in the right direction. Alec ultimately decides to take the job — but in an upsetting turn of events for Conrad/Nic ‘shippers, Alec is a very charming dude who has immediate chemistry with Nic. (Noooo!)

* The question of whether Julian survived last fall’s car accident is, unfortunately, not answered in this episode. But QuoVadis does send a new medical device rep to Chastain Park, unceremoniously replacing Julian, and Devon gets suspicious. He sends her a lot of frantic text messages (to no avail, because Julian’s evil boss, Gordon Page, still has her phone), then shows up outside her place, looking to talk. But the only people inside Julian’s house are some of Gordon’s cronies, who are wiping all traces of Julian from the residence — and when Gordon realizes how suspicious Devon is becoming, he frames Devon by telling the authorities that Devon should be a person of interest in Julian’s disappearance.

OK, your turn. What did you think of The Resident‘s midseason premiere? Were you shocked to see Lane get murdered? Grade the episode in our poll below, then drop a comment with your thoughts!