The prognosis is very, very bad for not one but two major characters on The Resident.

Marshall’s potential death was triggered by side effects from his 20-year-long battle with Crohn’s disease. Though he remained stable in Chastain Park’s VIP wing for much of the episode (and finally had a heart-to-heart with Conrad in which they buried the hatchet), Marshall experienced a near-fatal bowel perforation in the final act of the hour and was rushed to emergency surgery. Though Dr. Bell tried to make quick work of the procedure, Marshall began bleeding out during the operation… and the episode ended before we could find out if he survived.

Julian, meanwhile, went all the way to the FDA to blow the whistle on QuoVadis’ wide-ranging fraud scheme. But her boss, Gordon Page, found out about her plans to betray the company — and the episode concluded with Julian’s car getting run off the road by a black SUV, sending her vehicle through a guard rail and into the water below.

Oh, and Devon broke off his engagement to Priya just moments before their wedding was to begin, revealing at last the feelings he’s been harboring for Julian.

For insight on the fall finale’s many plot twists, TVLine spoke with executive producer Todd Harthan. Read on for his teasers of The Resident‘s return in 2019:

DADDY ISSUES | When the Fox drama resumes next year, it will pick up “very soon after” the events of the fall finale, and viewers will get a quick answer about Marshall’s survival. Though Harthan can’t share if Conrad’s father makes it through his surgery, he can reveal that the midseason premiere will be “a powerful episode for Conrad,” regardless of the outcome.

“There was a lot to mine there, and there’s still a lot to get out of their complicated relationship,” Harthan teases. “[Episode 10 shows] the true, raw emotion of a son who is about to potentially lose his father. Matt [Czuchry] really nailed the bigger, emotional moments.”

Of course, we haven’t forgotten that Harthan previously teased a major death in The Resident‘s second season — and when asked whether Marshall or Julian might be the victim in question, Harthan would only say that “the person we were leaning toward [killing off] has changed” as the writers got deeper into Season 2 scripts. 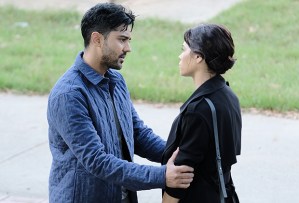 STICK TO THE STATUS QUO | As for Julian’s more literal cliffhanger, Harthan says the QuoVadis fraud storyline “does not carry all the way through Episode 22,” but is instead brought to an “exciting and compelling conclusion in the middle of our back half.”

And it isn’t just Jenna Dewan’s character who will be affected by QuoVadis’ corruption — though she’s currently the only one clinging to life in a submerged car. The fraud also will affect Dr. Bell, especially as he attempts to disentangle himself from Lane Hunter’s blackmail.

“[Dr. Bell] dodged a bullet [in Season 1], and the big question we’re asking this year is, ‘Will he be able to dodge it again?’ This is potentially even bigger, more explosive and crippling for the hospital if it goes wrong,” Harthan hints, adding that the midseason premiere will bring things “to a head” for Dr. Bell.

“The seeds of QuoVadis really start to yield some pretty poisonous information and results for him,” the EP shares. “It gets very, very complicated. I think you’ll be very surprised by what he does and how gets out of it.”

And Devon, who broke up with Priya in order to examine his feelings for Julian, will be on a “very introspective journey” in the drama’s upcoming episodes, particularly after he learns of Julian’s car wreck.

With that, I hand it over to you. What did you think of The Resident‘s fall finale? Grade it in our poll below, then drop a comment with your reviews of the episode!