As a ravenous reader of The Passage novels, Mark-Paul Gosselaar wanted Fox’s adaptation to very closely mirror author Justin Cronin’s trilogy. But as the star of the TV series based on the books?

Well, Gosselaar still wanted everything to happen just like it does on the page.

“I’m like, ‘We need to stay true to the books!,'” Gosselaar tells TVLine in advance of tonight’s series’ premiere (9/8c). “‘We need to follow the books in a linear fashion.’ And it just doesn’t work.” He laughs. “I mean, I guess that’s why I’m not a producer of the show.” 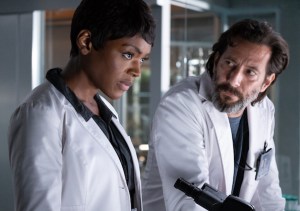 For the uninitiated: Fox’s Passage follows Brad Wolgast (Gosselaar), a federal agent who works for a secret government medical facility called Project Noah. Project Noah scientists have discovered a virus that might be the cure for all illness… if only they can figure out how to deactivate the virus’ worst attribute: It turns the infected into bloodsucking, clairvoyant, killing machines that the show calls vampires “virals.”

Wolgast has few qualms about his job until the day he’s charged with bringing in a young orphan named Amy (played by Saniyya Sidney, Fences). Pretty soon, Brad’s attempts to protect Amy cause him go rogue, just as Project Noah is poised to maaaaaybe bring about an apocalypse. (Oops.) 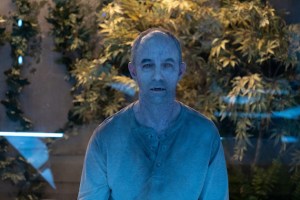 And if you do happen to be someone who’s read all three massive Passage volumes, prepare to be rewarded — even in Season 1. “We bring things in the first season that people who have read all three will notice,” Gosselaar teases.