This week on The Good Doctor, Morgan aids an infected Lim, while Shaun performs his first solo operation, mid-quarantine.

Down in the emergency room, we learn that the deadly virus, which has already claimed three lives, is not in fact airborne. Morgan discovers that EMT Tyler had a hole in his mask, which allowed blood and saliva particles to travel and infect him during transport of those sickly airline passengers. Lim, who was the fourth person to contract the virus, was last seen passed out. She pulls through after Morgan places her on extracorporeal life support. Afterwards, Melendez pays Lim a visit in recovery, and it’s clear that there are some real feelings there. “The idea of you not being around wasn’t OK with me,” he tells her. (After all, with whom would he share an after-work bourbon?)

No one else contracts the virus in Monday’s winter premiere, but another life is lost. Bob, the absentee father who agreed to donate bone marrow to his son Chris, dies after Park completes the extraction; his IV breaks off and travels to his heart, and the doctor is unable to reverse the damage. On the bright side, Chris’ transplant is a success, and Melendez and Claire’s patient lives to see another day. 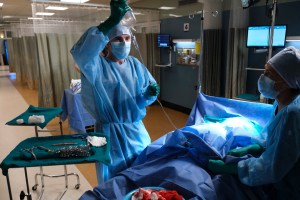 Meanwhile, an overwhelmed Shaun manages to conquer his crippling anxiety and help Morgan complete her combat-style operation on Pete. (As for the source of Shaun’s anxiety, Park goes ahead and shatters the overhead light responsible for that incessant buzzing sound.) Afterwards, Shaun tends to pregnant patient Viola, who suffers from preeclampsia. Even scarier, her placenta erupts during a procedure to turn the fetus. Shaun is then forced to perform an emergency C-section on his own, as the hospital’s chief obstetrician guides him through it from outside the quarantine zone.

Viola’s baby is delivered, but has a buildup of fluid and fecal matter in its lungs. Meanwhile, Mom is bleeding out. With no other doctors around, Shaun instructs Kellan to perform CPR on the newborn while he tends to Viola. Both mother and child are last seen in stable condition.

Afterwards, Kellan and Park have a heart-to-heart, during which Park admits that he let his family go because he felt like a failure. His own father had a mantra — “Be like a stone, never cry” — which he took to heart; when he couldn’t live up to that mantra, he skipped town. “My father’s voice is still in my head, but I’m working on getting it to be quiet,” Park says. And should he get there, there might be a chance at reconciliation with ex-wife Mia (played by Will Yun Lee’s better-half Jennifer Birmingham Lee) — or at least that’s the vibe that this recapper got. Why else have her appear out of the blue at the end of the episode? 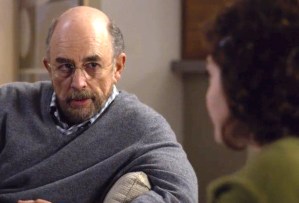 On the “good news” front, Glassman finds out this week that his cancer has not returned, as previously suspected. His CT scan instead confirms that he contracted meningitis from a CSF leak in his head, which caused his memory loss. He’ll need corrective surgery, but is no longer in danger of permanent cognitive impairment. The former hospital head will be able to retain his driver’s license upon recovery.

Before the meningitis diagnosis rules out another cancer scare, Glassman tells Lea that he plans to hide his condition from Shaun, who nearly killed a patient the last time he found out that his mentor was sick. Lea speaks up on Shaun’s behalf and tells Glassman that he needs to treat Shaun like an adult. In response, Glassman, who doesn’t take kindly to Lea’s advice, accuses her of constantly toying with Shaun’s emotions. He apologizes after he returns with a much less grim prognosis, then takes her advice and tells Shaun about the corrective procedure he’ll need to remedy the CSF leak. As the hour draws to a close, Lea implores Glassy to give Shaun a hug, during which he tells Shaun how proud he is of him for delivering that baby. All three of them then head out for a well-deserved pancake breakfast.

What did you think of The Good Doctor Season 2, Episode 11? Hit the comments with your reactions!