The Good Doctor closed out its first season on Monday with good news for Richard Schiff’s ailing alter ego, who was initially diagnosed with a terminal form of brain cancer. A subsequent biopsy showed that he actually has a low-grade glioma, which can be treated via a combination of surgery, radiation and chemotherapy. In other words, the guy’s probably gonna make it.

Of course, the lead-up to his relatively rosy prognosis proved difficult for Shaun, who in addition to struggling with Glassman’s potentially grim outcome, had lost the toy scalpel given to him by his dead brother Steve. (Not to worry, it was in his backpack the entire time.) Distracted during surgery, he accidentally nicked a patient’s aortic wall, causing a pseudo-aneurysm that nearly killed him.

The patient survived, but Shaun wasn’t comfortable keeping his mistake a secret from Andrews. As the hour drew to a close, Shaun and Glassman went to speak with the chief of surgery, knowing full-well that Glassman would be forced to resign as hospital president, and Shaun could face possible termination.

Below, showrunner David Shore weighs in on Glassman’s fate, Shaun’s surgical mishap, and Andrews’ inevitable promotion in the already-ordered Season 2…

TVLINE | Did you have this cancer storyline mapped out when Shaun and Glassman had their initial falling out in the fall finale?
It was always the intention to [get] to this type of ending in Season 1. 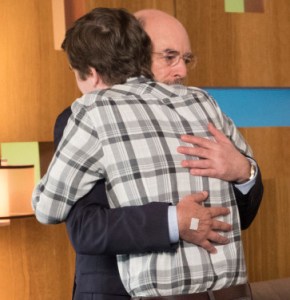 TVLINE | We were initially led to believe his condition would be fatal. Did you ever consider going that route?
Yeah, there was some debate about that. I didn’t spend a lot of time [thinking about it], because even if this cancer is ultimately going to kill him, I didn’t want to just go, “OK! You’ve got cancer! You’re dead!” I want to explore that [cancer]… and I don’t just want to explore that in one episode. I want to take my time and let it manifest itself, to study the permutations of that and the reality of it, and just go deeper with it.

TVLINE | Will the start of next season focus on Glassman’s transition from hospital president to patient?
That’ll certainly be a big part of it, yes. 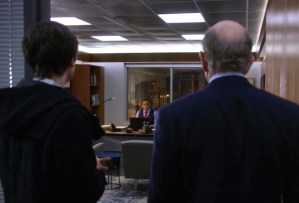 TVLINE | Which brings us to that cliffhanger, as Shaun and Glassman walked into Andrews’ office to confront him about Shaun’s surgical error. Was this always how you envisioned the season would end?
Not all the details were set, but I sort of knew as soon as the pilot was written that the natural bookend to that beginning was this ending. It’s important to me that Shaun not just be a superhero with autism, but be a real person with strengths and weaknesses. He makes heroic moves, but is also capable of mistakes, both minor and major, as we all are. Dr. Glassman makes a promise in the pilot that if Shaun doesn’t live up to all that he is promising he is capable of, that Drs. Glassman and Murphy will be gone. You know, if you show a gun in Act 1, it has to be fired in Act 4. That [promise], to me, was the equivalent of a gun, and I wanted to see Shaun make a mistake.

TVLINE | But Shaun isn’t actually getting fired… right?
We can expect to see Shaun still working at San Jose St. Bonaventure… I think the focus [of Season 2] is going to be that there’s a new hierarchy — a new sheriff in town.

TVLINE | And that sheriff, of course, is Andrews. Was there any concern about making him the antagonist again, having shifted away from that since the pilot?
I look forward to seeing what he does that drives us crazy, and drives the team crazy… I think he’s going to be a president we instinctively don’t like, [but] I think we’re going to be surprised by him.

TVLINE | Last but not least, what’s the likelihood of Jared taking that residency in Denver? The only one who seemed sure he had one foot out the door was Reznick, and she has her reasons for wanting him gone.
[Laughs] We don’t have it all worked out yet, but that’s a reasonable question for the audience to have.

Grade The Good Doctor‘s Season 1 closer via the following poll, then hit the comments to discuss all that transpired.