The Good Doctor did not leave things in a good place with Monday’s midseason closer, which found Shaun and Dr. Glassman at a breaking point and one of the residents fired after assaulting his superior.

Let’s begin with Shaun. At the start of “Sacrifice,” he is paged by Dr. Glassman to come to his office. There he is confronted by a psychologist who Glassman has hired on his behalf to begin at-home therapy sessions. Shaun is vocal about his discomfort, but ultimately agrees to sit down with her. That’s until he meets our patient of the week, e-sports champ Bobby Otto (The Good Place‘s Manny Jacinto), who convinces him that he needs to stop letting people tell him what to do if he ever wants to be respected.

As for Bobby, he initially comes in for a minor surgery to repair torn ligaments in his left arm. After Shaun takes a stand against Melendez and recommends that Bobby get an MRI, they discover a malignant cancer, which is later found to have metastasized and spread to his brain. As it turns out, Bobby had already had cancer three years prior, but failed to disclose this during his consultation. Despite the risk it poses to his career, he agrees to let Glassman and Melendez proceed with a surgery to remove the current cancer, as well as part of his brain stem, that will result in partial paralysis. There’s an initial scare in the OR, but Bobby ultimately pulls through. 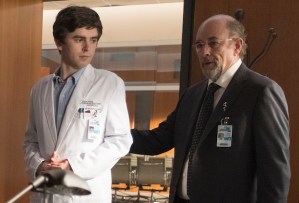 Shaun, who spends much of the hour avoiding going home so he doesn’t have to meet with the therapist, eventually confronts Glassman in the lobby of the hospital. He freaks out, calling Glassman stubborn and telling him that he’s not his father. He stresses that he wants to make his own decisions, then starts hitting himself on the head while mumbling incoherently. When Glassman approaches Shaun and tries to get a hold of him, Shaun turns around and hits him in the face before running off.

Later, when Glassman and the psychologist head over to Shaun’s apartment to see if he’s OK, they find that he’s packed up all of his belongings and left without notice. Not even Glassman knows where he might have gone.

Claire this week has a mighty problem of her own when she begins working with Dr. Matt Coyle (Rosewood‘s Eric Winter). Clearly thinking he’s above the recent wave of sexual harassment scandals, he first oversteps his bounds by touching Claire’s lower back while she’s with a patient. She tells Kalu about the incident and asks if he’ll trade patients so she no longer has to work with Coyle, but Kalu downplays the whole thing, saying Coyle must have been trying to establish a rapport. (Ugh!)

Later, Coyle makes another unwanted advance. He asks Claire out, promising a “great massage” and a “killer omelette in the morning.” When Claire tells him that he’s making her uncomfortable, he responds by pointing out that she’s already sleeping with Kalu. He then says, “Take the stick out of your ass the next time you’re being asked out,” before exiting the room. 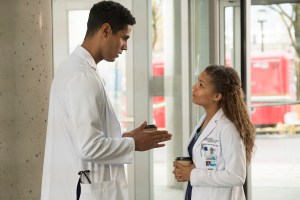 Afterwards, Claire tells Kalu about what went down with Coyle. She also berates him for not taking her earlier warning about the attending surgeon more seriously. This prompts Kalu to confront Coyle on his own. He throws the doctor up against a wall, and tells him that if he ever so much as looks at Claire the wrong way again, there’ll be hell to pay.

Claire later goes to speak with Andrews, who we’re led to assume filled her in on Kalu’s actions. When she then goes to yell at Kalu for trying to fight her battles, he tells her that he’s been fired for assaulting Coyle.

Elsewhere in the episode, Melendez reluctantly agrees to go to dinner with Jessica and her father, who turns out to be a real piece of work. He agrees to pay for their wedding, assuming Jessica’s going to quit her job to start a family. Melendez doesn’t take well to his future in-law’s sexist remarks, calling the man a parasite. The next day, he apologizes to Jessica for lashing out, which is when she drops a major bombshell on her fiancé: she never wants to have kids. Judging by the look on his face, this is the first time she’s made this known — and he’s not happy about it.

Now we turn it over to you! Grade The Good Doctor fall finale via the following poll, then head to the comments and answer the following: Where could Shaun have possibly wandered off? Is Kalu’s surgical career really over? And is Melendez’s relationship with Jessica doomed?