The second week of America’s Got Talent: The Champions brought back 10 more fan-favorite acts from seasons past, sending one lucky pair straight through to the finals.

So, who’s joining Susan Boyle and Preacher Lawson in the Champions finale? And which act got the second Golden Buzzer, this time in the possession of judge Heidi Klum? Let’s break down Monday’s episode, act by act: 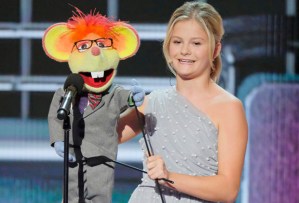 1. DARCI LYNNE FARMER | Joined by her puppet Oscar, the winner of AGT Season 12 kicked things off with a killer medley of Tina Turner’s “Nutbush City Limits” and “Proud Mary.” Simon Cowell was “literally blown away” by Farmer’s performance, which showcased how much the ventriloquist’s vocal strength and stage presence have developed since she first competed in 2017.

2. ASHLEIGH AND SULLY | Following a heartbreaking introduction — during which Ashleigh Butler recounted the death of Pudsey, the dog with whom she won Season 6 of Britain’s Got Talent — Butler emerged alongside her new(er) pooch Sully for a ringside routine that can only be described as Flashdance meets GLOW. (I may never get “She’s a Maniac” out of my head.)

3. LIGHT BALANCE | I’ve never dropped acid while playing with a Lite Brite, but I imagine it would feel a lot like this week’s performance from Light Balance. The electronic dance troupe put on an electrifying display set to jams like Kiss’ “I Was Made for Lovin’ You” and Backstreet Boys’ “Everybody.” Cowell even told the group, “If you had done that two years ago, this could have ended differently.”

4. TAYLOR WILLIAMSON | Heidi Klum’s boyfriend — in his mind, anyway — showed up determined to win it all, following his second-place finish in Season 8. (His secret weapon? “Different jokes!”) It was fine, I guess, but after watching a crowd go wild for Preacher Lawson last week, I’m wondering why they bothered putting any other stand-up comedians in this competition.

5. CRISTINA RAMOS | Equal parts operatic diva and rock goddess, the winner of Got Talent España served up an explosive rendition of Queen’s “Bohemian Rhapsody.” I’m struggling to find the appropriate adjective, so I’ll just echo Heidi Klum and call the performance “bonkers.” (Speaking of Klum, it really looked like she was considering giving Ramos the Golden Buzzer. I would have.)

6. DDF CREW | Set to the tune of The Black Eyed Peas’ “Pump It,” this jump roping dance crew — which won Season 5 of Holland’s Got Talent and was a semi-finalist in Season 4 of Belgium’s Got Talent — put in a good effort, but as Howie Mandel put it, “we’ve seen a lot better.”

7. VIKTOR KEE | It takes a lot to get me excited for a juggling act, but this Season 11 finalist definitely got the job done with an elegant, stunning performance. (The music! The lights! I loved it all.) Sure, I agree with Cowell that we’ve seen “better” acts, but if this was called Jugglers’ Got Talent, I’d send Kee straight through to the finals.

8. COURTNEY HADWIN | This (allegedly) shy finalist from Season 13 returned with a vengeance, forgoing a classic cover for an original song. Could I always tell what she was singing? No. But did the 14-year-old crush the performance with a confidence and presence well beyond her years? Yes, sir.

9. DEADLY GAMES | Do you wake up every morning thinking, “What if I kill my wife?” Alfredo Silva — one half of this danger act, which we met in Season 11 of America’s Got Talent — sure does, as he explained prior to taking the stage with wife Anna. (The intro also showed footage of the performance going wrong during rehearsals, as if we needed to be any more worried about this man hurling knives at the mother of his child.) Fortunately, everyone survived. Even better, Deadly Games got Klum’s Golden Buzzer!

10. PIFF THE MAGIC DRAGON | Always a pleasure, Season 10 finalist Piff the Magic Dragon — easily my favorite British magician-comedian — wrapped up The Champions‘ second installment with a routine that ended with Klum squeezing an egg out of a dog, then sifting through the egg’s yolk to retrieve her missing ring.

In the end, though, only one act could follow Deadly Games on its journey to the finals. Once the “superfan votes” were tallied, Courtney Hadwin finished in third place and Darci Lynne Farmer came in second, with Cristina Ramos earning the top spot.

Your thoughts on this week’s results? Any others acts you wish had made it through? Weigh in via our poll below, then drop a comment.