Monday’s premiere of America’s Got Talent: The Champions was an even crazier blast from the past than we expected. We knew we’d be seeing a few familiar faces — including cat lady-turned-singing sensation Susan Boyle, who has somehow become even more humble and inspirational in the years since her big break — but we weren’t prepared to revisit the judges and hosts of yesteryear. Brandy Norwood? Reba McEntire? Regis Philbin?! (Heck, even he admitted to forgetting he was ever part of the AGT family.)

And what a night it was. Ten international acts, including a few AGT winners, hit the stage to vie for the title of “Champions.” But only two acts, including the one lucky enough to receive Mel B’s Golden Buzzer, would be proceeding to the finals, so let’s see how everything shook out. 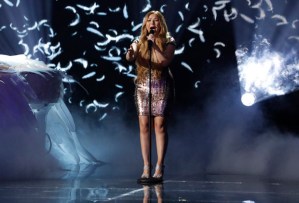 1. BIANCA RYAN | After winning the first season of America’s Got Talent at the ripe old age of 11, Ryan suffered from vocal paralysis, making her appearance a true comeback. “I’ve lived 12 years in the shadows, and I’m ready to see the light again,” she said before launching into a powerful, emotional rendition of A Great Big World’s “Say Something.” I second Mel B’s praise that Ryan’s performance “did more than just take us on a journey,” and I think the sheepish grin on Simon Cowell’s face said it all.

2. THE CLAIRVOYANTS | It’s a good thing this is America’s Got Talent, not the Salem Witch Trials, or else this mentalist duo would have been burned at the stake after what they did on that stage. Not only did Amelie correctly predict how each judge would plan their perfect dream date, but Thommy followed that up by showing footage of her making the prediction before the show even started. Witchcraft!

3. SARA AND HERO | This Season 12 dog act returned, charming as ever, with a heist-themed routine set to Hall & Oates’ “You Make My Dreams Come True.” And if your heart didn’t break at least a little bit when she said, “He’s getting older, and this could possibly be one of his last performances,” you’re a damn monster.

4. UZEYER NOVRUZOV | What do you do when a ladder-related accident nearly paralyzes you? If you’re a normal person, you stay as far away from ladders as you possibly can. But if you’re Novruzov, who famously hit the stage hard, you return to AGT for a potential second beating. With his ladders of many sizes, not to mention that “Charlie Chaplin meets Evil Knievel” swag, he was able to wow the judges once again.

5. VICKI BARBOLAK | Watching Barbolak do comedy feels like catching up with your aunt, only she does all the talking. And all the drinking. But I loved every minute of her set, which lampooned everything from the Kardashians to rescue dogs. 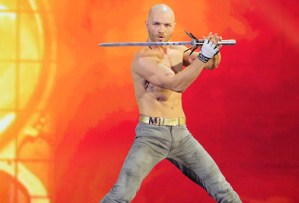 6. ALEX MAGALA | This marks Magala’s eighth season with the Talent franchise, and for good reason — the guy knows how to put on a show. In fact, the 29-year-old Moldovan sword swallower’s final “death drop” was so intense, a commercial break was required to do it justice.

7. JUSTICE CREW | After winning the fourth season of Australia’s Got Talent in 2010, this dance group branched out into music, scoring five top-10 singles in its home country. But did the singing take away from the moves? Mel B certainly thought so, telling the boys she was hoping for better acrobatics. That said, the judges agreed they worked well as a group, and Cowell commended them for “having the guts to come back and compete again.”

8. SUSAN BOYLE | Beyond witnessing Boyle’s joyous reunion with Cowell, it was a thrill to hear her belt out every note of The Rolling Stones’ “Wild Horses.” And she was adorable in her pre-taped segment, clearly still in awe of how far her career has taken her. Neither I nor Pebbles were the least bit surprised to see her earn the Golden Buzzer.

9. SOFIE DOSSI | I expected nothing less from this Season 11 contortionist/aerialist than that gravity-defying performance set to “Que Sera, Sera.” 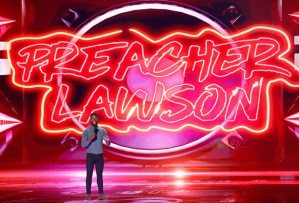 10. PREACHER LAWSON | AGT really saved the best for last, didn’t they? Lawson may not have swallowed a sword or helped a dog rob a bank, but his stand-up act — about everything from dating white women to becoming a vegan — had everyone cracking up. (The tight pants and twerking certainly didn’t hurt.) Even Mel B admitted that, had she not already used her Golden Buzzer on Boyle, she would have used it on him.

With Boyle already going through to the finals, only one spot remained for the other nine acts in Monday’s premiere. Following the reveals of Dossi in third place and Ryan in second, Preacher Lawson was revealed to be the other act moving on.

Your thoughts on Boyle and Lawson’s major coups, as well as the other eight acts being sent home? Cast your vote in our poll below, then drop a comment with your reasoning.