Raza Shar is an easygoing young guy, born and raised in East London, who works at a shipping company and lives at home. Then one night he and some friends drop Molly at a club, things go sideways, and pretty soon Raza finds himself in police custody… where his Pakistani heritage suddenly makes him a very attractive, very conflicted asset in England’s counter-terrorism battle. 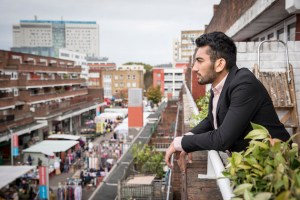 From there, Informer — all six episodes of which are available today on Amazon — weaves a complicated but compelling story of how Raza, his counter-terrorism agent handler Gabe and a slew of other characters are (or aren’t) involved in the violent attack on a café that opens the series. For scoop on the new drama, TVLine interviewed series creators Rory Haines and Sohrab Noshirvani via email. Read on for their answers, written together, as well as other important tidbits about the British thriller.

IF YOU LIKED… | … The Wire, you’ll probably enjoy Informer, which drives story via a large number of characters’ perspectives. “We wanted to show how these type of events, like the café attack, are created by a tapestry of characters and events rather than a singular plot drive,” Haines and Noshirvani wrote. “That being said, the show mainly follows the trajectory of Raza, Gabe and Holly, and one of the main rules of the show was never to cut to a random board room or secret lair. We could only meet characters that our principle characters had already met. That allowed us to keep the story focused much more from the ground up.” 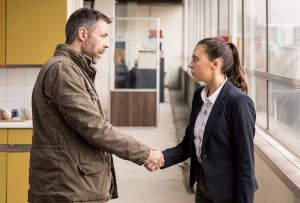 POLAR OPPOSITES | Yes, Gabe is an attractive, flawed guy. And yes, Holly is an attractive, flawed woman. And yes, they work together under extreme pressure in a high-stakes job. But don’t expect any Chicago P.D.-esque romantic hijinks between the pair. Noshirvani and Haines said they were very impressed by how seriously most police officers take their work, “so we wanted to reflect that in a central cop relationship that didn’t get distracted by romance or melodrama,” they wrote. “Gabe is someone whose life is very compartmentalized, and he likes to control the flow of truth. Holly, on the other hand, has an insatiable sense of curiosity.” Both of those traits make them effective police officers, they add, “but set the two of them on a collision course over the season.”

FAMILY MATTERS | Raza’s family — and his mom, Sadia (played by Sunetra Sarker, Broadchurch) in particular — are a giant reason why he eventually agrees to cooperate with CTSU. “In tackling the show, we knew we were dealing with such a big topic in counter-terrorism, but we never wanted it to feel issue-driven or like we were lecturing the audience,” wrote Haines and Noshirvani. “Building out Raza’s family was a really important part of investing the audience in his personal journey.” They also hinted that Raza’s familial relationships could become “collateral damage” of his work with Gabe as the season progresses.

SPOILER ALERT! | Informer already aired on the BBC, so if you don’t want to find out what happens, stay away from Google.