Need to catch up? Read our previous Blindspot recap here.

Blindspot‘s winter premiere offered us a first-class, all-expenses-paid trip to the inside of Jane Doe’s brain — and boy, was it trippy.

Though Remi has been at the wheel for much of the NBC drama’s fourth season, Kurt Weller and his FBI team set out to change that in Friday’s episode, with the help of a risky (but ultimately rewarding) procedure that reversed the effects of Jane’s ZIP poisoning.

I’m jumping a bit too far ahead, though. Last we saw Weller and Jane, they were lunging at each other in an abandoned warehouse; Weller wanted to bring Jane in for the ZIP procedure, and Jane, if we’re being frank, just wanted to beat the crap out of Weller. The winter premiere picks up right where that scene left off, and after a doozy of a fistfight, Weller ultimately sedates Jane with a syringe to the neck and brings her back to headquarters.

Once there, Jane’s brain gets hooked up to all sorts of intimidating machinery, and Weller gets the scoop on what, exactly, this procedure is supposed to do for Jane: Essentially, it aims to flip Jane’s brain back to the way it once was, with Jane’s memories taking the place of Remi’s memories. Dr. Nancy Williams, the specialist overseeing the procedure, will give Jane’s memories a manual push from the real world, but Jane will have to do the heavy lifting herself, from inside her own head. It’s very, very risky, though: Not only could the procedure fail, but if they wake Jane up for any reason while it’s happening, she’ll die. So… big bucks, no Whammies, please!

What follows is an intense, emotional and altogether weird visit into Jane’s cranium, and Jaimie Alexander does a lovely job navigating her character(s) through the journey. The inside of Jane’s brain — or this version of it, at least — looks like a combination of the FBI offices and a shady-looking medical facility that would definitely perform unsanctioned experiments on little kids if this were a comic-book movie. Shortly after waking up inside her own mind, Jane discovers that Remi is located somewhere else in her head, and she realizes that she must confront Remi and reclaim her own brain before it’s too late.

As Jane works her way through the ominous structure of her own thoughts, wandering through dark hallways and avoiding freaky sounds, she encounters all sorts of obstacles and puzzles. One of the roadblocks is Roman — a freaky, hunched-over, revenge-seeking version of him, that is. Though Jane is terrified of her brother at first, she ultimately embraces his appearance in her mind, and she gets him alone for a heart-to-heart conversation. Through tears, Jane apologizes to Roman for not protecting him better: from the orphanage, from Shepherd, from herself, from all of the above. She confesses that she misses him, and Roman eventually softens, forgiving her for the unfortunate life he led. 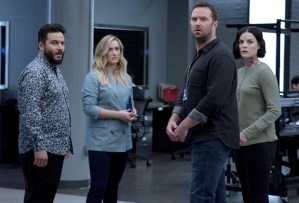 Later, Brain-Jane encounters Shepherd in a different area of her mind, and Shepherd attempts to break Jane by reminding her how much pain she has caused herself and others in her world — Weller, the FBI team, her brother, her daughter. But even as Shepherd taunts her, Jane remembers something Roman once told her: Pain is a dream. That phrase seems to set her free, and all of the unpleasant memories with which Shepherd was torturing her suddenly turn to happier ones, like Jane and Weller’s wedding. Shepherd disappears for the time being, but she warns Jane that “we’re not done — not by a long shot.”

As Jane’s journey through her own head continues, she starts to realize something: She remembers Remi’s life just as clearly as she remembers her own life. All of Remi’s memories, from her childhood with Roman all the way through recent weeks with Weller and the FBI, are in Jane’s head, too — and it occurs to her that she and Remi are one in the same. The confrontation with Remi shouldn’t be about defeating her; rather, she needs to embrace this part of her and accept that she and Remi are linked.

That’s why, when Jane finally reaches the place in her mind where Remi has been hiding, she tells Remi that they are not each other’s enemies. The real enemy here is Shepherd, who robbed Remi and Jane of their innocent childhoods, turned them into soldiers and took their choices away. It takes some convincing at first, but Remi comes to see Jane’s perspective on the situation, and Jane decides to forgive Remi for everything she did while in control of Jane’s brain. While they’re chatting, Shepherd appears at the opposite end of the room, aiming her gun at both halves of Jane’s psyche. Unafraid, Jane and Remi walk toward the woman, and they merge into one person as they get closer to Shepherd, who disintegrates into dust once Jane and Remi have fused.

Just then, Jane wakes up at FBI headquarters, a little unsteady but otherwise in tact — and she’s back to her normal self again. In fact, “for the first time in my life, I feel like a whole person,” Jane tells her team. There is one loose end to tie up, though: Shepherd, who has been waiting for Jane at that abandoned warehouse ever since leaving the CIA black site. Jane tells Weller where he can find Shepherd, but when he and the FBI arrive at the warehouse, she isn’t there anymore. Instead, Shepherd has made her way to Jane and Weller’s apartment, and she’s waiting there for Weller when he returns home. Their fight in the living room is short-lived, though: Jane ends it for good by shooting Shepherd multiple times, closing the book on the Sandstorm saga as Shepherd bleeds out and dies.

The next day, Jane returns to work at the FBI, and it seems as though things have returned to normal — that is, until Reade walks off the elevator with a handcuffed Zapata in tow.

OK, your turn! What did you think of Blindspot‘s midseason premiere? Were you surprised by Shepherd’s death? Grade the episode in our poll below, then drop a comment with your thoughts!