The Good Place gang has set foot in the actual Good Place for the first time… but they’re still a long way away from heaven, it turns out.

Thursday’s winter premiere picks up where we left off, with Michael, Janet and the four humans in the Good Place’s mailroom. Tahani thinks it looks a bit drab for heaven, but they’re convinced they’re in the right place when they all take a deep breath: The Good Place smells like whatever makes you happiest, you see. (To Tahani, it smells like “a curtain closing between first-class and economy.”) Michael warns if they’re caught, they could be sent straight to the Bad Place, and concocts a ridiculous story about the humans winning a contest to earn a Good Place tour. Luckily, Gwendoline the mailwoman (Nailed It!‘s Nicole Byer) is so cheery and trusting, she buys the lie without a second thought. 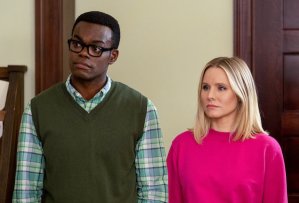 She shows them the door to the Good Place, but humans can’t use it; the only entrance for them is “500 trillion miles north-south-north of here,” she says with a smile. That doesn’t stop Eleanor from trying to bust down the door, estimating that it’s only about four Oreos thick and bemoaning how tantalizingly close they are: “We’re four Oreos from heaven!” Chidi, though, calms her down with a deep breath — look at Chidi being the less anxious one! — and encourages her to appreciate that they’re in this together… and in love. In fact, while they wait, he suggests they take the opportunity to go out on their first official date. So they share a bottle of stolen Champagne and swap childhood stories, and it’s all very adorable.

Michael takes advantage of Gwendoline’s good-natured naiveté and sneaks in a call to the Good Place committee, demanding a meeting to reveal his findings about how no one has made it into the Good Place in more than five hundred years. He’s greeted by the gratingly upbeat committee — led by The League alum Paul Scheer — who earnestly listen to his complaint. They do point out there have been lulls before (“Remember, like, two hundred thousand years ago, when they invented stabbing? And they’re all just, like, stabbing each other?”), but they vow to take swift action: They’ll spend the next four hundred years forming an investigative team, and then another thousand appointing a blue-ribbon committee to investigate… themselves. “We’re the good guys,” they tell an impatient Michael. “We can’t just do stuff.” 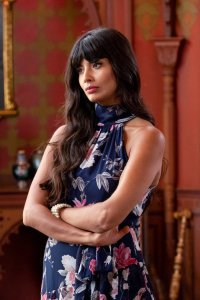 Tahani, meanwhile, tries her hand at being selfless when Jason admits he can’t stop thinking about Janet’s virtual love shrine to him. He’s not sure how he feels about her, and Tahani pushes him to talk to her about it directly. That backfires, though, when Janet gets embarrassed and confused by all these emotions she’s suddenly feeling: “What if they come out my butt?” Tahani thinks she can solve things by writing up a “Death Did Us Part” certificate, declaring that since they’re dead, she and Jason are no longer married. But Janet’s not happy — “I feel both pitied and put on the spot… so that’s fun” — and everyone ends up in tears. (Thanks a lot, Tahani.)

Chidi and Eleanor’s date goes south, too: He tries on a mailman outfit for her (it’s one of her many kinks), but that just makes her burst into tears. She’s so happy with Chidi, she admits, she’s afraid of losing him. He encourages her not to worry about the future and focus on living in the moment — seriously, who are you, and what have you done with Chidi?! — and they sneak upstairs to, uh, consummate their new union. Michael is still despairing, though: He tells Tahani that while the Good Place committee deliberates for a few centuries, good people like Doug Forcett will continue to suffer. But when she complains about trying to do something nice for Jason and Janet and seeing it blow up in her face, it sets off a light bulb above Michael’s head.

He digs through his Book of Dougs and notices a discrepancy: One Doug gave his grandmother flowers and earned 145 Good Place points, while another Doug did the same thing and actually lost four points. It’s all about unintended consequences: The second Doug used a smartphone made by a kid in China, bought roses raised with pesticides… Michael realizes that “every day, the world gets a little more complicated, and being a good person gets a little harder.” So when Gwendoline discovers their ruse and threatens to turn him into the Judge, Michael replies that he already did that. He’ll meet the Judge at the IHOP — the Interdimensional Hole of Pancakes, aka “the most dangerous place in the universe” — in a last-ditch attempt to save humanity. Yep, no pressure there! 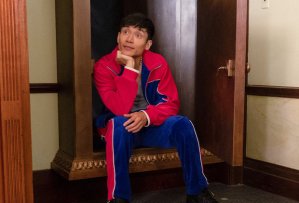 * Jason determining this can’t be the Good Place: “I don’t see any go-karts, much less go-karts being driven by monkeys wearing sunglasses and Hawaiian shirts.”

* Eleanor, after throwing a lamp at the door to the Good Place: “This is how I always got out of escape rooms! If you break enough stuff, they open the door and kick you out!”

* Tahani, noticing that Jason looks distraught: “Jason, you seem thoughtful… and that concerns me.”

* The Good Place committee snapping into action: “Kellen, head to the farmers’ market and grab us fresh peaches.” “I think pluots are in season.” “Then get us pluots, Kellen! Get as many as can fit in your tote bag!”

* Chidi, confessing a childhood indiscretion: “It’s like when my parents would go to a symposium, and I would sneak into their office and read the unabridged dictionary!”

* Jason, explaining how he and Tahani got together: “Tahani and I met in brain school, and then we got married because nothing mattered.”

* A crying Eleanor noticing that her tears “taste like the nacho cheese from my favorite movie theater. That’s a weird incentive to keep crying.”

* Michael: “How do you make Jason happy? You give him a lollipop shaped like a Transformer.”

* Jason breaking into sobs when he sees Janet and Tahani crying: “I just like being a part of things.”