If you’re a fan of The Good Place‘s ever-chipper virtual assistant Janet… well, you got an early Christmas present this week. 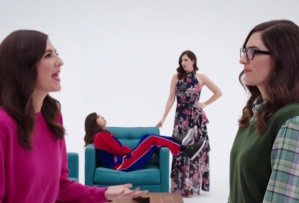 In Thursday’s fall finale, Michael and Janet pulled the four humans into Janet’s void, where they experienced some slight “side effects”: They all took the form of Janets, with D’Arcy Carden playing all four parts. While Michael and Janet searched for answers in the afterlife accounting office — meeting yet another Janet there, the dead-in-the-eyes Neutral Janet — Eleanor, Chidi, Tahani and Jason all hung out together in the void, with Carden mimicking each of her co-stars. (It was truly a treat to watch her play that lovable dum-dum Jason.) Eleanor and Chidi even finally realized they’re in love, all while still in Janet form.

It all added up to a very busy week for Carden: Executive producer Michael Schur had an assistant editor tally up her total screen time in this episode, he told reporters at a recent screening, and “the answer is well north of 40 minutes… D’Arcy’s in this episode twice as much as anyone actually can be in an episode.” It was a lot of work for the producers and crew, too, he admits: “Close to a year” of planning went into the special installment, starting “right after [production of] Season 2 ended.”

The Good Place team admits to some jitters about tackling this particularly ambitious installment of an already ambitious show. “The first day of shooting, there was just a little panic about, ‘What if none of this makes sense?'” Josh Siegal, who co-wrote the episode with Dylan Morgan, remembers. (“That’s been my panic since day one of the pilot,” Schur adds with a laugh.) But they found reassurance in another TV show with an actor playing multiple roles, Schur notes: “We were like, ‘Can this be done?’ And then we’re like, ‘Orphan Black did it like a thousand times’… so that show gave us a boost, I would say.”

To ensure that Carden properly embodied her co-stars, “we got the actual cast to do the scenes” in the void, Schur reveals, “and we filmed it so that D’Arcy could watch their mannerisms.” Carden admits she watched that recording “one million times. Like, daily.” She also made an audio recording of the full cast reading the script at the table read, “and I didn’t listen to music for a month. I only listened to that… I lost my mind, you guys. I went crazy.” 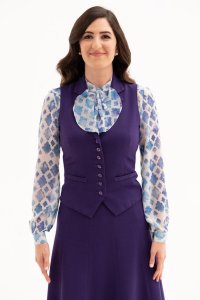 Filming the episode involved a lot of Carden acting by herself on a white soundstage, she recalls: “I would either be acting with a pole with a piece of tape on it, or sometimes stand-ins with a Janet-y wig.” For the final climactic kiss between Eleanor and Chidi, “there was a long pole with a literal pair of plastic lips, exactly at my lip height… so I had to sort of hug air and kiss these lips.” Then Carden had to kiss co-star Kristen Bell, but it wasn’t very romantic: “Every inch of us had to match… We had to be pressed against each other, in a not very sexy way at all. It was like surgery, almost.”

As far as playing four of her co-stars at once, “it’s not necessarily hard to play five different characters,” Carden says, “but it is hard to play five really well-established characters that I’ve known for years now.” Jason and Tahani were “easier to play, because they have more specific characteristics,” but Kristen Bell’s Eleanor “was very hard… it’s, like, so subtle.” Schur commends Carden on picking up a couple of Bell’s signature moves, though: “One is, you put your hands in your back pockets, which is classic Kristen Bell. The other thing is, you say, ‘No, no, I git it.’ [Kristen]’s from Michigan, and one out of a thousand words has a Michigan accent.”

With the massive amount of planning and visual effects that went into it, Thursday’s episode “was the opposite of how we usually make television,” Schur admits. “It’s usually so fun and light and fluffy. Everything was to the millimeter.” Plus, Schur and the writers weren’t sure if the void full of Janets could sustain a full episode: “If it’s just that, then it’s sort of gimmicky, and it doesn’t feel that interesting.” But it all fell into place once they tied the humans-as-Janets idea to Eleanor and Chidi’s debate about the state of their relationship: “She’s literally asking herself, ‘Who am I? What version of me am I right now?’ And so is he.” And Carden was more than happy to get an opportunity to spread her wings: “It was one of the best weeks of my life… in a weird way.”

Got thoughts on tonight’s Janet-heavy Good Place? Drop ’em in a comment below.