You’re the Worst returned for its fifth and final season on Wednesday — but it’s understandable if you thought maybe you recorded the wrong show. In fact, none of the show’s main characters even appeared until more than midway through the season premiere. Instead, it chronicled the totally ’90s love story of video store clerk Jake and cute customer Gemma, who bonded over a shared appreciation of sad, obscure movies no one else liked. To earn a date with Gemma, Jake hunted down an exceedingly rare copy of an artsy film called The Intransigence of Love… and convinced her to ditch her douchebag boyfriend in the process. 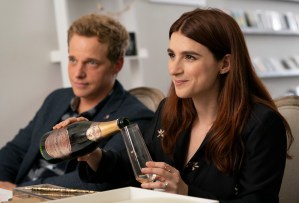 Only after a couple of commercial breaks did we learn that the whole Jake and Gemma tale was a fiction conjured up by Jimmy and Gretchen, telling a pair of prospective wedding planners that it was their love story. We then saw Jake and Gemma go their separate ways and reunite in sweeping rom-com fashion, now with series stars Chris Geere and Aya Cash playing the parts. It was a sharp left turn for the series, but Gemma’s appreciation of Jake’s art-house movies did seem to mirror Jimmy and Gretchen’s own love story: “They aren’t perfect, but they’re not trying to be. They’re messy and complicated, because life is messy and complicated.”

If you were confused by the switcheroo, you weren’t the only one. “We got a little pushback” from FXX about the idea, creator Stephen Falk admits, and he understood their concerns: “People are coming back to watch our show, and we’re providing them with something completely different.” But still, he stands by the episode: “If you watch it through the reveal, it makes a lot of sense… It all works, I think, in a holistic way that doesn’t make it feel stunt-y.”

Jake and Gemma’s story “came out of my love for rom-coms,” Falk explains. “I sort of felt like I’d been doing this anti-rom-com, so to speak, as it’s been touted… I didn’t want our tiny little legacy to be that we were somehow standing outside of rom-coms, because we love them, and I love them. I always wanted to see if I could make a little rom-com within the show, and my writers and I came up with this.” Plus, setting the story in the 1990s “allowed us to do a ’90s rom-com homage, everything from Reality Bites to Notting Hill to She’s All That. It really satisfied a lot of urges for us.”

What’d you think of the You’re the Worst premiere: fun departure, or total waste of a half-hour? Grade it in our poll, and drop your post-premiere thoughts in a comment below. (And for more from Falk on YTW‘s final season, click here.)