Wedding bells are ringing on You’re the Worst… or maybe that’s just the throbbing in Jimmy and Gretchen’s skulls after yet another hangover?

FXX’s acid-tongued rom-com kicks off its fifth and final season this Wednesday at 10/9c with thoroughly selfish lovebirds Jimmy and Gretchen preparing to walk down the aisle — but do they even have a chance at making it all the way to “I do”? The final season represents a twist on the age-old “will they/won’t they” question, creator/executive producer Stephen Falk tells TVLine. “Will they sleep together? Well, they’re sleeping together within five minutes of the pilot. But we do get to play with that question of will they or won’t they get married” in the final episodes, starting with a surprising premiere that Falk concedes is “a little weird,” with the freshly engaged couple “dipping their toe into the wedding-industrial complex.”

Even though You’re the Worst‘s end was announced by FXX back in November 2017 as a “mutual decision,” it was ultimately “the network’s decision” to wrap up the series after five seasons, Falk admits, adding that “we probably could’ve done one more.” But “it felt right to me, in terms of five seasons,” he says, and getting the news early “gave us an opportunity to do a final 13-episode season [and] really bring it to a close… this was a nice way to bring it home.” 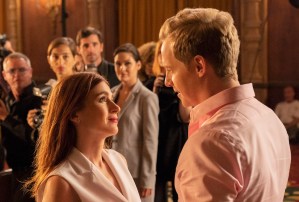 You’re the Worst has always been billed as a sort of “anti-romantic comedy,” but Falk actually rejects that classification: “Anti is against, and we’re not that.” In fact, “the thesis of the show is very much that if you lay all your s–t out on the table at the beginning, you almost erase the fear of surprise judgment, of being found out,” he points out, and “by doing that, Jimmy and Gretchen actually represent something very affirming and something aspirational in terms of a relationship.” Their roller-coaster romance has hit all the traditional markers of a rom-com, too — saying ‘I love you,’ moving in together, breaking up and making up — and “in this final season,” Falk teases, “we’re kind of reaching the apex of that, which is exploring what it means to make that marriage commitment… or not.”

So how do a couple of immature narcissists like Jimmy and Gretchen approach tying the knot, exactly? “When planning a wedding,” Falk warns, “often one person in the couple kind of takes the lead, and one displays a much, much lower level of enthusiasm… which can lead to resentment and arguments and problems.” (Got any guesses as to who’s who in this case?) The approaching nuptials also have a huge ripple effect on their BFFs Edgar and Lindsay, with Falk hinting that it might make “them feel panicky, perhaps, about their own romantic situation, or just completely reevaluate the friendship, as this impending date happens.” 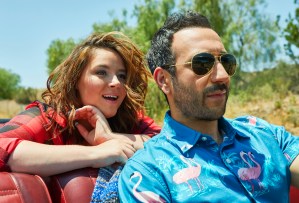 Yes, Edgar and Lindsay are still, ahem, enjoying each other’s company as Season 5 kicks off, and “in some ways, Edgar and Lindsay are better equipped to be together” than Jimmy and Gretchen, Falk notes. “They’re less demanding. They certainly seem to take things a little less seriously.” But “I don’t think we’ve ever suggested they’re the great loves of each other’s lives,” he adds. “While they do find comfort in each other’s beds, and private parts, they don’t necessarily see each other like that.” In the final episodes, though, “we’ll certainly see them question whether there is more there.”

This all leads up to a series finale and an ultimate choice that “you don’t exactly see it coming, but in the end, feels like exactly the right decision for Jimmy and Gretchen,” Falk teases. Plus, keep your eyes peeled for an epilogue — and perhaps a flash-forward? — after the big day: “We don’t leave it exactly right there, I’ll say. It doesn’t end where it ends, in terms of linear time. In the finale, there’s extra bonus information that I think is going to make a lot of people happy.”

Alright, Worst-ies, do your worst: Drop your Season 5 predictions in a comment below.