When you’re seriously considering whether you’re #TeamPoodle or #TeamBee, it can only mean one thing: The Masked Singer is back for another round.

Episode 2 included three new match-ups: Rabbit vs. Alien, Pineapple vs. Raven and the aforementioned Poodle vs. Bee. Before we get to the details, you might want to have some snacks handy, because this week’s unmasking is likely to give you the munchies. Now let’s review the battles! 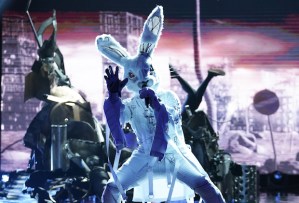 RABBIT VS ALIEN | Right from the top of the show, the panelists noted how the person wearing the Rabbit costume really committed to the character, mainly by twitching his head a lot. “I’ve spent most of my life on stage, but I was never alone,” Rabbit said in his pre-performance package, noting that he was well-versed in “synchronized singing” and that he’s performed in a mask before. “You’d better believe the last mask standing is gonna be me,” he added. Given all of those clues, he’s gotta be a non-Timberlakian member of *NSync, right? After his (very good) performance of Ricky Martin’s “Livin’ La Vida Loca,” my guess is J.C. Chasez. Alien — whose costume “looks like a sexy toothbrush,” panelist Ken Jeong noted — talked a bit about how anonymity “is a completely alien concept” in her family and how she’s used to being controlled. Her rendition of Portugal. The Man’s “Feel It Still” was better than I expected it to be, and the panelists seemed to think that she’s a model, based on how she stood with a cocked hip throughout the post-song Q&A. That’s also when she let us know that “I have many sisters.” (My guess: a Kardashian, possibly Kendall Jenner. And yes, this will probably be my guess for any future tall-ish female who talks about having female siblings.) Winner: Rabbit! 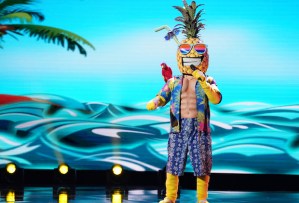 PINEAPPLE VS RAVEN | Raven, a female, made a point of saying how she’s spent a long time listening to other people’s stories, and “this is my opportunity to share mine… no one talks more than me.” She also mentioned that she’s had a recent tragic loss and hoped to “honor my beloved” via taking part in this cracked-up show. Different strokes for different folks, I guess! She sang “Rainbow” by Kesha, which made it clear that she was not a trained vocalist. During the panel-guessing section, Raven confirmed that she hosted a talk show. (My guess: Ricki Lake.) In his set-up package, Pineapple said he beat a life-threatening disease, and the camera lingered on a Michigan license plate that read 52438T. “Seize the day before your dreams go up in smoke,” he added. I’m gonna be straight with you: Pineapple can’t sing, as his version of Gloria Gaynor’s “I Will Survive” showed us, and he doesn’t really dance. (My guess: Cheech Marin or Tommy Chong.) 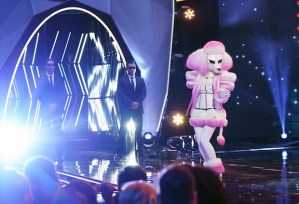 POODLE VS BEE | Poodle hails from San Francisco, where she grew up in a musical family “but I’m known for a different kind of talent,” she told us in her video. “My whole career has been about exercising my right to free speech,” she added, and “To figure me out, you’re gonna have to work!” She sang Pat Benatar’s “Heartbreaker” — rather well — and made a cryptic comment (“I’m here for your honor”) in response to the panel’s questions. (My guess: I have no clue.) Bee, also female, alluded to having a long career — which started in the 1950s — and referred to herself as an empress. She showed off an impressive set of pipes during “Chandelier” by Sia. (My guess: Gladys Knight, though I’m not feeling strong about it.) Winner: Bee!

THE UNMASKING | Of the bottom three, Pineapple got this week’s unmasking… and he’s Tommy Chong — whom panelist Jenny McCarthy correctly guessed earlier in the hour.

Did you guess the identity of this week’s unmasked singer? Hit the comments with your thoughts on the episode.