A mention of 21 Jump Street might make you think of Johnny Depp’s first big TV gig, or maybe of the big-screen adaptation that followed decades later.

But for The Kids Are Alright star Michael Cudlitz, Jump Street brings to mind one thing: a bakery box full of his unmentionables.

The late 1980s Fox drama was Cudlitz’s first acting job, he tells TVLine, and he booked the role of Dennis Richards right as the episode went into production. So he was put on a late-night flight to Vancouver, where the series shot, and was instructed to be on set first thing the next morning.

“It was a snowstorm going on, so I got to the hotel late,” he recalls. “I got to my room about 1:30, 2 o’clock in the morning, and I had a 5 a.m. pickup.” He slept for a few hours and then got where he needed to go; the scene in question happened to be exactly the material he’d auditioned with, and everything went fine. “I had an amazing day,” he says.

That is, until he returned to his accommodations.

“I get back to my hotel after a long, cold day on set, and my luggage is nowhere in sight,” he says. “I look around, and I’m like, ‘All right, don’t freak out… It’s a pretty fancy hotel, as far as I’m concerned… so I’m like, ‘Oh, maybe they put your stuff away for you.’ So I started looking through the drawers.” Nada. Finally, he called down to the front desk. “It turns out, because I got in so late and left so early, when they came in, they didn’t think I had checked in yet,” he says. “So they cleaned the room for me. They took everything!”

Memories From the Set: Michael Cudlitz 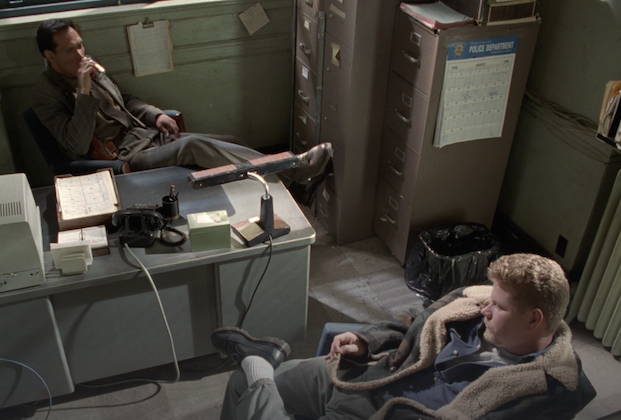 There’s a little more to the story, and it involves a laundry snafu, but all you need to know is this: “I come back at the end of the second day, and everything’s clean and folded,” Cudlitz says, laughing. “The first time I have ever gotten my undergarments delivered to me in a cake box. It’s fancy, right?”

Sadly, we were unable to eke any more stories about undies and/or pastry containers out of the prolific actor. But, in advance of The Kids Are Alright‘s winter premiere tonight (8:30/7:30c), we were able to get him to reminisce about a few of his big TV jobs over the years. Click through the gallery above to see what Cudlitz has to say about his time on Southland, Buffy the Vampire Slayer, The Walking Dead, Lost and a bunch more series.