Raymond Reddington will not pass “Go” or collect $200: He’s going directly to jail.

In the second half of The Blacklist‘s two-part Season 6 premiere, James Spader’s crafty character landed behind bars after expertly evading the authorities for three decades. Shortly after helping the FBI foil a bomb plot at the United Nations building, Red stopped by one of his favorite pretzel carts for a celebratory snack, only to be apprehended by a nearby cop who became suspicious of him.

As Red informed Liz at the end of the episode, it’s not the jail time that bothers him; it’s the gut feeling that someone in his inner circle must have betrayed him and alerted the cops to his whereabouts. While sitting in his cell, Red tasked Liz with finding out who the traitor was — but, unbeknownst to him, Liz was the traitor, and she’s the reason he now faces a life in prison. (Or the death penalty, if the prosecutors get their way.)

TVLine spoke with series creator Jon Bokenkamp about Liz’s decision to report Red to the authorities (a choice she made with half-sister Jennifer), as well as the proverbial “chess game” that awaits Liz and Red in the episodes ahead.

TVLINE | You had previously confirmed that at the start of Season 6, Red legitimately had no clue that Liz knew his big secret. But in the final moments of Episode 2, it seems like they’re both circling the truth without wanting to say it. Now that Red is in jail, has he become any more suspicious of what Liz knows?
I am the first person to say, “Well, we should wonder about how much he knows.” But I think it’s best to be completely straight with you: He doesn’t know. He is genuinely caught off guard by [getting arrested]. He was caught buying a pretzel. [Laughs] We thought it was fun that the most wanted man in America wasn’t caught doing some crazy heist; he was caught, like many of these people are, in a very benign situation. And yet, that stinks to him. He knows that it can’t be that simple. He knows that somebody has betrayed him. But he does not know that it’s Liz. That doesn’t mean he won’t figure that out, and if and when he does figure that out, there may be some fireworks.

TVLINE | At the end of the episode, Liz asks Red if he plans to kill whoever his traitor was, and he says, “I think it depends.” I know you can’t reveal what happens down the road, but in your opinion, would Red even be capable of hurting Liz if he found out she betrayed him?
That’s a good question. We’ve seen so often that Liz is his kryptonite. She can do to him what no one else can. But he’s never been incarcerated in this way. This is a betrayal like no other, and I don’t know how he would bounce back from that. I think that’s something Megan [Boone] did a beautiful job of playing at the end of this two-parter. She’s probably less worried about Red in prison, although that has significant consequences; I think she’s probably more concerned about what it means for him to find this person that betrayed him. That’s more important to Reddington, and Liz knows that, and she knows she’s playing with fire. But I don’t blame her one minute for the decision she made to sideline Reddington, who is always very slippery and has a way of finding the truth and circumventing the FBI. It’s a great move on her behalf so she can stay one, two, three steps ahead. 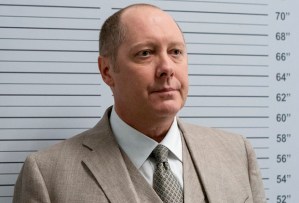 TVLINE | And now Liz is in this position where she needs to pretend she’s searching for a traitor in Red’s inner circle, even though she already knows who it is.
Right! And it’s not only that she’s searching for a traitor within his world. It’s also keeping up the story that she is his daughter. She now knows that he is not her father. Raymond Reddington was her father, and this man — who she’s now supposed to feel sorry for, because he’s been arrested and there’s legal jeopardy for him — she’s having to pretend that she cares deeply for him. And in some ways, maybe she still does. But that’s something that’s really fun to watch unfold this season, where you have this chess game happening between Liz and Red. It’s the stories of who they are, and the mysteries that they’re working in the shadows.

TVLINE | Will Liz need to cast suspicion on her fellow task force members? We saw her do that a little bit in this episode, where she half-accused Ressler of being the one to report Red.
She will, and it’s not only potentially casting doubt on others in the task force. It’s casting doubt on others in Red’s life — those who are closest to him. And now that he has a target on his back, we’ll have to see who stays with him, who’s loyal, who can weather the storm of someone like this going to prison. It creates a really unique dynamic. And keep in mind that, at the moment, the task force doesn’t know that Red’s not Red, and they don’t know that Liz turned him in. So Liz has this great secret that she’s not only keeping from Red, but she’s keeping it from the people she’s working with, and that is very different territory for us.

TVLINE | Liz is dealing with some serious inner conflict right now, because she’s torn between wanting Red in jail and knowing that he’s actually saved hundreds of people by working with the FBI. Will she continue to grapple with that in the weeks ahead?
Liz recognizes the situation that she’s created. And I don’t blame her; I blame Reddington. She has taken a step that will cause real fallout. But what other choice does she have? She can’t just confront him and say, “Hey, Fake Dad. Here’s what I found out.” [Laughs] She can’t really go to the police; every time she goes to the police, Red finds a way to slither around it. So I respect her choice to do that, but I also respect that she is fully aware that this creates a big schism between her and Reddington and the task force.

It’s really fertile ground for us for storytelling, because one of the things that’s difficult to do is to find “firsts.” Those are always the most fun in stories, and six seasons in, it’s difficult to find that. And yet, I think we have some of our best “firsts” yet in Season 6. We have Red being incarcerated with a potential pending trial; we have Liz in the driver’s seat, five steps ahead of Red; we have Red working desperately to find out who betrayed him, even though the audience is ahead of him and knows that it was Liz. We have a really unique Rubik’s cube of stories that we get to twist around this season.

With that, I hand it over to you. What did you think of Part 2 of The Blacklist‘s premiere? Grade it in our poll below, then hit the comments with your thoughts!