There’s nothing visually NSFW in the first trailer for Netflix’s upcoming Sex Education, but if you’re watching at work, you might want to plug in some headphones.

Because the first preview of Gillian Anderson’s latest TV gig, true to its title, includes frank discussion of the birds, the bees and a whole bunch of body parts.

The series follows Otis Milburn (played by Ender’s Game‘s Asa Butterfield), a British teen who lives with his sex-therapist mom Jean (Anderson) and who has grown up in an environment where sex and everything associated with it is discussed in frank, monotonous detail.

“I wish my mom was a sex guru,” a friend tells Otis near the start of the trailer. “Trust me,” the boy replies flatly, “you don’t.”

But when Otis’ classmates learn that he has inside scoop on all things naughty, it becomes an opportunity for the socially awkward teen to rise in his high school’s social standings. Pretty soon, he and a tough girl named Maeve are starting an underground therapy clinic for their peers to explore everything they want to know about sex but are too afraid to ask. (If the premise sounds rather implausible, don’t worry: That’s addressed in the video, too.)

Press PLAY on the trailer above to begin your Sex Education — including hearing Anderson emit the perfect sultry “mrrow” — then scroll down to see the series’ poster (click on the image to see it in full). Finally, hit the comments: Will you watch Sex Education when it premieres on Friday, Jan. 11? 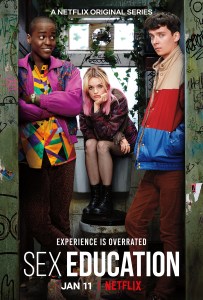