The wedding night. The abbey. Faith. Culloden. The print shop. There are some Outlander moments that are so important, you’ve got to watch them again and again. After Sunday’s episode, Jamie and Brianna’s first meeting joins that list — and we’ve got your exclusive, behind-the-scenes look at the big moment right here. 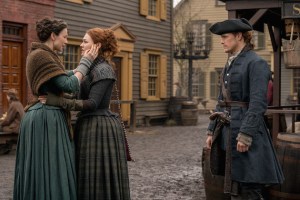 In the video above, cast members Sam Heughan, Caitriona Balfe and Sophie Skelton break down the Episode 9 scene in which Jamie first meets his daughter, whom Claire gave birth to and raised in the 20th century while he stayed behind in the 18th. They remark on the less-than-ideal circumstances of the big moment (“Jamie Fraser is relieving himself as his daughter arrives,” Heughan notes, chuckling) and the amazing coincidence that both Mr. and Mrs. Fraser happen to be in Wilmington when their daughter arrives (“Jamie and Claire could be anywhere,” Skelton says).

As we watch Brianna meet her father for the first time, Heughan takes us inside what his character is thinking. “When he first sees her, he doesn’t quite recognize her,” he says. “It’s hard to say what he feels. He feels everything.”

Don’t worry — we also get a good look at Claire’s reunion with Bree, including the sassenach’s open-mouthed shock at being in her child’s presence once more. “The person Claire loves more than anything in this world is Brianna,” Balfe says, adding,”She thought she may never see her daughter again.”

Press PLAY on the video above to re-live the highly emotional sequence from “The Birds and the Bees,” then hit the comments with your thoughts: Did Bree’s reunion with her parents live up to your expectations?