The last time This Is Us showed us The Big 3 as high school seniors, the future looked bright… for Randall. Meanwhile, Kevin‘s budding problems with alcohol and Kate’s weight gain in the wake of their father’s death continued to get worse, leading the pair to announce to mom Rebecca that they weren’t planning to attend college like their brother. 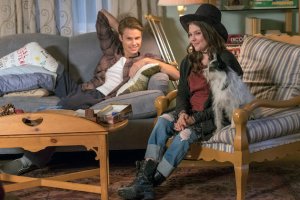 Logan Shroyer, who plays teenage Kevin, is bound to secrecy regarding what will happen when the NBC drama returns from winter break (Tuesday, Jan. 15). But recently, he did give TVLine an intriguing hint about how to divine what might be ahead for the grown-up Pearson kids in the back half of the season.

“I can just say that if anybody wants to do the research and look back at scenes and things that are discussed, like what is Sophie doing, and where Kate’s dreams lie and stuff like that, you can probably deduce what’s going to happen, or some possibility of what’s going to happen,” he said, “because the writers are very specific about the stuff that they bring up.”

Shroyer continues that every decision made in the hit show’s scripts is done with care: “They’re not going to set up something for nothing.” (Exhibit A: That jaw-dropping revelation in the fall finale, which showed us that Jack’s long-presumed-dead brother Nicky actually is alive.)

The young actor points out how his part of the Kevin-Sophie story — the high school love years — eventually becomes something much different, aka the couple’s eventual marriage, divorce, reunion and breakup, as portrayed by Justin Hartley and Alexandra Breckenridge. “We just don’t know how we get there,” he adds, laughing. “I’m really interested to see that, because I definitely don’t know everything.”