That absolute nothing that you hear is the sound of us being too scared by The Walking Dead’s Season 9B key art — and our first glimpse of new cast member Samantha Morton as the Whisperers’ leader, Alpha — to so much as gasp.

And yet, creeped out though we may be, we can’t bring ourselves to stop looking at the new images released on Wednesday by AMC. 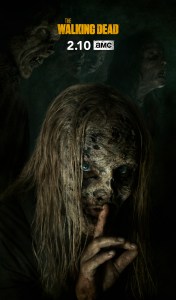 According to the network, the back half of Season 9, which kicks off on Sunday, Feb. 10 (9/8c), “finds our groups of survivors… in undeniable danger. They will soon realize the world just beyond does not operate as they thought… A whole new threat has crossed their paths, and they soon discover it’s unlike any threat they have encountered or endured before.”

Actually, they kind of already know that, since in the midseason finale, Daryl discovered that the “walker” that killed Jesus was actually a regular guy wearing a zombie-skin mask. In the aftermath of that revelation, “the group will start to question what they think they see,” AMC continues. “What may appear to be normal in this post-apocalyptic world could actually be more disturbing and terrifying than when the apocalypse first broke out. All that is certain is the stakes are high and numerous.”

What do you think of Morton’s Alpha mask? Chilling, no? Click on any image to see it full fize, then hit the comments.