Warning: The following contains spoilers for Sunday’s midseason finale of The Walking Dead.

A lot went down in Sunday’s midseason finale of The Walking Dead: We found out about a new relationship, picked up clues as to why Michonne’s friends list was so much shorter than it used to be, and discovered just how crappy security was at Alexandria’s one-inmate prison. But let’s be real: In the end, it was all about the Whisperers and the dread that they spread across the post-apocalyptic canvas like so much fog (which, coincidentally, also figured heavily into the goings-on). Who became the new villains’ first casualty? Read on and find out. 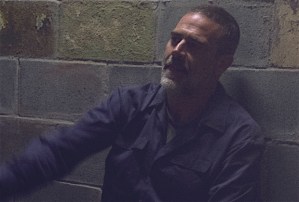 ‘IT’S LIKE THE OLD GANG’S BACK TOGETHER’ | As “Evolution” began, Daryl, Jesus, Aaron and Dog were briefly distracted from their search for Eugene by the bizarro sight of a herd just milling about. “That’s not normal,” they agreed. When we cut to Alexandria, we learned that Gabriel had been doing his best to counsel Negan since his meltdown. But the Saviors’ former leader was as happy as a clam now that he had a tennis ball to bounce off the wall all day. And the new window in his cell reminded him of TV — “and I loved the s— outta TV back when that was a thing!” When the preacher pressed on, suggesting that “a life needs to have meaning,” Negan changed the subject to things he was able to overhear beneath his window — for instance, things that Rosita had said, and not about her boyfriend! No sooner had Gabriel left in a huff than he spotted C. Thomas Howell across the way and learned that the Hilltop had Rosita. (Technically, I don’t think CTH was in this episode, but we were clearly meant to think we’d seen him.) 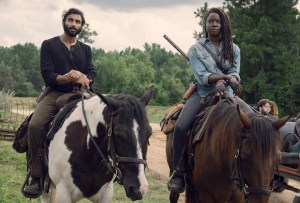 When Michonne and Siddiq arrived at the Hilltop, the newbies fretted that maybe they wouldn’t be accepted there. Although “what’s not to like about us?” Luke asked rhetorically. “We’re a solid-looking group. We’re scrappy.” Once they were allowed past the gate, Michonne played what to her must have felt like a long and irritating game of What Else Have People Been Keeping From Me? as she found out from Tara even more of the folks who’d remained in contact. After Tara informed the newbs that their fate couldn’t be decided until Jesus returned, grumpy Michonne brightened upon seeing Carol… who, rather than greet her old friend, turned around and went back inside. So it was back to grumpy for Alexandria’s security chief, who couldn’t believe that Siddiq was secretly communicating with other communities. Shortly thereafter, he got a big hug from Carol. And Michonne? Yeah, no hug for her. She told Carol that she’d gotten Ezekiel’s letter and was sorry to hear about the Kingdom’s troubles but no more interested than she ever had been in sending a delegation to the fair. From her POV, there was “a whole lot of broken world” between the communities. As such, “we’ve gotta take care of our own now.” 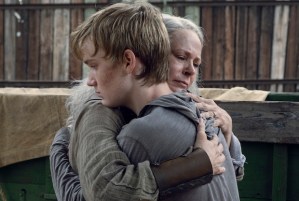 ‘I’M GONNA MAKE YOU PROUD’ | Later, while the search for Eugene continued, Aaron suggested to Jesus that he could be a great leader if only he’d stop fighting it. Not sure we’ve seen a lot of evidence of that. But anyway… they were soon surprised to find that the mystery herd was coming for them — and it had doubled in size, making it an even worse kind of mystery herd than it had been before. Back at the Hilltop, Henry and Carol said their goodbyes, and whether you related in that poignant moment to the kid or the mom, the scene still had to have slayed you. (Then again, Melissa McBride is so good, she could probably make me cry reading Green Eggs and Ham!) In no time, Henry was learning from Alden how to make a spearhead… which he wanted to plunge directly into his heart at the sight of Enid kissing the older guy. His crush already spoken for, yes, Henry was available to hang out with Earl and Tammy Rose after work. 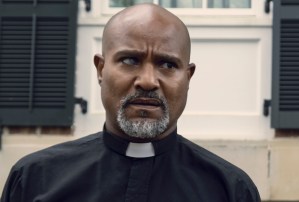 In Alexandria, Negan went from being obnoxious with Gabriel to being downright intolerable, prompting the preacher to go off on the baddie for keeping him from immediately running to the Hilltop to see how badly injured Rosita was. Somewhere along the line, it had apparently become Gabriel’s job to be responsible for Negan. (Wait, Enid can be basically a doctor now, but nobody but Gabriel can change Negan’s bedpans? In a community as big as Alexandria?) Before storming off again, the preacher huffed that “it’s bad enough I’ve gotta clean up your s—, I shouldn’t have to listen to it, too!” At the same time, the Hilltop’s younger set, comprised of Gage, Rodney and Addy, invited Henry — or, as they dubbed him, Huckleberry — to sneak out with them that evening and lose the hangdog expression he’d been wearing. Despite his plans with Earl — I could see Carol shaking her head in my mind! — the boy said yeah, sure. 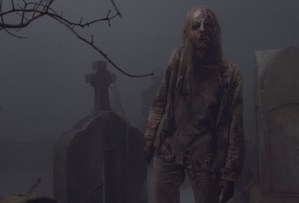 ‘THIS WASN’T A NORMAL HERD!’ | Before Rosita awakened in the Hilltop’s infirmary, Siddiq apologized to Michonne for keeping so much from her. In response, she admitted that she’d known people would still be angry at her, presumably for cutting off Alexandria from the other communities. But “it doesn’t make it any easier.” And she still refused to mend fences, “not the way they want me to.” At least she believed that her unpopular choices were the reason that her old friends were still alive to hate her. When Rosita at last regained consciousness, she immediately wanted to get out of bed and lead a group to the barn where she’d hidden Eugene. Daryl & Co., she said, “have no idea what they’re dealing with!” That night, once the missing brainiac was found by the search party, he seconded that emotion. In fact, he tearfully explained to his rescuers, the herd had already been past the barn twice looking for him. What’s that, Dog? Ack! The herd had returned again! 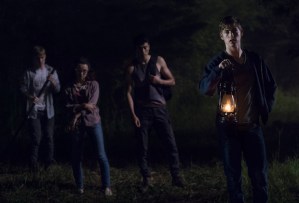 At the same time, Henry — who sparked sweetly with Addy — reluctantly got his drink on with his new friends in a makeshift rec room outside of the Hilltop. “If this is your idea of fun,” he joked, “I hate to see what happens when you get bored.” Turned out, the guys were only too happy to show him what they did when they got bored: They tortured a walker they’d trapped in a hole. To no avail, they’d at first used a cat as bait, explained Gage, immediately moving himself to the top of my s— list. As Addy, clearly wanting no part of this, walked off — I knew I liked her — Henry leapt into the hole and put down the walker. Why’d you do that? asked Gage. “If I have to explain it,” Henry replied, “you wouldn’t understand.” Meanwhile in Alexandria, Negan discovered that… what the… ? Gabriel hadn’t locked — or hadn’t correctly locked — his cell. And as he realized he was a free man, a wicked look crossed his face that made me wonder when we’d see more of those new shades of the character we were promised.

‘THE WALKERS ARE EVOLVING!’ | On the run with Jesus, Aaron, Daryl and Dog, Eugene floated a theory that the walkers were evolving. He knew it sounded crazy, but the dead roaming around was pretty crazy, too. And “the brain is alive,” he added. “If it’s alive, it can change, and maybe it can remember things, too, like how to talk.” Or — even scarier — how to strategize and hunt, Jesus suggested. As a chill went down both Dog and my spines, Daryl insisted on staying behind with his four-legged friend to distract the herd so that Jesus and Aaron could get away with an injured Eugene. (Oh, Dog, we hardly knew ye!) At the Hilltop, Tara led Earl to the drunk tank and reported that Henry “threw up on a pig and then my boots.” The alcoholic didn’t need to be told what had happened — he could guess from the “reek of crappy moonshine” coming off Henry. Well, if that was how the kid honored his commitments, he could just pack for home. It wasn’t that, Henry explained. “I saw my mom cry today” — and, in that moment, he’d realized what a big deal his being at the Hilltop was. He’d just wanted to escape from that feeling for a while, that was all. 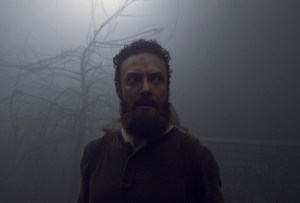 As the episode neared its conclusion, Daryl used a firecracker to draw the herd — which seemed foolhardy, as it could have spooked Dog and sent him running. (Yes, I’m all about Dog now. Deal with it.) To the pair’s astonishment, the herd ignored the noisy, colorful lure and instead followed Jesus, Aaron and Eugene into a graveyard lined with a spiked gate (that, unless I miss my mark, is serious foreshadowing). The trio made it through the foggy burial ground to the far side, only to find the exit door stuck. With no time left to hoist Eugene over the fence, they had to fight. As the whispers around them grew louder, out of nowhere, Michonne appeared! And Magna and Yumiko! What were they doing there? “Earning our keep,” Magna told Michonne. When finally, the group got the gate opened, Jesus stayed behind to delay the walkers. And had he only been fighting walkers, he probably would have been fine. But as one plunged Jesus’ own sword into his back and muttered, “You are where you do not belong,” we knew that these weren’t just walkers.

‘THEY’RE TRAPPED’ | Quicker than you could say “too late,” Daryl, Michonne — everyone — rushed back in to fight walkers off Jesus. As Aaron wept over his fallen pal, Daryl realized that Jesus’ killer was wearing a mask, under which was… yup. Just an ordinary, murderous guy. And while that was certainly valuable intel, it didn’t seem like it was going to do the gang much good in that exact moment. Because, as Dog barked in the distance — dare I hope, a safe distance? — the Whisperers said in their terrifying, hushed tones that they had the interlopers surrounded. So, what did you think of “Evolution”? Our first Whisperers attack? Michonne’s feud with… everybody? Grade the episode below, then hit the comments.