If the Schitt’s Creek holiday special didn’t leave you feeling festive, you might have to consider the possibility that you have a lump of coal where your heart ought to be. The Daniel Levy-penned episode — a precursor to the Pop gem’s Season 5 premiere in January — was sweet, funny and a glorious reminder of how the nouveau-poor Roses have blossomed without losing their thorns. Read on, and we’ll go over the details as thoroughly as Santa might his naughty and nice lists. 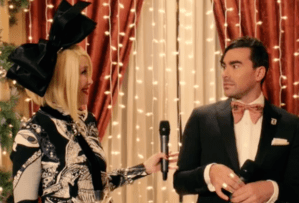 ‘WAKE ME WHEN IT’S OVER’ | The episode began with a flashback to the kind of lavish holiday party that the Roses used to throw back when they could afford to hire Paul Shaffer to play piano for Moira and David’s mother/son duet. Before ceding the stage to Aretha Franklin, Moira dismissed David to dedicate a number to Johnny, at which point everyone began chanting his name and… Yeah, he woke up from his dream. But he also woke up determined to actually celebrate the holidays for the first time since his family arrived in Schitt’s Creek. The first year they’d been there, he’d understood their sitting it out. They were in shock and depressed. And the next, “less shock and deeper depression,” chimed in Moira right on cue. Nonetheless, Johnny wanted to throw a party like in the old days — but in his and Moira’s room. Um, it’s Christmas Eve, Alexis pointed out. “Maybe people don’t want to spend it caroling in front of Mom’s wig wall.” Whether they did or they didn’t, it was happening — and, Johnny added, David was in charge of decorations; Alexis, the guest list; and Moira, the tree. 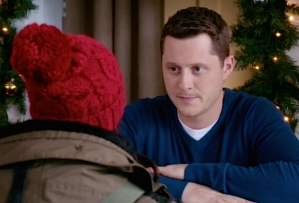 ‘I DON’T HAVE ANY TIME TO MOOD-BOARD A COLOR SCHEME!’ | At Rose Apothecary, though Patrick encouraged his boyfriend to embrace the idea of a party, David remained in full-on Grinch mode. So much so that, when Stevie stopped by to pick up two cases of wine — one for the shindig, one for her own version of “The 12 Days of Christmas” (which involved just one day and 12 bottles of wine) — she couldn’t help but ask her bestie, “What time is the ghost of Christmas past coming to visit you tonight?” For reasons that we wouldn’t learn until later (and that would make us say, “David!” in an appalled Alexis way), Johnny’s son wouldn’t even use lights and ornaments from the store to dress up the bash; instead, he took up Stevie on her offer of the decorations that Nana Budd had stored in the attic at the motel. (When we later got a glimpse of the treasure trove, it was every bit as horrifying as you’d expect: Among the Christmas decorations were Mardi Gras beads and a pumpkin. Fa-la-la-la-lame!) 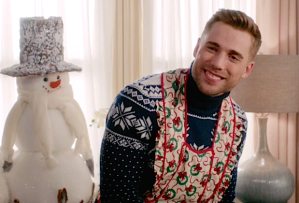 ‘OK, THAT’S JUST 72 MORE COOKIES TO MAKE, THEN’ | Meanwhile, Alexis stopped by Ted’s, only to find him in full-on Martha Stewart mode, baking cookies for both of them to present at a get-together in order to give her a leg up with his friends. And why would she need a leg up with them? she asked. They weren’t super inclined to give her another chance after the broken engagement, he admitted. Upon learning that Alexis was supposed to attend her dad’s party, Ted sweetly gave her an out. But rather than take it, she told him to double his little recipe, and they’d drop off some cookies at the motel on their way to meet his “scary, cool friends.” Elsewhere in Schitt’s Creek, Moira was as enthusiastic as a block of wood about choosing a tree from Ray’s lot. “All I can think about is the 22-foot Norwegian pine we once had, and the protesters shouting at the flatbed truck as it made its way through our front gates,” she told Johnny. “Now that was festive!” Finally, he asked his missus if, in the past year, he’d asked much of her? Since he hadn’t, he said that what he really wanted was her to be more on board with the party. 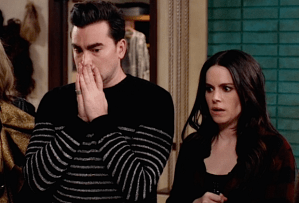 ‘THIS STUFF IS GARBAGE’ | When Johnny returned to the Rosebud with Moira and what looked like a perfectly sweet Charlie Brown Christmas tree, he might have thought that the worst was behind him. But that was before he got a look at Nana Budd’s decorations — and found out that David was so reluctant to let him use anything from the store because he was determined to sell it all to buy an espresso machine… for himself. As if it wasn’t bad enough that guests would be showing up to an undecorated room, Johnny next learned from Alexis that she hadn’t invited anybody, as she thought he wanted her to work the door. “Who’s going out crashing other people’s Christmas parties?” Johnny shouted. Arriving at the wrong place at the wrong time, Ted spilled the beans that he and Alexis weren’t staying. “I opened red” wine, said Stevie, sensing imminent disaster. “I hope that’s OK with everyone.” After Johnny released the tree branches, only to have them fall clean off, he decided that his family was right. “Why start making an effort now? It’s meatloaf night at the cafe, and if anything is screaming Christmas to me right now, it’s meatloaf!” Bless her, Stevie didn’t have the heart to tell him that meatloaf night had been yesterday. 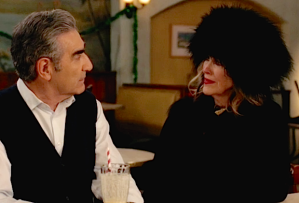 ‘ON BEHALF OF THE CHILDREN AND MYSELF, I’M SORRY’ | Over meatloaf at the cafe — Twyla had scrounged up some leftovers for Johnny — the Roses’ patriarch flashed back again to Christmas parties of yore. In this reverie, the blowout was over, and he was hoping to spend a little quality time with Moira and the kids. Only David and Alexis had already left. Don’t worry, though, Moira told her hubby. “I already gave them their checks.” Would she spend a moment with Johnny, then? “I’ve already taken my Christmas pills,” she replied, “and bitter experience has taught me I have just eight minutes to make it safely up the stairs.” Aw. Poor Johnny. When he returned to the present, Moira showed up at the cafe and heard him out as he told her what she could never remember about their glorious bashes — that they’d always ended with him alone… just like this. But since coming to Schitt’s Creek, he’d hoped that they and the kids had come together, he went on. “And it just seemed like the perfect day for a Rose family Christmas party.” Understanding at last the significance of the motel get-together, Moira apologized and, before leading Johnny home, snitched a sip of his milkshake. (“Oh, there’s no booze in that — ew!” she said, underscoring how seamlessly this show can go from making you sniffle to making you chortle.) 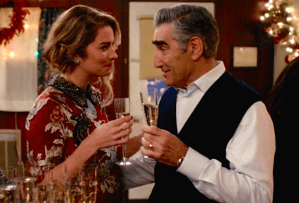 ‘IT APPEARS THERE’S BEEN A CHRISTMAS MIRACLE, JOHN’ | As Johnny and Moira approached the Rosebud, he was taken aback — it had been transformed into a magnificent winter wonderland! And his and Moira’s room looked just as spectacular! Johnny hardly even recognized his little tree anymore. Wait, was it the same one? “Theoretically,” David said. “We have spent a very long time gluing it back together.” Alexis, who’d apparently called everyone in the Schitt’s Creek phone book to attend the party, was still there with Ted, and warned her dad to be on the lookout for her beau’s friends. When Roland told Johnny that he wanted at least a week’s notice of the party next year, Johnny told him to mark his calendar now — this was going to be an annual event. Before the Jazzagals took off for their caroling at the senior center, they performed a rendition of “Silent Night” that was so lovely that it made Stevie cry. What’s that, Stevie? You’re not crying? No, she insisted to David, “it’s just, we ran out of red.”

As the episode drew to a close, Johnny revealed during the party cleanup that he’d popped in at the church’s rummage sale, so he had gifts for his whole family. Upon receiving hers, Moira thought it was a bomb. But, in fact, it was an antique tin for her wig pins. Alexis received stickers… of old men. “No,” her dad explained, “they’re stamps from all over the world.” Being a fan of money, David got a thousand yen. Useful. “It’s like being right back in Japan,” he cracked. But c’mon — the best gift of all was the smile on Johnny’s face. The party had been a huge success. And the menorah hadn’t, as he’d feared it might, caught the garlands on fire and burned down the motel. That’s the last thing they wanted, he noted. “Or is it?” asked Moira. And thus ended what is sure to go down in TV history as a new holiday classic. What did you think of the special? Grade it in the poll below, then hit the comments.