Tuesday’s Season 15 finale of The Voice promised to be a real nail-biter. Kirk Jay, heretofore the frontrunner, had had an off night Monday, and Kennedy Holmes had turned in not one, not two but three dazzling performances. They were so good, in fact, that my praise got me accused of being biased. (I think all my enthusiasm for her means is that I prefer contestants who sing like a dream and don’t stand on stage like they’ve been hit by a freeze ray.) But, considering that just last week, the 14-year-old had had to fight for the Instant Save, could she possibly have turned around enough viewers to walk away with the win? Or had Kirk’s stumble just opened the door for Chevel Shepherd or Chris Kroeze, both of whom had fine, if not mind-blowingly good, weeks but, like Kirk, appealed to the massive country vote? Before we found out, there was, of course, endless buildup. Among the performances were… 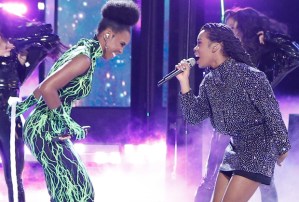 Kennedy Holmes (Team Jennifer) and Kelly Rowland, “When Love Takes Over” — Kennedy’s grade: B- | Club songs never seem to work tremendously well on The Voice, and this one was, unfortunately, no exception (even with the original vocalist on board). Kennedy and Kelly sounded a bit under-rehearsed, especially on their harmonies. But — and I know I’ll get accused of bias again — Kennedy did out-sing her famous duet partner (who I still hope will someday become a Voice coach — she was a great mentor during Season 13).

Marshmello feat. Bastille, “Happier” | Well, there’s something you don’t see in every season finale. While Dan Smith sang this catchy part alt-rock, part-DJ number, a guy in a big marshmallow head — gonna go out on a limb and guess that that was Marshmello — played what looked like an electric drum. And just like that, I had a craving for s’mores. 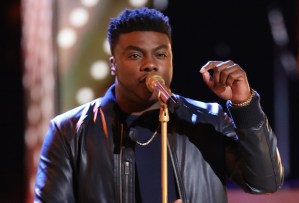 Kirk Jay (Team Blake) and Rascall Flatts, “Back to Life” — Kirk’s grade: A- | When Kirk started singing, I was relieved — this was the Kirk that I’d been a fan of all season long. Dunno what went wrong Monday, but whatever it was, he was back in fine form Tuesday. A day late to help him in the contest, sure, but at least he got to end the season on a high note, whatever happened. His vocal was strong, not at all froggy, and he had one run in there that was so complicated, it might have qualified as an obstacle course.

DeAndre Nico, MaKenzie Thomas, Kymberli Joye and Patrique Fortson, “Declaration (This Is It)” | This was one tight little supergroup. Though the Kirk Franklin number was a little meandering for my taste and involved a lot of taking turns wailing, the quartet sounded gorgeous when they sang together — those harmonies! And I couldn’t help but be delighted that DeAndre got a chance to remind Adam Levine — and the audience — of what an idiot his coach had been to cast him aside so readily.

Chris Kroeze (Team Blake) and the Doobie Brothers, “Long Train Runnin'” — Chris’ grade: B+ | Whoa, the Doobie Brothers still rock. I’d swear they even upped the tempo on their classic from the rendition that Chris had done for his Top 11 performance. Vocally, he sounded great here — raspy and rockin’ (and unlike the Doobies’ frontman, he didn’t hit a clunker of a long note). He still refused to budge on stage, but at least he looked like he was having a good time. 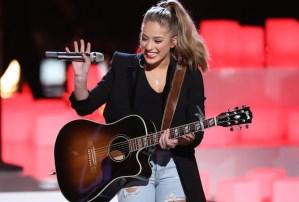 Brynn Cartelli, “Last Night’s Mascara” | What the what? The new single by Season 14’s winner, which she also wrote, is about the last thing that I expected from her after her poptastic, Julia Michaels-penned “Walk My Way.” It leaned more toward the rock side of pop-rock than the pop side — or, if you will, more toward torn-up jeans than to glittery eyeshadow. But it was catchy as hell, and Brynn had the voice to pull it off. Now I’m really curious to see what her album will sound like.

Panic! At the Disco, “Hey Look Ma, I Made It/High Hopes” | Damn, that Brendon Urie is just a charisma machine, isn’t he? His performance was so energetic and engaging that I couldn’t take my eyes off him any more than I could my ears. It also made me think I wasn’t crazy to keep dinging Chris and Chevel for their static stage presence. This was the kind of showstopping performance that makes you want to follow an act from one single to the next, from one album to the next, forever. 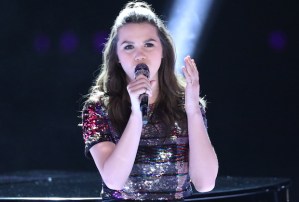 Reagan Strange, Sarah Grace and Abby Cates, “Million Reasons” | Oh, Reagan. Even with nothing on the line, she still couldn’t quite put behind her her pitch issues. At least she had a nice moment here and there, managed a smile and hit some decent big notes (with Adam watching every second, willing her to nail it, you could just tell). Abby was mainly sharp. And Sarah… well, she just kinda mopped the floor with the two of ’em, her voice was so strong and rich.

John Legend and Esperanza Spalding, “Have Yourself a Merry Little Christmas” | If the Grammy winner is half as charming as a Voice coach as he was on this jazzy duet from his holiday album, Season 16 is gonna be downright delightful. And I don’t know what Esperanza was wearing, but I need one — it looked like super-comfy, silky PJs. 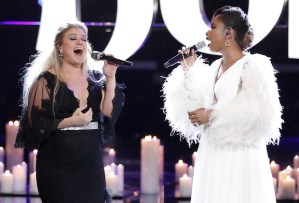 Jennifer Hudson and Kelly Clarkson, “O Holy Night” | The coaches’ duet was actually pretty restrained. I kinda expected them to blast us straight out of church and up to the heavens. I wished their harmonies had come together a little bit better, but this was mostly quite lovely. I mean, it’s JHud and Kelly. It had better be good, right?

Chevel Shepherd (Team Kelly) and Dan + Shay, “Speechless” — Chevel’s grade: A- | What happened during this performance? Chevel sounded terrific, as she usually does — though it wouldn’t have killed the sound guy to turn up the volume on her mic at times. But what was so startling to me was that she actually looked… comfortable. What’s more, there was a life and understanding in her eyes that I’d been looking for all season. So it was not only a beautiful vocal, it was a memorable performance, too.

Dierks Bentley, “Burning Man” | I feel bad always comparing the contestants to one another or, worse, to super-successful, established artists. But Dierks’ performance here was such a portrait of casual intensity that I hoped Chris was taking notes. It wasn’t like he was up there dancing around or anything — well, not much, anyway — but it seemed like head to heel he was really feeling the song. And he exuded a confidence that seared his performance into memory as much as the song itself.

Halsey, “Without Me” | Props to the Voice mentor — she didn’t just give a passionate performance, she did so while taking part in what looked like a Mia Michaels lyrical number from So You Think You Can Dance as every fog machine in the joint was turned up full blast.

When at last we got to the results, it was…

So, are you satisfied with the results? What did you think of the season overall? Vote in the polls below, then hit the comments.