Anyone watching The Voice on Tuesday could tell from DeAndre Nico’s face how he felt as his coach, Adam Levine, pleaded harder for viewers to save his ailing teammate, Reagan Strange, than him. But now, the eliminated singer has gone on the record (with 12 News Now in his hometown of Port Arthur, Tex). 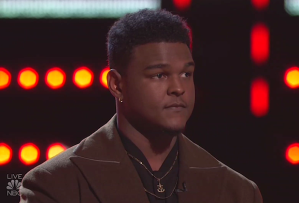 “It was just weird,” he said. “I’m not being rude. I just felt like he sold me out… and I just don’t respect it. I’m just being honest.”

Since DeAndre and Team Blake Shelton’s Dave Fenley both sang for the Instant Save, whereas Strange didn’t, he added, “We did our job, sick or not. I just got over laryngitis. When I came back, I still sang. It wasn’t none of that anxiety or none of that stuff.

In fact, higher praise for DeAndre from his coach might have made a real difference. Before host Carson Daly removed the Twitter-vote tally from the screen on Tuesday, DeAndre was only trailing Reagan by a single percentage point — and that was without any real help from Adam!

Does anyone not understand where DeAndre’s coming from? And is anyone not eager to see how Coach Levine responds to the backlash on Monday?