The 67th Miss Universe competition, which is basically the Avengers: Infinity War of the pageant world, was held in Bangkok on Sunday. And just like the Avengers, not everyone was feeling so good by the end of Fox’s three-hour broadcast.

Once again hosted by Steve Harvey — who famously crowned the wrong Miss Universe back in 2015, a mistake he managed to avoid repeating — this year’s pageant represented a record-breaking 94 different countries and territories. In fact, the hosts’s bedazzled jacket was designed with that fact in mind, featuring one jewel for every participant. 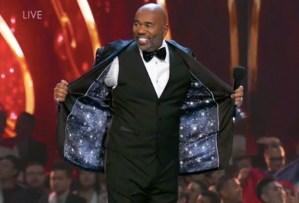 The 94 contestants were narrowed down to 20 shortly into the broadcast, with the judges selecting five women from Europe, the Americas and Africa/Asia-Pacific, respectively; the final five were “wild cards” from any continental groupings. Based on their opening statements, half of that group went on to compete in the swimsuit and evening gown rounds, before once again being halved.

That makes Catriona Gray (Miss Philippines) the new Miss Universe. Your thoughts (if any) on her victory? Drop ’em in a comment below.