The fall finale of The Conners introduces sitcom vet Katey Sagal as one of Dan’s former classmates. Could their friendship eventually blossom into something more?

TV’s erstwhile Peg Bundy plays Louise, a former high school chum of Dan and Roseanne’s who left Lanford to pursue a career in music. Now she’s back and has the hots for Becky and Darlene’s dad. Becky picks up on her amorous energy immediately, but Dan — who’s been out of the game for most of his adult life — is naive to the vibe that Louise is giving off. In fact, when Louise invites him to accompany her to an oldies concert, he thinks nothing of it. It’s not until she makes clear that she’d like to be alone with him afterwards that Dan realizes what’s going on.

At this point, Dan sits Louise down and tells her that he’s not quite ready to start dating yet. And so, the two agree to remain friends. (Here’s hoping we see more of Sagal’s Louise later this season, or in a potential Season 2; she’s fantastic with Goodman.)

Meanwhile, in this week’s B-story, Harris is escorted home by a police officer after she and her friends get caught drinking. Becky agrees to keep it a secret from Darlene, but Darlene finds out anyway when the officer shows up the following day to return Harris’ scarf, which she left in the backseat of his patrol car. Darlene yells at Harris, imploring her teenage daughter not to make the same mistakes her Aunt Becky did. Becky overhears the conversation from the laundry room and storms out. 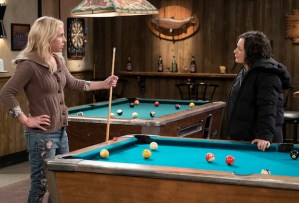 Later that night, Darlene finds Becky at a nearby pool hall and apologizes. That leads Becky to finally open up about her drinking problem. She tells Darlene that the bad habit started after Mark died. She needed Darlene more than ever, but Darlene was pregnant and David had just walked out on her, leaving her to raise a then-5-year-old Harris on her own. Becky admits that she’s doesn’t like to be needy one, while Darlene confesses that she moved back to Lanford, in part, to be closer to her big sister.

Elsewhere in the episode..

* Jackie agrees to partake in Peter’s nordic history assignment, which requires them to simulate the life of a couple living in Medieval Norway. She soon grows tired of doing all the cooking and cleaning (and hunting and gathering), and tells Peter that he has to start contributing more to their relationship.

* Becky is the first one in the family to be introduced to Darlene’s new beau Ben, and she wastes no time grilling him. “So are you serious about her, or is just about the disappointing sex?” Becky asks. Darlene then responds on her boyfriend’s behalf, suggesting, “The sex is not disappointing. He’s a middle-aged man doing the best that he can.”

What did you think of The Conners fall finale? Grade the episode via the following poll, then hit the comments with your reactions!