After this Monday’s fall finale (The CW, 9/8c), Legends of Tomorrow won’t be back until April. So the CW series is bringing A-level craziness to its final episode of 2018.

Thanks to Constantine messing with the timeline, reality is broken, and the Waverider crew find themselves living in alternate worlds — including one in which they’re puppets! Another reality features Sara, Ava and Gideon as s the Sirens of Space-Time, as seen in TVLine’s exclusive sneak peek.

“Every act, you basically see the Legends in a different form,” Maisie Richardson-Sellers, who plays Charlie, previewed during TVLine’s recent set visit. “And it’s just this mad, mad journey throughout time of coming back and thinking you’ve fixed it, [but instead] they’re in a completely different universe because one thing has changed.”

Music will also play a role in the installment, according to Caity Lotz (Sara), who teased that she’s “been to the recording studio twice this season.” As for her alt self, the actress said, “Seeing a puppet me was pretty cool.” Castmate Jes Macallan (Ava) was also a fan of the felt Sara — “I have full-blown, ready-to-hit-the-Internet, make-out pictures with her puppet,” she confessed — and couldn’t believe what the show’s writers had imagined up for the episode. “Oh God, it’s so insane. I can’t even. It’s so insane!” she exclaimed. “But it was really fun. Like, what the hell show are we doing? We get to have a sing-along!” 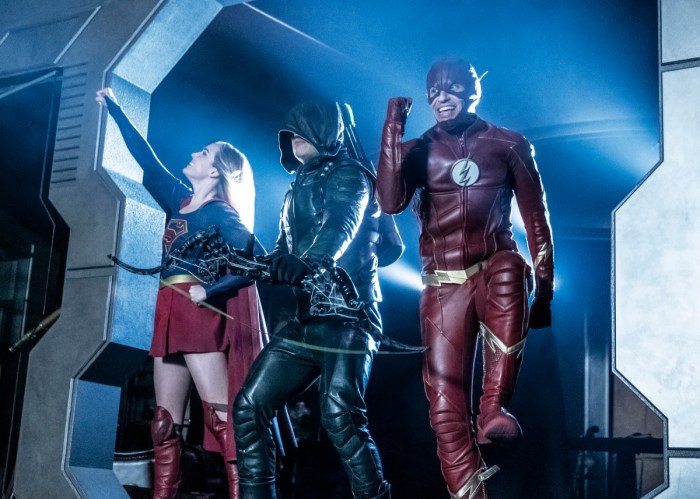 As with most of the Legends’ adventures, there’s also plenty of heart to the shenanigans, especially when it comes to newcomer Charlie feeling at home with the team. “At the end of the day, she finally really truly bonds with the Legends, and she makes a decision to stay and sacrifice her powers in order to save them,” Richardson-Sellers shared. “Seeing them in all these different ways makes her a bit fond of them. When they do come back, she’s like, ‘All right, I’ll have them around.'”

Press PLAY above to watch the exclusive video, then hit the comments with your thoughts!