If Escape at Dannemora‘s Lyle Mitchell were a fictional character, he’d be
unbelievable, too much, just a hair past plausible. Because really, how could a man paired with such an off-putting woman be so blindly loyal — and fiercely loving — even as she cusses him out, stands him up on their anniversary and makes a mockery of their marriage?

And he doesn’t even know about the hacksaws in the ground hamburger yet.

To be fair, that’s our harsh take on Lyle, who over four episodes of Showtime’s limited series has proven a very devoted husband to Joyce “Tillie” Mitchell (played by Patricia Arquette), an employee at Clinton Correctional Facility who became sexually involved with two inmates and aided in their 2015 prison break. 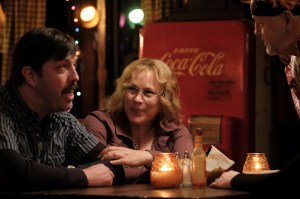 Eric Lange (Narcos, Waco), who plays Lyle, has a much gentler view of his real-life counterpart.

“I think his heart’s in the right place,” says Lange, who gained 40 pounds and donned prosthetic teeth and a wig to play the role. “People take each other for granted over time, and I think he was a little checked out. A little of it is just not wanting to see what’s going on right in front of his eyes.”

Sunday’s episode chronicled the Mitchell’s wedding anniversary, which Tillie spent getting tanked at a bar while Lyle waited, alone, for her to join him at a special restaurant. When she came home, she berated him until he was mad enough to throw a rolled-up painting of their pet pugs — crafted by one of the inmates she’d been banging — at the wall.

“I’m sure he was aware of things here and there,” Lange said of Lyle, who declined requests to meet the actor ahead of filming and who steadfastly stands by Tillie, [Spoiler alert] who’s now serving time for her role in the escape. “To me, it was kind of hoping against hope this wasn’t actually happening, you know? Watching this train crash in slow motion… How I’ve always seen it was like he was probably smarter than many people give him credit for, and he’s probably a little in denial.”

That denial will be tested in upcoming weeks, as evidence of Tillie’s wrongdoing mounts. Lyle, Lange tells us, will have to wrestle with “how much he’s going to put his foot down around what is being said about his wife, and what the truth is in his relationship with her.”

Read on for more of the Critics’ Choice Awards nominee’s thoughts on becoming Lyle from the outside-in (“he has rather unique teeth”), bonding with his on-screen pets and more.

TVLINE | Talk to me about the process of physically becoming Lyle. I have to admit: When I first saw you on screen, I didn’t recognize you.
I saw a few news clips of people trying to interview him, and I did see him walk a fair bit. I mean, a lot of what determined [how I moved] was the weight, you know? I’m usually about 175, and I was about 212 in this. I never weighed that much in my life. It affects the way your jeans hang on you. It affects the way you breathe. There’s a lumbering quality that I like about him that just sort of formed somewhat naturally kind of like an anchor that might’ve held his head down and out a little bit. It just sort of organically formed. I’m kind of an outside-in actor, so a lot of the accoutrements — the wig, the teeth, the clothes, the weight, all that stuff — inform something, and then the inside just takes over and does its thing. 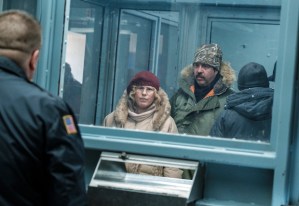 TVLINE | Did you ever worry about the series’ Lyle becoming a caricature of Tillie’s real-life husband?
Yes. Everyday that was a concern. He has rather unique teeth, and we had these teeth built that were basically identical to his. We [shot] a day with them, and Ben [Stiller, director] came to me and said, “I think we need to cut these back a little bit. They’re so much of a thing, and I don’t want people to just stare at your teeth, you’re giving a great performance.” So we did that, and then he came the next day and said, “I think we need to cut them back more.” So we did it three times, and all of that was to serve what he was trying to get across which was: We want to see the guy’s story. We don’t want to see his dental work, you know, or lack thereof… It was always about kind of taking what was unique and eccentric and special about him, and then making it palpable for a wide audience, you know?

I don’t think [Lyle is] a doormat, I think the guy’s got real opinions. There were many moments where we tried to find ways to make Lyle a bit of a know-it-all, because we wanted him to have his flaws too. He’s not a perfect angel in this whole scenario.

TVLINE | Did the dogs like you? Did you get along well with them?
I love dogs, and especially pugs. Whenever they were on set, I was on the couch, trying to get them on my lap and keep them on my lap. There’s a couple scenes in the show they completely steal the whole shot for sure.

There’s a shot, I don’t know if you’ve seen it yet, where she and I are laying in bed. I’m in my tighty-whities, and we’re both watching television, and the dogs are at our feet, basically in the front of the shot. Above their heads are our two heads. [Laughs] It’s just a beautiful family. The Mitchell family portrait.