Adam Levine had some ‘splaining to do Monday night. ’Cause as eager as we may have been to hear The Voice’s Top 8 perform, what really had us on the edge of our seats was the possibility of the coach addressing the upset that erupted in the wake of his emotional plea to vote for Reagan Strange, who had been too ill to sing for the Instant Save — over, it seemed, teammate DeAndre Nico, who had sung. #AdamSucks, cried Twitter — and we couldn’t disagree. 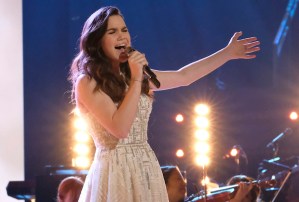 In response, the Maroon 5 frontman was shown discussing the matter in rehearsal with “his girl.” Last week “was a strange week, but it’s over now,” he told her. “DeAndre’s my boy. I love him. We talked. It’s all good.”

As if to further ensure that viewers wouldn’t hold against the 14-year-old her coach’s gaffe, before she performed Calum Scott’s “You Are the Reason” live, we were also shown a clip of her receiving an encouraging FaceTime call from her former teammate. “Do your best, man,” DeAndre advised, “and stay positive.”

Following Reagan’s performance, Adam made his first live comments of the evening but entirely ignored the elephant in the room. Instead, he simply marveled at the purity of the youngster’s voice, said that “I was so connected with you the whole time [you were singing]” and implored viewers to vote her through to next week’s Finals.

So, your reaction to the way that Adam and the show handled the situation? Are you even remotely satisfied? Hit the comments.