Every so often, Saturday Night Live has no idea what to do with a first-time host — or in the case of Aquaman‘s Jason Momoa, finds one thing that works and runs it into the ground.

Momoa was game for just about anything, including a very “extra” Christmas Carol sketch that asked him to strip down and twerk for Ebenezer Scrooge. For the most part, though, the former Game of Thrones star was asked to play a menacing meathead who broke various pieces of prop furniture and overwhelmed everyone else in the room. Suffice it to say, it was not a particularly great episode. 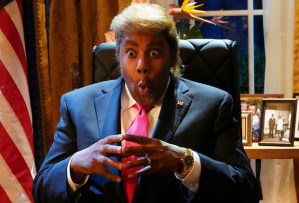 BEST: THEM TRUMPS
It’s never a good sign when the best sketch of the night doesn’t include the host. And for all we know, this Empire-inspired satire could have been filmed weeks ago, seeing as how the most timely joke was about Darius Trump’s extramarital affair with Stormy Dan— err, Cinnamon Mercedes. It’s a genuinely funny sketch, though, with Trump’s black counterpart (Kenan Thompson, doing a spot-on Terrance Howard impersonation) immediately indicted for his crimes. (Watch it here.)

BEST: WEEKEND UPDATE – TRAVEL EXPERT CARRIE KRUM
An above-average Update introduced its best new character since Heidi Gardner’s Angel: a self-proclaimed “travel expert” played by Aidy Bryant. Carrie’s travelogue revealed that she hadn’t actually been anywhere exotic — unless you count the time her family journeyed to Columbus, Ohio to visit her ponytailed uncle. Here’s hoping this adorable seventh-grade globetrotter makes it back to the Update desk before season’s end.

HONORABLE MENTION: KHAL DROGO’S GHOST DOJO
Momoa reprised his Game of Thrones role, and served as cohost of a Dothraki Public Access talk show that welcomed fellow deceased characters, including Hodor (Beck Bennett) and King Joffrey (Kate McKinnon). Funniest of all was when Kenan Thompson’s character cut to a word from their sponsors, which included the venue from Season 3’s bloodiest hour. “Remember the red wedding? Well that venue is now open for your wedding!” the pitchman exclaimed. “What are the odds of it happening twice? We’ve cleaned up almost all the blood, and we hired a new wedding planner!”

HONORABLE MENTION: FIRST IMPRESSION
Momoa was at his best in this pre-taped sketch, committing to the role of a father who was determined to find his daughter’s new boyfriend during a bizarre game of hide and seek. The reveal that Bennett’s character was stuck behind the TV wasn’t particularly funny, but we enjoyed watching Momoa turn the house upside down in pursuit of the guy.

WORST: DAY OF THE DORKS
Of the handful of sketches that had Momoa break things in place of actual jokes, this Revenge of the Nerds spoof was easily the worst. Everyone involved, from Bennett to Mikey Day, looked miserable, and the studio audience was practically mute. The closest this thing came to making me laugh was when it cut to Momoa gnawing on a garden hose, and even that was only slightly amusing.

WORST: TRUMP BROTHERS BEDTIME COLD OPEN
Robert De Niro may be a two-time Academy Award winner, but he’s terrible on SNL. He read off his cue cards as if he’d never seen them before and still managed to blow a line. Quite frankly, the show’s resident Robert Mueller looked like an amateur next to Alex Moffat, whose Eric Trump remains the funniest (and most damning) caricature that SNL currently has in its arsenal. Make of that what you will.

What were your favorite sketches this week? And what missed the mark? Watch all the highlights above, then grade Momoa’s hosting debut in our poll.