Welcome to North Carolina, Lord John Grey! Glad to have you here. Make sure to take in the vista from the ridge. Watch out for snakes in the privy. And before you head home, may we suggest stopping by the gift shop? There’s a buy-one-get-one deal on the “I Went to the New World and All I Got Was the Measles and an Emotionally Bareknuckled Brawl With the Vindictive Wife of My True Love” T-shirt.

This week’s Outlander marks the return of the second son of Viscount Melton, who brings William to see his biological father. And the fact that John does a whole lot of looking — or rather gazing — at Jamie himself? Purely coincidence, we’re sure.

Read on for the highlights of “Blood of My Blood.” 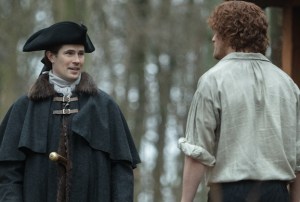 OH HEY, JOHN GREY | Jamie is sawing logs outside the house when Lord John rides up, and we get a good shot of Grey’s face as he sees Jamie. Girl, same. Fraser is very surprised to see his friend, who explains that he’s got business in Virginia and thought he’d stop by while he was in the neighborhood. “Virginia is some way north, John,” Jamie says, dubious. (It should be noted that the neck of Big Red’s is doing the equivalent of a verra deep V, as if it somehow sensed that the Notorious LJG was in the vicinity.) “He’s here with me,” Lord John continues, explaining that he wanted a word alone with Jamie before bringing young Master William — aka Jamie’s oblivious son — up to the house.

Unbeknownst to both men, Claire and Murtagh already have made William’s acquaintance. The boy’s legs are covered in leeches from wading in the stream, and he’s freaking. Claire calms him down, plucks them off and gives a biology lesson that no one asked for about leeches’ healthcare uses. Then she and Murtagh bring William up to the house. 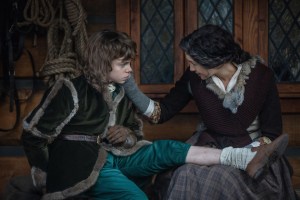 Before they arrive, John informs Jamie that 1) Isobel died recently, 2) Willie prefers to be called “William” now, and 3) it’s probably best that no one bring up the fact that Jamie is actually William’s dad, cool? Just then, the leech brigade arrives at the house, and Claire literally stops short when she sees Grey sitting at her hearth. It’s a toss-up, though, as to who’s more rankled by the Brit’s presence: Murtagh is equally displeased to see his former jailer in the Colonies. “The past is past. Lord John is a trusted friend,” Jamie whispers when he and his godfather are alone for a moment, adding that John saved Murtagh’s life at Ardsmuir.

EXIT MURTAGH | Everyone gets along well until dinner that night, when Grey casually drops that he’s pals with Gov. Tryon — and that Tryon is building a palace. “A rather untimely investment,” Claire says, not doing much to hide the fact that she 100 percent sides with the hot dish of simmering Murtagh seated to her right. It gets ugly — John calls the Regulators “unreasonable and dangerous,” and then Murtagh says that he’s actually describing the governor, and then eventually Murtagh abruptly stands and leaves. “A pleasant evening, indeed,” Grey says, standing to bid the Frasers’ guest adieu. Murtagh makes the most Scottish of noises, something akin to “mmmmmphdfmmmmghhmmmm” and departs. Outside, Murtagh can’t figure out why Jamie cares so much about John being there for William. And then? “He’s yours, isn’t he?” the older man asks. Jamie swears him to secrecy, saying that William will lose his entire inheritance if anyone finds out he’s a bastard. “Don’t worry about me keeping your secrets,” Murtagh says, though he doesna sound happy about it. “I’ve kept them, each and every one.”

After dinner, after witnessing Jamie with the horses, William puts together that he’s actually “Mac” the groomsman from Helwater. “Do you still have the wooden snake I carved for you?” Jamie asks. “I’m too old for toys, sir,” the boy responds, and if we had one of those Grinch-cams on Jamie’s heart, I’m sure we’d see it shrink two sizes from that comment alone.

Jamie and John prepare to sit down for a game of chess, but first, Jamie has drop his voice a few octaves and tell Claire that he’s been dreaming of a moment alone with her for weeks. (Young Ian, by the way, is out on a hunting trip with the Cherokee.) The Frasers share a lingering kiss outside, but then she reminds him that he’s got host duties to attend to. “But as soon as our guests leave, I’ll be expecting your full attention,” she purrs. GUYS. Not that all of this extended foreplay isn’t sweet and sexy, but remember how you used to go at it on hillsides and near campfires and while Murtagh was on the other side of the damn bedroom door? You can do quick and dirty, is all I’m saying. If there’s not time to lay out the whole feast, so to speak, there’s probably a moment for quick snack, no?

Anyway, back inside, Jamie and John drink and play chess and generally enjoy each other’s company. “Do you feel yourself content?” JLG asks his friend. “I have all that a man could want,” Jamie replies. 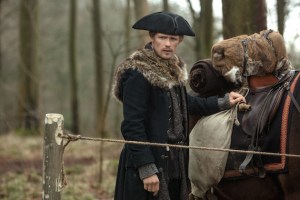 FISHING FOUL | The next morning, Lord John is looking rather, well, gray. And when he nearly falls over as he says goodbye to Claire, it’s clear that he’s sick. She quickly ascertains that he’s likely got measles, and though she and Jamie are both immune, William will have to stay away for at least six days.

“I’ll take the lad for a tour,” Jamie assures John. But William doesn’t want to go, and Jamie has to bodily remove him from the premises like an overstimulated toddler in the Dollar Aisle at Target. Or, really, me in the Dollar Aisle at Target. (Side note: I laughed out loud at Sam Heughan’s delivery of “Don’t kick. It’s ill-mannered” as William hammered his heels at his shins.)

When his mood improves, William warms to both Jamie and the land, which he says is the most beautiful he’s ever seen. Jamie teaches the boy how to catch fish with his hands and how to dress a stag he’s shot, and things seem to be going well until William gets very sad at dinner one night. Jamie realizes that he’s afraid John is going to die, but he’s incapable of comforting him. 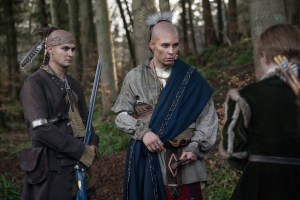 In the morning, Jamie wakes up to find William lifting a fish from a Cherokee trap — and the Cherokee who also see him do it are not best pleased. When one of the Native Americans says that the boy must pay with blood, Jamie yells out the truth, saying, “The boy is my son! His blood is my blood” and asking them to hurt him, instead. But William can’t let Jamie take the blame, and steps up at the last minute for his punishment. The Cherokee man meting out justice merely scratches his blade against William’s hand; it bleeds, but not much. As the Cherokee turn and leave, William slowly falls into Jamie, hugging him. Jamie credits the man’s mercy to William’s bravery. (“And idiocy,” I add.)

THE SMACKDOWN | Back at the house, when an ailing John mentions that he and Isobel were more like siblings than husband and wife, Claire asks, “Was she satisfied at that? To be your sister?” Claire, I know he’s sweating up your linens and all, but that’s just not hospitable. John shoots back that he was an adequate husband for her, “in all ways,” and things get even more bristly between the two of them as his illness progresses

“You’re envious of the time Jamie and I shared together, and with William,” he says, speaking the truth. She mentions that she and Jamie have an adult daughter, which she knows will wound him a bit. He says he came so that Jamie could see William. Or, she remarks, “to allow you to see Jamie.” John is about to cry as he calls her “devastatingly straightforward.” And when she says she can’t help it, she was born that way, he merely mutters, “So was I” as a tear rolls down his cheek.

On the worst day, John is shirtless and speckled like a egg, his eyes glassy and his cache of effs to give completely used up. He confesses that he felt nothing when Isobel died, and that he’d come to Virginia “to see whether I could still feel.” Breathing like he’s on the last leg of a marathon, he wheezes out, “Oh it’s hard. It’s hard watching you with him.” And when Claire asks why he’s torturing himself, because he knows he could never have him, John’s not too far gone to land the perfect arrow: “I could have had him.” BAM. Claire tells him to stop talking, and while you guys know I love her more than a grown woman probably should love a fictional character, even I’ve got to admit: Game, set, measles match to Lord John!

THE RING THING | The next morning, John is doing much better, and he apologizes for his “lack of discretion.” Oh you two, there’s stuff in your future that’ll make last night look like Sesame Street in comparison, but we’ll hold off on that for now. They bond about being terrible partners to otherwise good people, and then she asks if he still has feelings for Jamie. “I do,” he answers. “Yes. God help me.”

Just then, Jamie and William return, and both are very happy to see Grey much improved. When the Grey men leave a day or so later, Claire and Jamie are a little wrung out, touching foreheads and closing their eyes as their guests make their way off the ridge.

The upside of being alone? Jamie can give Claire a leisurely bath in the middle of the cabin. And that’s where he gives her the ring he had Murtagh make, in the thistle pattern we know from the book, which features an inscription that translates to “Give me a thousand kisses.” She stands up, still dripping from the bath, and he carries her to the bed, where they get to work on reaching that smoochy total.