Who/what is Legends of Tomorrow‘s latest Big Bad? Which Blindspot face-off will finally happen? Will The Flash reveal Future Iris? Which NCIS team member is about to get rattled? Read on for answers to those questions plus teases from other shows.

Any scoop on the midseason finale of Blindspot? –Barbara
Yes, and just in the nick of time. “It’s a twist-filled, international affair,” showrunner Martin Gero says of this Friday’s pre-break outing. “The whole first half of the season has been leading up to this episode. Remi will try and break Shepherd out of CIA custody. Reade will try and track down Zapata in Mexico and Rich, and Patterson…well, you’ll see.”

Anything to tease for the back half of Blindspot Season 4? Any scoop on Zapata and Reade? —Tony
“The first half really feels like a warm-up to the back half of Season 4,” answers show boss Martin Gero. “The show is huge, with jaunts to Mexico, Peru and somewhere else secret. Zapata and Reade will finally come face to face! I can’t really give too much away, but it’s explosive. Their relationship this season is filled with so many twists and some big emotional swings. I can’t wait for you to see the episodes.” 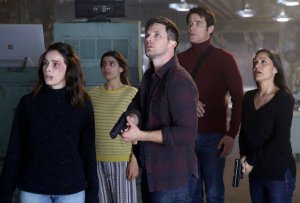 Does the Timeless finale pick up right were we left off? —Amanda
The two-hour series final (airing Dec. 20) will start up right where it left off, because “we certainly needed to answer the question of, ‘How are future Wyatt and future Lucy here?'” showrunner Arika Lisanne Mittman says. “And so that question will be answered within the first five minutes.” Another big mystery will also be unraveled: “The journal, which has been largely absent from Season 2, will come back into play, we promise,” Mittman reveals.

Will one of the Legends of Tomorrow be the Big Bad this season? — Derrick
Here’s what I can tell you. Or, more accurately, what Maisie Richardson-Sellers can tell you. “[Season 4’s Big Bad] is completely unexpected. Everything you would assume, it’s the opposite. And I think that’s fantastic,” Charlie’s portrayer teases. “This is the first year where we’ve shot almost half a [season], and only now is the Big Bad beginning to come in.” OK, but who/what is it…? “It’s someone or multiple people who have emotional connections with us and, therefore, makes defeating the Big Bad even more difficult and complex,” she said. ” I think a lot of people are going to be heartbroken in the process of doing it.”

Will The Flash give us any more glimpses of Nora’s life in the future, and will we see future versions of Iris and everyone else? –Mariam
The good news: “Yes, we will see Iris in the future,” Candice Patton shared during our visit to the set, when Episode 11 was being filmed. However, “We haven’t shot it [yet].” 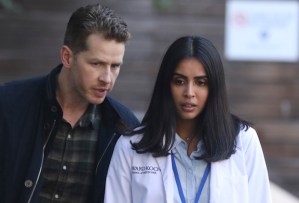 Are Manifest‘s Ben and Saanvi going to get closer? –Erin
“Yes,” showrunner Jeff Rake answered when I hand-delivered your Q. “But not necessarily the way you are thinking.”

Do you have any inside scoop about Gotham, particularly on Bruce’s storyline? —Louisa
Having seen the first episodes of the final season, which picks up three months after the bombings that cordoned Gotham off from the rest of the world, I have to say that David Mazouz really carries himself as the young man who will soon become the Dark Knight. He also may break your heart as Bruce takes time out from battling baddies to check in on a critically wounded and despondent Selina. 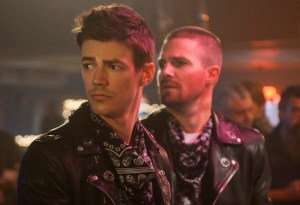 UPDATE! Will the Arrowverse “Elseworlds” crossover pick up on any of the storylines from any of the shows, or is it just its own event? –Stephanie
After viewing Parts 1 and 2, we can reveal that the special event, especially Monday’s Arrow hour, will address some ongoing story arcs such as Oliver and Felicity’s “fraught” relationship (her words!) following his release from prison. Supergirl also chats with her cousin Clark about her recent troubles at the DEO. But don’t expect any follow-up to The Flash‘s recent reveal about Nora, who is absent during the crossover.

UPDATE! What can you tease about Caitlin’s participation on this year’s Arrowverse crossover? –Carolina
Caitlin and Killer Frost both play an active role, with the former sharing a heart-to-heart with Felicity.

Anything on Good Girls? About Rio and Beth? — Ana
Here’s a small sample of what the NBC drama’s writers shared with the Inside Line, as we all await a return date: “In the first 10 minutes of Season 2, the standoff between Beth and Rio will be resolved. And all we will say is, the gun is definitely loaded.”

Do you have any scoop on NCIS: New Orleans? Anything for Sebastian, Tammy, Wade, Triple P or of course my favorite, Lasalle? —Hollie
In an early February episode, LeVar Burton will guest-star as Rufus Nero, a Naval Intelligence agent who will partner with Pride’s team when a rare and deadly virus is stolen. In doing so, Rufus will have to win the trust of the team — especially Wade, who he absolutely infuriates during their first meeting. (Seriously, we have never seen someone rattle Wade like this before.) 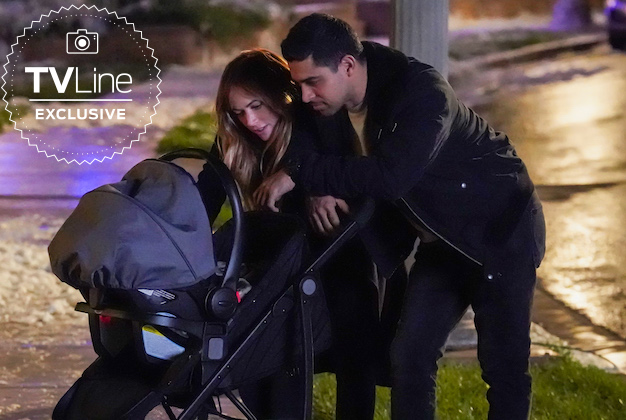 Any teasers of what will be happening during NCIS: LA‘s mid-season finale (airing Sunday, Dec. 16)? –Tony
Here’s one thing that will happen: Callen’s relationship with Anna will face a pivotal test — and he will be pulled from a case because of it. (And just so I can complete the rare NCIS hat trick, here’s an exclusive photo of the mothership’s Bishop, Torres and the Christmas baby.)

Do you know when HBO’s Succession will return? –M
I reckon the Top 10 Dramas of 2018 member will be another summertime run, seeing as production on Season 2 doesn’t start up until early 2019. 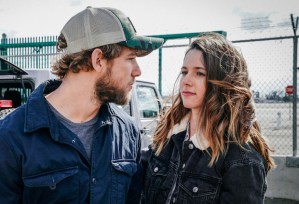 Any chance of any SEAL Team scoop? –Beth
I am here to admit that I guesstimated incorrectly. Although Alona Tal landed a lead role in ABC’s NYPD Blue revival, I am hearing that we will in fact see Stella aka Clay’s jilter again.

Can you give me any scoop on Arrow episodes to come? –Sheena
Back when Oliver’s prison stint was just beginning and his future as Green Arrow seemed bleak, I asked showrunner Beth Schwartz if there was any hope of ever revisiting the Villain of the Week format. “Definitely,” she said. “Every season we talk about Villains of the Week and trying to get them on, because it is something that started the show. You’ll definitely see some of those this season.”

Real questions get real answers! If you need the Inside Line on a favorite show, email InsideLine@tvline.com! (With reporting by Vlada Gelman)