The Riverdale gang split up this week for three mini stories: Archie made hay while the sun shined, Veronica played her cards right… and Betty didn’t have a prayer.

First, Archie and Jughead are still on the road when they stop at a humble farmhouse. A little girl there pulls a shotgun on them, joined by her big sis Laurie Lake — hi, Riley Keough! — and the boys lie and say they’re Cal and Biff from Centerville, just looking for a place to spend the night. Laurie is clearly wary, but she offers them a warm stew dinner, explaining that her dad and brother are away “on a job down the river.” She also seems to take a quick liking to Archie; when the two of them lock eyes, Jughead groans, “Seriously?” 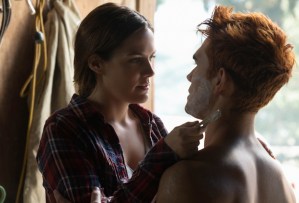 The next day, while Archie hauls bales of hay (shirtless, of course), Jughead walks into town and finds a bunch of abandoned buildings marked with those Gargoyle King symbols, along with some teens playing G&G. They’re enjoying some Fizzle Rocks — remember that drug young Hiram had in the flashback episode? — and explain that all the men in town are busy building a prison-slash-Fizzle Rocks lab for “the Man in Black.” Back in the barn, Laurie thanks Archie for all his hay-hauling by giving him a shave… and straddling and kissing him. Archie doesn’t not kiss back, but he does stop her (eventually), telling her he has a girl back home (eventually). He also tells her his real name is Archie, and she seems cool with all of that… until she bashes him in the head with a frying pan.

Jughead spots Hiram — yep, he’s “the Man in Black” — driving up and talking with Laurie, and returns to the farm to find Archie tied up. He frees his pal and is ready to run, but Archie wants to stay and fight, grabbing a pair of garden shears: “Just let me end this nightmare once and for all!” Jughead wisely talks his buddy out of murdering his girlfriend’s dad, pointing out that Veronica would never forgive him. We learn that Laurie sold out Archie to get her dad and brother back, who are working off a debt to Hiram, but when they get to the barn, Archie and Jughead are already gone… and heading to see Jughead’s mom in Toledo. 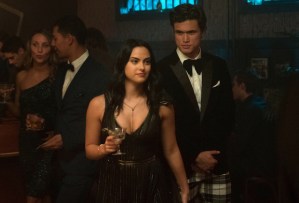 Back in Riverdale, Veronica is coping with Archie’s absence by moving out of her parents’ penthouse apartment and crashing in a booth at her speakeasy. But even that might be gone soon: She confesses to Reggie that business is slow, and they can’t make a profit just selling mocktails to teens. So she reaches out to that rich pal of hers, Elio, and offers him a healthy cut to set up a casino inside the speakeasy. She has to take out a second mortgage on Pop’s to finance the switch, though, and Hiram warns her that Elio and his family are a bunch of crooks who are likely just out to “rob you blind.” (And he should know!)

On the speakeasy’s casino night, business is booming, but Reggie warns Veronica that Elio hasn’t lost a hand of blackjack all night. Ronnie suspects he’s cheating, and asks him to cash out, but he knows that with his cut of the profits, “either way, I win.” So she challenges him to one hand of blackjack, winner-take-all, offering up the deed to Pop’s. He gets a 20, and she gets 19… but she hits again and gets a 2, giving her 21 and the win. An unlikely win, to be sure… and she later confesses to Reggie that she and Hiram conspired to bring in a friendly dealer to trick Elio into gambling his winnings away. So maybe things between Veronica and her dad aren’t beyond repair. 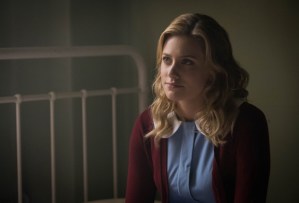 Finally, we catch up with Betty as she settles in at the Sisters of Quiet Mercy. She tells the nuns what they want to hear, and when she’s given a “treat” of Fizzle Rocks — every other girl in the place is drugged out on them — she dumps them in the trash. She’s stuck with looney-tunes Ethel as her roommate, though, who’s made a gooey love collage dedicated to the Gargoyle King and still thinks she and Jughead really connected during that kiss in the bunker. (Sure, OK.) Oh, and she says Sister Woodhouse and the nuns take misbehaving girls to see the Gargoyle King in his chamber… which gets Betty’s wheels turning.

After she spies Claudius Blossom driving a maple syrup truck up to the convent — and Hiram chatting with Sister Woodhouse — she starts a fight with Ethel and fakes a seizure to get taken to the infirmary, where all the files are kept. Inside her file, she sees that “H.L.” has said to increase her dosage. So Hiram is using the girls there as guinea pigs for his Fizzle Rocks empire? When Betty tries to escape using the same route as Cheryl did, though, she gets caught, and Sister Woodhouse forces Fizzle Rocks down her throat. A dazed Betty is led into the Gargoyle King’s chamber, and while we don’t get to see what she sees, her bloodcurdling scream tells us it’s not good. Now Betty is catatonic… and a dedicated disciple of the King.

* Sheriff Minetta went missing this week, and ended up dead — decapitated, actually, with his hands cut off. Is that just Hiram covering his tracks after Veronica discovered that footage of Minetta tampering with witnesses? Or something more sinister… and supernatural?

* I was surprised to hear Archie tell Laurie that he and Veronica were “not together anymore.” I know he’s skipped town… but maybe that was more of an actual breakup than we thought? (His lips sure said so.)

* Speaking of shaky relationships: Shouldn’t Jughead be more worried that he can’t get in contact with Betty?

* Are Fizzle Rocks to Jingle Jangle what crack cocaine is to powdered cocaine? Just trying to keep all of this straight.

* Best exchange of the week came when Ethel taunted Betty that she and Jughead were destined to be together: “We’re gonna be a ‘ship.” Betty’s befuddled response: “Ethelhead?”