Chicago Fire‘s fall finale turned up the heat — in more ways than one. For starters, Casey and Naomi got it on, but afterward, the firefighter opened his bedroom door to reveal a giant blaze in his home!

While Casey’s relationship with Naomi was seemingly progressing — more on that shortly — Severide and Stella’s was falling apart. Stella saw past her boyfriend’s so-called jealousy of Tyler and urged him to come out with whatever was really bothering him. But when he remained silent, she instead met up with Tyler.

Below, showrunner Derek Haas talks about that fiery cliffhanger, Casey’s romantic future, and the rocky road ahead for “Stellaride” when the NBC drama returns on Jan. 9.

TVLINE | When you said the fans are going to be angry at you for the ending of this episode, were you referring to the fire cliffhanger, Casey and Naomi hooking up, or Stella and Severide being on the verge of breaking up?
(D), all of the above! Those last six or seven minutes, I was like, “Oh man, people are going to be mad about Casey hooking up with Naomi. Then they’re going to be really mad about Severide and Stella.” And then I was like, “Oh, and then we’ll throw one more thing at them 30 seconds later. That apartment we’ve known for five years is engulfed in flames.”

TVLINE | Just to confirm, the fire that was started in Casey’s apartment, that was a threat from the company suing Naomi?
That’s part of the mystery that we’re going to unravel when we get back in January, but the clues are there with the guy who was watching them out in Indiana, then was following them out of the diner. I would be highly suspicious of the Gramberg Trailer Company.

TVLINE | Something tells me a firefighter captain is going to figure out a way out of this fire.
[Laughs] Yeah, they messed with the wrong guy, for sure. But we’ve never seen Casey fight a fire in his pajamas before. So you’re going to get something new to come back to.

TVLINE | And in his own home!
Yeah, in his own home, exactly. And we play with the idea [of] how many calls has Casey responded to where there are people down inside the house that they loved and treasured and all those kinds of things, and here is a guy who is having to be on the other side of it.

TVLINE | You’ve said that this thing with Casey and Naomi is more of a fling. So how serious is he about her? And are there other women that are going to catch his eye when you return in January?
This is more of like a shorter “relationship” for him, and he’s going to be freshly single for the second half of the season. He’s not looking to get back into a serious thing. 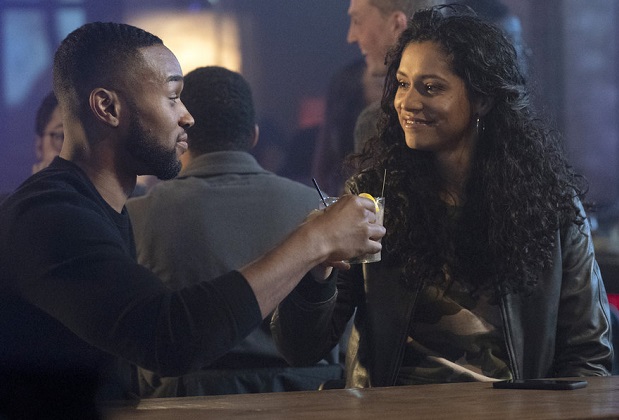 TVLINE | Where do Severide and Stella stand? Are they broken up? Are they figuring it out?
They are on the ropes, I will say.

TVLINE | And is Tyler going to continue to be an issue and a threat?
Yeah. He’s not good for this relationship. He’s got his own feelings that he’s dealing with, and Severide thinks he’s got more on his mind than [friendship] with Stella, and Stella thinks Severide’s being a little too jealous. So we’ll see that play out more.

TVLINE | We also got a little deepening of the relationship between Cruz and Chloe in this episode. Are we going to continue to see that romance evolve? Is she going to be around a bit more?
Yeah. I love them. I love this actress [Kristen Gutoskie] that’s playing Chloe. She’s fantastic, and it’s just so sweet with Cruz and [her]. I’m thrilled with that. And then we got to see [Otis’ girlfriend] Lily again, and I think the idea of a Lily/Cruz/Otis/Chloe double date would be fun. So I don’t think those are going anywhere for a while.

Fire fans, what did you think of the fall finale? Grade it via the poll below, then hit the comments!