Outlander‘s Jamie grew up with his godfather always protecting his back. But now that Murtagh has resurfaced on the Starz series, star Sam Heughan says, the two men may find themselves fighting against each other rather than side by side.

“The scene where we meet him, it’s just filled with so much,” Heughan tells TVLine, reminiscing about the scene in Sunday’s episode where Jamie unexpectedly ran into his long-lost relative in a North Carolina blacksmith’s shop. “There’s always been a great bond between Jamie and Murtagh. It’s kind of been unsaid, but he really is his godfather, his guide. For Jamie, it’s just everything to have him back in his life.”

But it’s been a while since the two Scots have been in contact, Heughan points out, and it’s not a given that they’ll be able to recreate their close relationship — especially with the Regulator issue between them.

“Jamie’s grown up, and he’s certainly his own man now,” the actor explains. “To have this cantankerous old man in his life is also going to cause some trouble. They’re on either sides of the Regulators. It really is setting up other seasons now, with the war that’s coming.”

He adds: “I think you can probably guess what’s going to happen.” [Editor’s note: At this point in the interview, it should be noted, Heughan’s co-star Caitriona Balfe makes a point of saying that the newly resurfaced (and aged) Murtagh is “such a silver fox.” We thought you might like to know.]

Executive producer Matthew B. Roberts teases that the Jamie-Murtagh story sometimes will be “at cross-purposes, which is good, even though they have this bond with each other.” 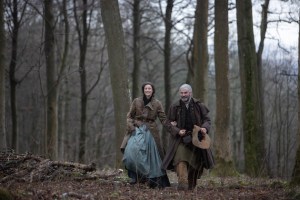 And if you liked that arm-in-arm scene at the end of the episode, the EP adds, there’s more along those lines coming up.

“I think the other reason why people like Murtagh so much is that he has a special bond with Claire, as well,” he notes. “And you’ll see that going forward.”