Ask the stars of Arrow, The Flash and Supergirl about this year’s “Elseworlds” crossover event, and one word comes up again and again: fun.

“It was the most fun that I’ve had maybe ever throughout the course of doing the show,” Arrow‘s leading man, Stephen Amell, said during TVLine’s recent set visits.

The Girl of Steel, Melissa Benoist, echoed the sentiment: “This one was so fun, in particular, because it really was ‘the triad,’ so to speak.” She is, of course, referring to the trio of superfriends at the center of the event, which finds Oliver Queen’s Green Arrow and Barry Allen’s The Flash caught up in a body swap.

“Kara plays a really fun role in this dilemma that Barry and Oliver find themselves in,” Benoist previewed. “She’s the only one that really recognizes them for who they are in this Freaky Friday situation. And it’s really comedic, the whole thing.”

Selling the wacky switcheroo was important for Amell, who “had a discussion very early on [with Flash star Grant Gustin] that if this was going to work, that we really had to go for it,” the actor shared. “Because he has my learned abilities, and I have his superpowers, there are elements of each other’s personality that each of us have to embrace… So every once in a while, I’m channeling my inner Barry Allen, and I’m looking at Grant after the take, going [meekly], ‘Is it too much?’ But no, we had a blast.”

Read on for scoop on Oliver and Barry’s “new” spouses, the group’s trip to Smallville and Batwoman’s surprising connection with Supergirl. 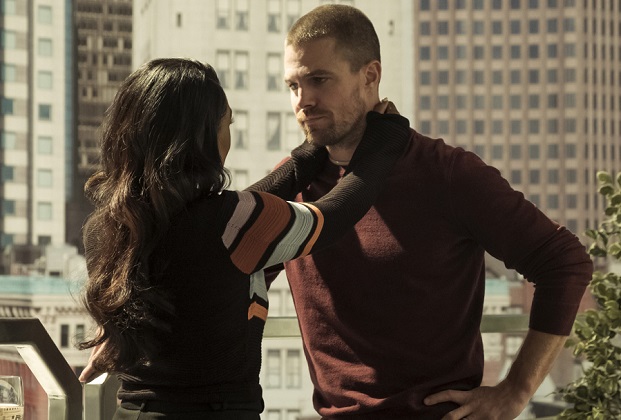 WIFE SWAP | As glimpsed in promos, Oliver wakes up to his new life as The Flash and is greeted by a kiss from Iris West-Allen. And though Barry in turn is married to Felicity, “we don’t explore that as much as the Barry/Iris [dynamic],” Gustin said. Still, viewers will “get the comedy of Barry” — who comes-to while training with Diggle — “reacting to this new world and this new reality.” Ever the supportive wife, Iris is “really the one that believes [Barry] in terms of him saying that’s Oliver Queen,” her portrayer Candice Patton shared. “Barry comes over as the Green Arrow and convinces Iris that he’s really Barry Allen, and they have that connection. She’s kind of the one that brings that back to the team.”

HOME SWEET SMALLVILLE | Barry and Oliver’s quest to undo their situation will take them to Supergirl’s Earth-38, where viewers will finally meet Lois Lane (Grimm‘s Elizabeth Tulloch). Kara has “known her for a while in our story,” Benoist noted. “But playing scenes with her for the first time, the way they’ve written her is perfect. I think people and fans, especially of that mythology, will really love it. And Bitsie Tulloch just nailed it.” Plus, filming on the iconic Smallville farm “was really, really exciting. All of us were beside ourselves,” said Benoist. “To pay tribute to that show felt good. When you’re there, even though it’s in Canada, it feels like pure Americana. … There are some really, really lovely, heartwarming scenes on the Kent farm.” 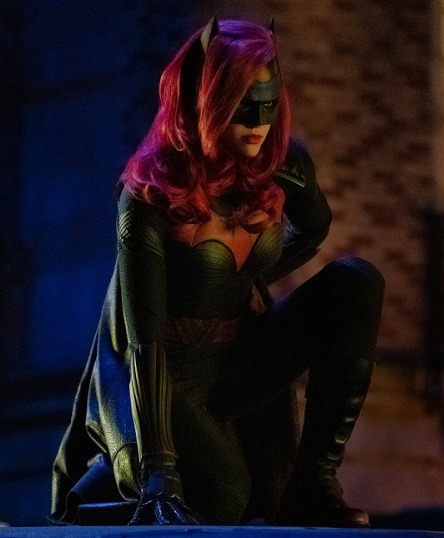 FEMALE POWER | The Arrow portion of the crossover takes the trio of heroes to Gotham City, where they meet Kate Kane aka Batwoman (Orange Is the New Black‘s Ruby Rose), who has a surprising amount in common with Supergirl. “Their scenes are really nice because of their similarities,” Benoist described. “Kate Kane is Bruce Wayne’s cousin and all these things, so they really relate on a lot of levels that I don’t think Kara’s found yet in another female superhero. There’s a really deep understanding from the get-go between the two of them.”