Claire Foy already has an Emmy for her portrayal of Queen Elizabeth II. Will she earn a second statue for her Saturday Night Live hosting debut?

The English actress proved herself a rather excellent host as she presided over the third-to-last episode of 2018. She even got the chance to spoof her award-winning role in a good-natured Netflix ribbing that teased a Crown prequel series.

Following an understated monologue, Foy delivered some serious laughs as both a soldier’s wife and a mafioso mistress-turned-morning show host. But the episode itself was rather uneven, with nearly every decent sketch followed by one best forgotten.

Lo and behold, my picks for best and worst sketches… 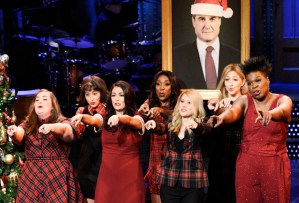 BEST: ALL I WANT FOR CHRISTMAS
All I want for Christmas… is this singalong to be uploaded to YouTube (which I can only assume has been prohibited by Mariah Carey or her label). Cecily Strong, Kate McKinnon, Aidy Bryant and Leslie Jones led this tuneful plea aimed at Special Counsel Robert Mueller, in which they kindly requested that he deliver just a “friggin’ ounce of cheer” this holiday season and disclose his findings on President Trump. And while I get why the show chose to open with Alec Baldwin’s (highly anticipated?) return as POTUS, this would have been a far more satisfying way to go.

BEST: THE WAR IN WORDS
Back in 2016, SNL writer Mikey Day made his on-screen debut as a featured player on NBC’s Maya & Marty (remember Maya & Marty?!), starring in an earlier version of this very sketch. It was one of the funniest bits to come out of that short-lived variety program, and I was pleasantly surprised to see it find new life on SNL. It wouldn’t work without Day becoming increasingly apoplectic, but it was Foy as his dimwitted wife who had me howling hardest.

BEST: GOOD MORNING GOOMAH
Foy and McKinnon’s accents were spot-on in this Staten Island morning-show sketch, which felt like the Fifth Borough’s answer to “Bronx Beat.” The Crown star was particularly great as mistress Sandy Dentista, whose response to mafioso boyfriend Tony (Pete Davidson) lashing out over warm orange juice (“Why you so porrrrfect?”) got one of the biggest laughs of the night. 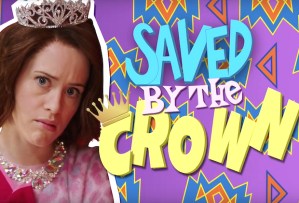 HONORABLE MENTION: NETFLIX COMMERCIAL
Yes, Netflix makes too many shows. And yes, I’d watch every episode of Leslie Jones In a Van Getting Batteries. But this lampooning of the streaming service’s alleged efforts to “achieve the singularity” was just OK. A little more attention to detail would have helped, especially in the case of gritty Family Matters reboot Officer Winslow, during which Carl, not Steve Urkel, uttered the signature catchphrase, “Did I do that?”

WORST: CHARLIE’S GRANDPARENTS
This Charlie and the Chocolate Factory spoof was a long, drawn-out, octogenarian sex joke, capped by an unfortunate dust gag. (And you thought that Johnny Depp movie was bad!)

WORST: JULES ON THE ECONOMY
Here’s one Beck Bennett character I never need to see again. This hipster and his “unique perspective on the economy” didn’t annoy me quite as much as, say, Kyle Mooney’s Bruce Chandling (ugh!), but he came awfully close.

What were your favorite sketches this week? And what missed the mark? Watch all the highlights above, then grade Foy’s hosting debut in our poll.