If you like your Doctor Who episodes to have a baddie that deserves its fate and a baddie that just wants to be part of our world, this week’s episode, “It Takes You Away” written by Ed Hime, was for you. It also brought us a moment between Graham and Ryan that we’ve been waiting for since the season premiere.

‘THERE ARE WORSE THINGS OUT THERE THAN PEOPLE’ | The Doctor could tell from eating the soil that the TARDIS had taken them to a remote area of Norway where, sadly, we were 193 years too early to witness the “utter bloodbath” of the Woolly Rebellion, which will redefine the sheep-human relationship in 2211. Team TARDIS saw a boarded-up cottage with a chimney and no smoke in the distance and got curious. Ryan and Graham went upstairs, heard a thud from inside a wardrobe, and decided to open it before yelling for the Doctor to join them. That seemed like a bad idea, but luckily it was only a blind girl named Hanne, who was scared of “the thing” that had gotten into her house and taken her dad, Erik. After she ate the cheese and pickle sandwich Graham takes with him every time he leaves the TARDIS now, Hanne asked them to help her find her dad.

It was a chance to bring up Ryan’s daddy issues, since he immediately asked Hanne how she knew her dad hadn’t just packed up and left her four days ago when she woke to find him gone. (We thought Ryan was cruel; he was kinda right in the end.) Ryan assumed Hanne was making up a story about “the thing” coming every day at the same time to hunt, which meant they needed to all get inside. For some reason, they separated: Yaz and Ryan checked out the shed, where they found a row of dead birds (cue Ryan’s scream) and a lot of bear traps. When they heard a horrifying noise coming from the forest, Ryan became a believer.

‘WHEN IS A MIRROR NOT A MIRROR?’ | While the Doctor tried to calm Hanne, Graham took lookout by the window in Erik’s bedroom. A noise drew him to a mirror, where he no longer saw his reflection. Ditto Ryan, who arrived in time to deadpan, “We’d know if we were vampires, right?” Usually it’s Ryan who touches things before thinking, but this time it was Graham. The Doctor used her sonic to “lock it, mid-whatever it was doing.” Yes, we know she loves her sonic. She uses it constantly (which is presumably not just a sly comment on how women are more open to asking for directions/information than men). She stuck her head through the mirror, which was a portal. But to where? Ryan was tasked with staying behind to protect Hanne, and the Doctor, Yaz and Graham traveled through to a dark, rocky maze of tunnels.

They quickly stumbled on to a veiny-looking being named Ribbons of the Seven Stomachs. He had a large red balloon-like lantern (that made you feel like you were watching It). He was willing to trade it and information on the man he’d seen pass through — “No horns, one mouth, so ugly, like you, but such nice big boots” — in exchange for the Doctor’s shiny sonic. He’d warned them to be quiet, and that’s because noise attracts “flesh moths,” which rip the meat off your bones. Charming. He threw a dead rat to distract it (Erik must have been using those dead birds), and cut the string the Doctor had attached to herself as a lifeline to find their way back through the tunnels.

Ribbons eventually pulled a knife on Graham — couldn’t the Doc have used her sonic to search for a second weapon on him? — and was forcing the Doc to renegotiate the terms of him being their guide when the flesh moths returned. Ribbons told the Doctor they were in an anti-zone. The universe makes it wherever the fabric of space time is threatened — a protective buffer zone to keep threats at bay. A swarm of flesh moths descended on them, and the Doctor knew that they should stay still if Ribbons was trying to get them to run. He’d been tackled to the ground by Graham when he tried to make off with the sonic. Now it was his precious. He couldn’t himself and moved again to grab it. The mouths devoured him, and Team TARDIS escaped through another portal… which led to a room that looked similar to Erik’s. 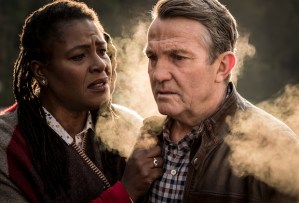 ‘I’M GENUINELY TERRIFIED’ | Erik was in the kitchen of Cottage #2 — with two plates. Hannah’s mother, Trine, was alive here even though she remembered dying. Trine couldn’t travel through the mirror, so Erik had come to be with her for a while. He created the monster noises to keep his daughter too terrified to venture into the mountains while he was gone. An appalled Graham told Erik to get his priorities straight, his daughter needed him, but then Trine said they shouldn’t leave before seeing their friend who’d just arrived.

Grace was in the yard. Graham couldn’t believe it was her, even after she told the story of receiving two frog necklaces for Christmas two years ago because Graham and Ryan didn’t talk before shopping. But he wanted to believe it. The Doctor remembered a bedtime story Granny 5 (one of her seven!) used to tell her. Honestly, it would have put me to sleep, but what it boiled down to was they were in the plane of the Solitract, an energy/consciousness that had wanted to be part of our world but was incompatible and therefore exiled. As the Doctor told Yaz, it’s like a kid with nuclear chickenpox who just wants to join in on the fun but ends up infecting everyone. Cottage #2 was a trap.

The Doctor broke the news to Graham, who wasn’t ready to let Fake Grace go. He got a few extra minutes with her when the Doc opened the portal again (this time by reversing the polarity), and Hanne came through before it closed. She’d knocked Ryan out in Cottage #1 so she could follow them, knowing that the Doctor had written something on the wall that Ryan wasn’t willing to tell her. Hanne had fled the flesh moths, which descended when Ryan caught up with her in the tunnels and they started talking (the Doc’s string was so helpful). He told her how he’d found an outdoor speaker, which her dad set up to make those scary “thing” sounds. Ryan may not think he’s good with kids, but he knows you send them ahead when danger is approaching. 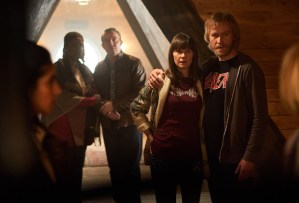 ‘SHE’S FURNITURE WITH A PULSE’ | With the Doctor not knowing another way to open the portal at Cottage #2 and Ryan trapped in the anti-zone, answers started coming. Hanne could sense it wasn’t really her mother when she hugged her. That world started shaking; it wasn’t built for this many humans. The Doctor saw Fake Grace take Graham’s hand, and she got it: “You want the same thing you’ve always wanted: to be with us. So you built a world you thought we’d like and taken forms we won’t reject.” Yaz started shouting all the ways Fake Grace wasn’t like the real “beautiful, shining superstar,” and Trine zapped her through the portal. Hanne went off on her dad and said she hated Fake Trine — back she went. The Doc had to beg Graham to reject Fake Grace, which he did after she suggested he stay — the real Grace would never let him leave Ryan in danger.

Erik was a tougher sell: “Erik, this woman is clearly an alien force collapsing two realities and impersonating your dead wife. Time to move on, mate,” the Doctor said. He wouldn’t, so the Doctor made the decision for him by offering the Solitract herself instead. After all, she’d lived and loved and lost more than Erik and could tell the Solitract anything it wanted to know about all it never had. Erik saw the eager look on Fake Trine’s face and finally admitted it wasn’t her.

With Erik through the portal, the Solitract had the Doctor in an all-white plane. The energy took the form of a frog, because it found them as delightful as real Grace had. It spoke with Grace’s voice when it asked to know all about our universe, but the Doctor’s hands began to vibrate. Friends help each other face up to their problems, the Doc said, and they had a big one.

It’s a true credit to Jodie Whittaker that she made kneeling and talking to what was probably a tennis ball in front of a green screen so moving. “You are the maddest, most beautiful thing I’ve ever experienced, and I haven’t even scratched the surface. I wish I could stay, but if either of us are going to survive, you’re gonna have to let me go and keep on being brilliant by yourself,” the Doctor said.

“I miss you. I miss it all so much,” the Solitract responded.

“I know. But if you do this, I promise you and I will be friends forever. You have to let me go,” the Doc pleaded.

The frog blinked and nodded.

“I will dream of you out there, without me,” the Solitract said.

The Doc backed up, blew it a kiss, and said, “Goodbye.” Then the frog raised its little arm and sent her through the portal. 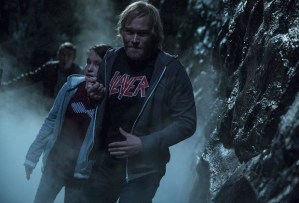 When everyone made their way back through the crumbling anti-zone and through the original portal to Cottage #1, the Doctor broke the mirror. Erik saw what the Doctor had written on the wall as instructions for Ryan — “Assume her dad is dead, keep her safe, find out who else can take care of her” — and realized it was time to start living again for his daughter and return to their wi-fi and friends in Oslo.

Ryan got a sweet hug from Hanne, but this week’s tearjerker moment came when Ryan, having heard that Graham saw Nan, reminded him that he missed her, too. At least they had each other, Ryan said. And then he called Graham “granddad” for the first time. That’s a well-earned moment.

What did you think of “It Takes You Away”? Where does it rank among the season’s episodes? Are you hoping the Solitract survived? Do you want to hear more about the Doctor’s grannies? (Five was her favorite and had lots of stories: “She also said that Granny Two was a secret agent for the Zygons…”) And how amazing is Bradley Walsh, who plays Graham, week after week? Hit the comments, and we’ll do it again next week for the season finale.