‘IT’S YE OLDE HIPSTER POP-UP HAPPENING’ | Once again, Team TARDIS ended up not where the Doctor intended. Rather than attending the coronation of Elizabeth I, they stumbled upon apple-bobbing (which the Doctor loves) and then a “ceremony” otherwise known as a witch trial in Lancashire. A local landowner named Becka Savage presided, and since she was played by Downton Abbey‘s O’Brien, Siobhan Finneran, you just knew she was evil. If the accused, Granny Twiston, drown while tied to the ducking stool, which Mistress Savage had carved from the mightiest tree on Pendle Hill (the site of real 17th Century witch trials), she was innocent; if she survived, she was a witch and would be hanged. Mistress Savage had already drowned 35 so-called witches and shot all the horses, “creatures of Satan.” The Doctor dove into the water, but she was too late to save Granny. She flashed her psychic paper, which said she was the Witchfinder General. She was now in charge until… 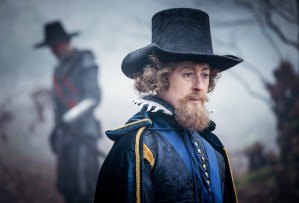 Enter King James I, “God’s chosen ruler and Satan’s greatest foe.” In real life, James was the author of the book Daemonologie and a self-proclaimed expert on witchcraft, so of course he would happily join forces with Mistress Savage to save the souls of the villagers even if it meant killing them all. King James demoted “the wee lassie” Doctor to assistant to the Witchfinder General (a quick-thinking Graham). Because she’s a woman, she could tap into her “innate aptitude for nosiness and gossip,” he said. Ryan, aka “My Nubian Prince,” captured the King’s attention, while Yaz missed all the action because she was off jumpstarting the real story.

While Granny’s granddaughter, Willa, buried the body, a tendril rose up from the muddy Earth and tried to grab her. Yaz saved Willa, then ran to tell the Doctor, Graham and Ryan as they were snooping in Savage’s room — finding an axe, a lot of hankies and a medicine bottle. Graham and Ryan then tried to occupy the King and Savage, the highlight of which was Ryan and the King exchanging sob stories. The Doctor and Yaz went to visit Willa, who told them her grandmother was a healer and they were actually related to Mistress Savage. The bigger surprise: When the ladies went to get a mud sample, the mud moved in the vial — and Granny’s body rose from the dead, followed by others. The mud was some kind of alien matter, reanimating the corpses. 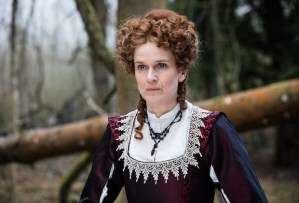 ‘THE MOST EVIL WITCH IN CHRISTENDOM’ | Naturally the Doctor with her sonic “wand” would be accused of being a witch at some point in the hour. It happened after Savage and the King saw the corpses and the Doctor began questioning what Savage wasn’t telling them, considering what they’d found in her room. The Doctor knew the witch hunt and the mud must be related. The King, who had just lost his trusted friend in the fray, believed the Doctor was “an agent of Satan,” too, and had her tied by her wrists to a tree. Before her trial, he wanted her to tell him everything about witchcraft, but she just wanted to talk about his mommy issues and the reason he stirs up hate.

As Savage prepared to “duck the witch,” the stool reacted to her touch and she bled mud from her eyes. Graham, Ryan and Yaz, who’d been off on a corpse-tracking mission, arrived just in time to beg the King to have the stool raised. When it was, the Doctor was gone. Thanks to a “wet weekend” with Houdini, she’d escaped. The corpses, which Graham, Yaz and Ryan had seen taking the axe from Savage’s room, had found their way to the water, too. They weren’t there to kill Savage, they were there to obey her, or rather, what was inside her…

Savage admitted she’d cut down that majestic tree, which was blocking her view of the hill. A tendril had grabbed her. She could feel something inside her, and in order to get herself right with god, she decided to rid the evil around her. Granny had been treating her but refused to cut out the evil from her leg, so she turned on Granny for knowing too much.

Now that the truth was out, Savage couldn’t hold back the evil inside her any longer: What emerged was the queen of the Morax, an alien army that had been imprisoned in Pendle Hill for war crimes. That “tree” had been the lock and Savage opened it. The queen took King James and wanted to fill his body with the Morax King, and the world with rage, and force, and hate. 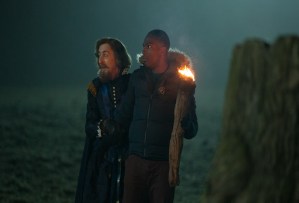 ‘ONWARDS TO SAVE THE KING’ | In the end the Doctor, rightly wearing the Witchfinder General hat that King James had given Graham, led Team TARDIS and Willa to the hill with flaming pieces of the ducking stool that would repel the corpses. The Morax King tried to emerge from the tree, but the Doctor successfully reactivated the prison. King James cruelly ended the Queen, which put him back on the Doctor’s bad side. To make it up to her, he promised never to speak of her or the TARDIS and to erase the village’s name from history. Willa decided to become a healer in honor of her grandmother and the Doctor, and Ryan kindly declined the King’s invite to return to London with him as his protector.