Just in time for the holiday season, Doctor Who has given us an episode that we’ll think of every time we receive a package from Amazon. “Kerblam!”, written by Pete McTighe, showed what could happen when companies become 90 percent automated: People will still be the biggest danger.

‘SPACE POSTMAN. I’VE SEEN IT ALL NOW.’ | The Doctor received a package from Kerblam!, the biggest retailer in the galaxy, via teleporting deliverybot. It wasn’t the fez she presumably ordered two regenerations ago that was noteworthy but the message on the back of the packaging slip: HELP ME. Off TEAM TARDIS went to Kerblam!’s massive warehouse where they met Judy (Broadchurch‘s Julie Hesmondhalgh), the “head of people” who was very proud of the fact that the company has the largest human workforce in the galaxy (the required 10 percent at every level). The team posed as new workers and got their assignments — plus ankle bracelets to track their whereabouts and productivity.

Yaz’s kind colleague Dan tugged on the heartstrings with his story about only traveling to see his 6-year-old daughter twice a year because he was saving his wages for her education. Obviously he was going to die, which he did when he took Yaz’s place to fetch something in a desolate part of the warehouse where Dan knew another worker had been sacked (or, rather, grabbed by a bot and later killed). Yaz followed Dan, heard him scream, and found only his DAD necklace (he’d said it’d outlast him!) and her busted scanner. The Doctor and Ryan also learned from the earnest Kira, their colleague in packaging, that a few workers had recently left the company. Graham, meanwhile, was working in maintenance with the likable loner Charlie, who seemed surprised to have a new colleague and clearly had a crush on Kira. 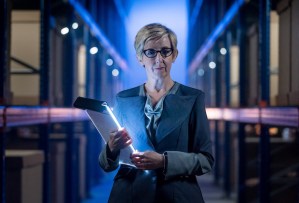 ‘WE DID IT. WE’RE TOTALLY NOT DEAD.’ | The Doctor confronted Judy and the warehouse boss, Jarva Slade, about the missing employees, and then she waited to sneak back into Slade’s office with Ryan and Yaz to snoop around. They found it odd that he had paper files locked in a cabinet, detailing the disappearances. Judy followed their ankle bracelets there (hey, the Doctor can’t remember everything) and seemed to prove her innocence when she ripped the head off a bot that was trying to kill Charlie during a total power blackout. She did care about her employees. What you may have missed was that the bot, who had reported an error, was saying “Investigating… Investigating… Investigating” as it held Charlie by the throat. The system, which we’d later learn was trying to thwart Charlie’s plan involving mass casualties and had sent the message to the Doctor, must have kept that bot powered?

From there, the action picked up: Kira was told she was employee of the day and would be receiving a gift — something she’d only ever gotten once before in her life. Judy got a notification from the system that Kira was missing (which was new), and her signal was last detected in dispatch on the foundation level, where all the power was drained to. Ryan took point on the rescue mission, which led him, Yaz, and Charlie down a chute with Goonies-level glee and terror. It was conveyor belts as far as the eye could see (very Monsters, Inc. door sequence). When Charlie fell to a conveyor belt beneath them, Yaz and Ryan held hands and jumped down to rejoin him together (enjoy that moment, shippers?). At that point, we still weren’t suspecting Charlie, so it was sweet to see how much he seemed to appreciate not being alone. 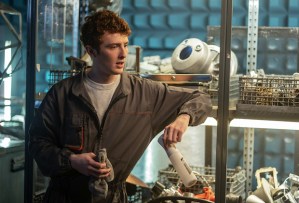 ‘THE SYSTEMS AREN’T THE PROBLEM. HOW PEOPLE USE AND EXPLOT THE SYSTEM, THAT’S THE PROBLEM. PEOPLE LIKE YOU.’ | At the same time, the Doctor had succeeded in communicating with an original Kerblam! deliverybot named Twirly, which, like the handy layout of the facility that Graham had obtained, was conveniently on display at the warehouse. The Doctor hooked Twirly up to the system and learned the truth about the HELP ME message. Now the system had more to say: Urgent help was needed in dispatch. Down at the foundation level they found Slade, who’d been documenting the missing employees on paper because he didn’t trust the system. They also found a vat of liquified remains (very Bones) and a literal army of deliverybots holding packages. The power drains the facility had been experiencing were actually efforts to store enough power to send all the deliverybots out at once. What does each package have in common? Bubble wrap.

The Doctor’s theory was confirmed when Kira, who’d been taken to an interrogation room, finally got her gift. All that was inside was a tiny sheet of bubble wrap. She popped one of the bubbles and kaboom! Charlie had been beating on the mirror and screaming for her not to do it — Yaz and Ryan realized that meant he knew something bad was going to happen.

In the end, Charlie confessed. His generation wasn’t going to stand by as only 10 percent of people got to work. He’d lied about who he was; he was actually someone who studied robots, explosives and teleportation. He’d taken employees as test subjects to make sure his tiny bombs would be effective. The Doctor told Charlie the system had taken Kira to show him what others would feel if those they cared about were murdered in his attempt to erode people’s trust in automation and have them see it as “imperfect technology without a conscience.” He didn’t care that he was the one who’d malfunctioned while the system was fighting to do what was right. He hit the button to set the delivery in motion and destroyed the gadget. The Doctor used Twirly to change the address of all the deliveries to right there — and to instruct the deliverybots to open the packages and do what everyone does with bubble wrap. She tried to get Charlie to leave with them when she teleported the group to safety, but he stayed behind and died with his plan.

What did you think of “Kerblam!”? Did Yaz suggesting they take the DAD necklace to Dan’s daughter get you to tear up? We almost made it a week with dry eyes. Did you recognize the voice of Kerblam! as Broadchurch‘s Matthew Gravelle (aka Joe)? Showrunner Chris Chibnall is nothing if not loyal. Are you wondering why Ryan didn’t go boom since he popped the bubble wrap at the start of the episode? It was old pre-Charlie stock. And who’s going to watch the Agatha Christie episode “The Unicorn and the Wasp” now? Season 4, episode 7, friends.