What good is having a friend with a time machine if you can’t spy on a family member when they were younger? That’s the question Yaz asks the Doctor at the start of this week’s Doctor Who, “Demons of the Punjab,” written by Vinay Patel. It was yet another tearjerker as the Doctor reluctantly agreed to take Team TARDIS back to the youth of Yaz’s grandmother’s so that Yaz could learn the history of the broken watch her Nani Umbreen gave her and said must never be fixed.

‘ONE HOUR… NO INTERFERING’ | Although it was Nani’s birthday, Nani was the one handing out presents. She said she wouldn’t tell Yaz, her favorite granddaughter (sorry, Sonya), about the watch until she was older. Cue the TARDIS’ telepathic navigation system. At first the Doctor didn’t realize they’d arrived in India circa August 1947, right as the border between India and Pakistan was being drawn. She just knew a nice young man named Prem had agreed to take them to Umbreen, who Yaz said was family. The first shock: Umbreen was to be married the next day to Prem — but he wasn’t Yaz’s grandfather.

Prem had a younger brother, Manish, who insisted that Umbreen and her mother should live in the new Pakistan “with the other Muslims.” The argument was interrupted by the appearance of two “demons” (read: aliens) who Team TARDIS and Prem chased. They all assumed the demons had killed the holy man that was to marry the Muslim Umbreen and Hindu Prem. Because Prem had seen the demons before and knew the forest, he accompanied the Doctor and Ryan on a search that ultimately led to the aliens’ lair. 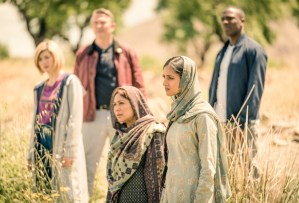 ‘WE CAN’T HAVE A UNIVERSE WITHOUT YAZ’ | The aliens were Vajarians, an ancient species the Doctor had never encountered personally but knew to be the deadliest assassins in the universe. Prem had seen them on the battlefield in Singapore, standing over his older brother Kunal’s dead body. When a large vial containing some of the same purple dust they’d seen near the holy man’s body emerged, the Doctor took it. (She’s as bad as Ryan when it comes to touching things before thinking it through.) The two Vajarians appeared and another chase ensued. The Doctor was able to use the Vajarians’ own technology against them to build a temporary barrier around the family’s farm. She was determined to protect Umbreen so Yaz wouldn’t be erased.

Analyzing the purple substance proved difficult since it overloaded the sonic screwdriver. The Doctor was forced to build an old-school chemistry set that employed ox spit and chicken poo (sure, why not). The wait for results gave us time to witness Umbreen and Prem’s pre-wedding celebrations. The men played cards before Manish aired his objections to the interfaith wedding; the women enjoyed Umbreen’s mother’s henna skills before Umbreen asked the Doctor to officiate the ceremony. (The Doctor happily agreed: She hadn’t married anyone since Einstein — and his parents hadn’t approved either, she noted).

‘ALIENS WITH COMPASSION’ | The Vajarians used their technology to bring the Doctor to them for some crucial exposition: They’re no longer assassins, they’re witnesses. As they hunted, their world was destroyed. All that remains of their home and the people they weren’t present to grieve is what’s in the purple dust. Their mission now is to honor life as it passes and those who die alone. That’s why they were with Kunal and the holy man. And why they were staying close: Prem was going to die on his wedding day.

The Doctor filled the team in, but reminded them that they couldn’t tell anyone else about Prem’s fate or interfere. It made for another gut-wrenching scene when Prem told Graham and Ryan that the violence was getting closer. “Nothing worse than when normal people lose their minds,” he said, explaining how Hindus, Muslims, and Sikhs who’d lived alongside each other for decades were now being told their differences are more important than what unites them. Prem said he didn’t know how you protect people when hatred is coming from all sides.

“All we can strive to be is good men. And you, Prem, are a good man,” Graham said, then hugged him. 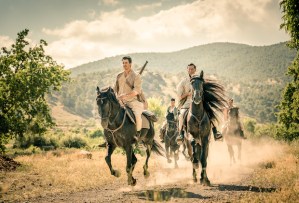 ‘LOVE IS THE MOST POWERFUL WEAPON’ | The wedding took place right on the border, with Umbreen standing on the Pakistan side (thus becoming the first woman married in Pakistan). The Doctor, with a tiny flower in her hair, spoke beautifully about the certainty the young couple had in each other and love being a form of hope. They’d found love, fought for it, and were committing to it. They were also promising to blend their lives, which Umbreen did when she asked Yaz to tie the couple’s hands together, as per Hindu tradition. Umbreen hoped another gesture, praising Manish for being the one to get them all through the drought and calling him brother, would win his approval, but he refused to embrace the union. He hadn’t worked the land for her, he said, he did it for his brothers: one who hadn’t come back, and one he wish hadn’t.

Manish stormed off, and the Doctor followed to confront him: The Vajarians had shown her that Manish had killed the holy man with Prem’s rifle. Meanwhile, Prem wanted to do something to honor Umbreen’s faith and gave her his watch. It dropped as he was handing it to her. “Cursed,” Umbreen’s mother said. But Umbreen thought it was perfect: “This is us, forever. Our moment in time.” That’s why she never wanted the watch fixed.

The Doctor warned everyone that Manish was leading armed men to the farm. Yaz went to help Umbreen and her mother pack what they could carry, and Yaz saw a map with Sheffield marked on it. Umbreen said her father had brought it home from the market, and she’d decided that wherever her finger landed on it, she’d someday go. Prem and Umbreen shared an emotional goodbye as he insisted everyone — including the Doctor, who offered to stay — flee while he confronted his brother alone. He had to know it was a suicide mission. Giving the others time to escape was the only way he could protect them. The Vajarians promised to watch over Prem, so Team TARDIS didn’t have to witness his final moment. Manish didn’t pull the trigger himself; he watched as a man Prem had fought alongside in Siam did.

Back in Sheffield, Yaz showed off her henna to her Nani, who critiqued the design. Yaz asked Nani if she’d loved her granddad (she had) and if she was happy with the life she’d lived in Sheffield (she was, it’d given her stability, a home, and a family). Nani offered to tell Yaz about the watch, but Yaz said another time. The only thing they needed to say now: “I love you.”

What did you think of “Demons of the Punjab”? Should we be concerned that the Doctor assumed the Vajarians were there to assassinate her? Is it foolish to hope Nani Umbreen realized the Yaz who’d been a part of that wedding day was the Yasmin that was her granddaughter? (Was that why she wasn’t planning on telling Yaz about the watch until she was older than she’d looked in 1947)? And how much do you love Graham and his ability to always say the right thing? Hit the comments, and we’ll do it again next week.