You wouldn’t expect a non-carnivorous alien that resembles Stitch from Lilo & Stitch (or a Gremlin that’s mated with an adorable Adipose from Doctor Who‘s fourth season) to be much of a foe for the Doctor. And really, it wasn’t in “The Tsuranga Conundrum,” written by showrunner Chris Chibnall.

Yes, the PTING wanted to feed on the energy powering the medic ship that rescued Team TARDIS after they encountered a sonic mine on a junk planet, which proved tricky — mostly because the automated ship was in danger of self-destructing after repeatedly sensing the presence of the sharp-toothed PTING. But in the end, the real villain of the hour seemed to be self-doubt… for the young medic who had to soldier on after her more experienced colleague was lost, the young male about to give birth to a child he didn’t feel capable of raising, and the decorated general and her engineer brother who hadn’t yet been brave enough to say “I love you.”

‘IT JUST SORT OF IGNORED YOU THERE, DOC’ | As mentioned above, Team TARDIS found themselves in a bit of trouble when a sonic mine detonated as they were scavenging. They only survived because a space ambulance happened upon them and the two-person crew spent four days stabilizing their organs. Because the Doctor was still in considerable pain and consumed by the fear of being separated from her TARDIS yet again, she was determined to override the ship’s navigation system and return to the junk planet — until chief medic Astos reminded her that she was putting the lives of the other patients, including General Eve Cicero (accompanied by her brother, Durkas, and her droid Ronan) and the pregnant Yoss, at risk.

The Doctor genuinely apologized, which is probably why Astos trusted her when they decided to investigate the arrival of something that had just crashed into the ship. It had quickly moved through the shields (which the Doctor detected with her stethoscope), and was now aboard. They should have stuck together, since they had no idea what they were facing, but they separated and each went in the direction of one of the ship’s two life pods. The one on the Doctor’s side had already been jettisoned. Even though she begged Astos not to engage, he couldn’t help himself: When the door to his life pod opened, he stepped inside to have a look around. The door shut, the systems were disabled and he was jettisoned off — but not before he was able to give his colleague Mabli a pep talk over their coms.

The Doctor came running, but she was too late to save Astos (a shame, since he was handsome, kind, and clearly had good instincts about people/two-hearted aliens). We got our first look at the PTING, which had no respect for the Doctor’s authority or sonic screwdriver. Fortunately, the creature regurgitated the latter, though it was no longer working. Thanks to Mabli’s ocular recorder, the ship was able to identity the PTING, which is impossible to wound, kill, or even confine because it’ll eat through anything and has toxic skin.

‘IMAGINE THE SOLUTION AND WORK TO MAKE IT REALITY. WHOLE WORLDS PIVOT ON ACTS OF IMAGINATION’ | The Doctor needed a few moments to give Mabli her credentials (she’s a Doctor of “medicine, science, engineering, candy floss, Lego, philosophy, music, problems, hope — mostly hope”) and learn that the home medical facility governing the operation of the ship can detect hostiles aboard and will detonate a bomb as a precaution if its queries are dismissed three times. That gave Yaz and Ryan time to find out that Yoss was having a boy that he planned to give up, which in turn was an opening for Ryan to realize that Yoss is the same age Ryan’s father was when he was born, the same age Ryan is now. Ryan told Yaz that he hadn’t seen his father in a year, and that his dad probably found it hard to be around him after his mother died because Ryan reminded him of her. His mother died of a heart attack when Ryan was 13; Ryan was the one who found her in the kitchen.

After the Doctor finally briefed everyone onboard about the PTING, Yoss went into labor and demanded that Graham and Ryan be his doulas. Yaz and Ronan were left to guard the ship’s all-important antimatter drive following the Doctor’s soliloquy about her love for it. And the General’s brother was tasked with engineering a system that would allow the General to pilot the ship through an asteroid field and get to its destination quicker while the Doctor transmitted a phony flight plan to make everything seem status quo. For added drama, the General revealed her true illness: something called Pilot’s Heart, which means she needs to use adrenaline blockers just to get through the day.

It took the Doctor too long to realize the PTING feeds on energy — that’s why it went for the life support systems in the life pods, her sonic screwdriver, and now the antimatter that fuels the entire ship. Yaz and Ronan momentarily stunned the PTING, and Yaz was able to wrap it in a 67th-century super blanket, pick it up and give it a kick down the hall (goal for England!). 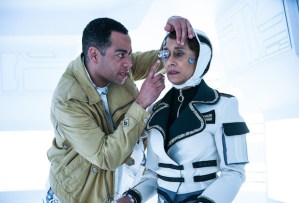 ‘PEOPLE PREVAIL. HOPE PREVAILS.’ | Things happened quickly from there: While the General bravely piloted the ship (looking a bit like she was in Pacific Rim), the Doctor made the third and final PTING denial, causing alarms to go off. The sonic chose an excellent time to “self-reboot,” and helped the Doctor locate the bomb and then speed up its detonation so that it would attract the PTING. As the Doctor planned, the PTING ate it and absorbed the blast. She ejected the PTING from the ship, and all should’ve been well. But the General was clearly losing strength. At least she and her brother got to have a heart-to-heart before hers gave out and he stepped in to safely land the ship. 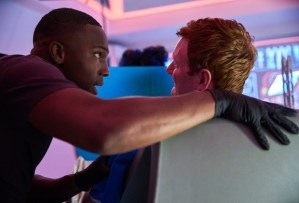 Despite Graham’s extensive Call the Midwife viewing, Mabli did most of the work delivering Yoss’ baby. Ryan was there to remind Yoss that a father doesn’t have to be perfect, he just has to be there. Together with Graham, Ryan helped cut the chord(s). Yoss decided to try being a father, and he wanted to name the baby after an Earth hero from his people’s textbooks in his new friends’ honor. What history do we think Avocado Pear was credited with making? And let’s hope labor is also painless for the women in Yoss’ species.

Mabli promised the Doctor that she would soon be teleported back to the TARDIS, so we didn’t get to see that reunion. The hour ended with Ronan, who’ll be shut down now that his service has ended, leading them all in a tribute to the General: “May the saints of all the stars and constellations bring you hope, as they guide you out of the dark and into the light. On this voyage and the next. And all the journeys still to come. For now and evermore.”

What did you think of “The Tsuranga Conundrum”? Do you think we’ll hear more about the Book of Celebrants, which apparently includes a volume on the Doctor? Do you want to meet Ryan’s dad (which we’ve got to be building toward)? Are you surprised Hamilton plays long enough for the Doctor to have seen “all 900 casts”? Hit the comments, and we’ll do it again next week.