This week’s episode of Doctor Who, written by showrunner Chris Chibnall, might have been called “Arachnids in the UK” and featured giant spiders, but it wasn’t really about arachnophobia — it was about the world’s fear of President Donald Trump.

Chris Noth (more The Good Wife than Sex and the City) guested as businessman Jack Robertson, a hotelier planning to enter the 2020 race, who thought his biggest problem was that one of his companies had been cutting corners when disposing of corporate waste in the coalmine-turned-landfill beneath his next luxury hotel. The hour also introduced us to Yaz’s family and finally revealed why the three companions want to stay with the Doctor, and henceforth be known as Team TARDIS. 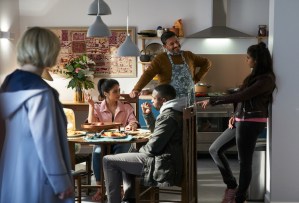 ‘TEA AT YAZ’S. NEVER BEEN TO TEA AT YAZ’s!’ | The Doctor finally got them safely back to Sheffield, and there was a reason the TARDIS parked itself right outside of Yaz’s family’s apartment building. While Graham left to face returning to the home he’d shared with Grace, The Doctor and Ryan accepted Yaz’s invitation to tea. After we learned that Yaz’s sister, Sonya, is the worst and the Doctor still has work to do on her small talk (can the TARDIS not fit a purple couch for her?), Yaz got a call to come pick up her mother, Naja, who’d just been fired from her job at Robertson’s hotel, and the Doctor and Ryan went next door to fetch a parcel that had been left with Yaz’s neighbor.

They met Jade, who was concerned that her colleague Anna hadn’t shown up for work in a few days. The Doctor broke into the flat with her sonic screwdriver and immediately knew something was wrong — the flat was filled with spiderwebs. They found Anna lying cocooned. A large spider came out from under the bed, and then Mission: Impossible‘d itself out of the room, onto the ceiling, and back to the floor in the hallway, where the Doctor was waiting to contain it with two of its least favorite things: garlic and vinegar. Graham met back up with them after he’d found a giant spider in the attic, which scared him more than the visions he was seeing of Grace.

‘SOMETHING’S HAPPENING WITH THE SPIDERS IN THIS CITY’ | Jade was a master of exposition: A research fellow in zoology specializing in arachnids, she’d been tracking reports of strange spider behavior and sightings for that time of year. Her work centers on utilizing spiders’ genetic gifts, like their silk being as strong as steel and as tough as Teflon. The lab was working on an enzyme to increase the insects’ lifespan, because spiders keep growing for as long as they live.

We didn’t get to see the one that took Robertson’s flunky Frankie, who’d gone down into the old mine tunnels to film an “insurance policy” about her role in the landfill. Presumably it was the same mega one that made its way up through the bathtub during Robertson’s scheduled bathroom break and carried off his bodyguard, Kevin (whom Robertson had trapped in the room like a real class act). The Doctor figured out that Robertson’s hotel was at the epicenter of the action, so Team TARDIS and Jade showed up just in time to hear Kevin firing his final shot, and since Yaz and her mother had just come from the cobweb-covered room beside Robertson’s pit stop, they knew where to run to. 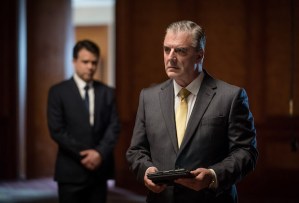 ‘WE’RE THE FLIES’ | The only decent thing Robertson did the entire episode was immediately tell the Doctor about his arachnid encounter when she flashed her psychic paper as an alleged crisis investigator. After she saw the size of what they were dealing with, they tried to escape (“Word of advice, mate: Run now, ask questions later,” Graham told Robertson), but the spiders had webbed over the exit. They ran next to the kitchen, where we learned Robertson’s backstory (which includes hating Trump for decades) and got a few moments of levity via jokes about Robertson being targeted by the Russians and Ed Sheeran’s popularity.

Graham and Ryan went off to capture one of the spiders under Jade’s watchful eye, while the others went with Robertson to get the hotel’s floorplan. That gave Naja time to show how little she knows about her daughter (she asked if Yaz and the Doctor were seeing each other, then later inquired the same thing about Yaz and Ryan) and Robertson a chance to explain that he has 15 hotels throughout the world on repurposed industrial sites. Naja knew this site had been a coalmine.

‘I CALL PEOPLE DUDE, NOW’ | While Noth’s fright acting could use a bit of work, his condescension when speaking to the Doctor was spot on. He tried to stop her from taking them down to the tunnels. “Dude, I have all the authorization I ever need,” she said, putting the sonic to use again. They found the human cocoons and then the giant landfill, and Jade pieced it together: Among the waste disposal’s clients is the lab, which throws away its spider carcasses. One of the spiders must have been clinging to life and fed on the toxic waste, then had babies.

Jade had sent Ryan and Graham back out to find the largest spider, and they did. They’d entered the ballroom deep in conversation about the letter Ryan’s father had written him — which said Ryan could come live with his “proper family” now, which Ryan didn’t appreciate — and they’d both forgotten to check the ceiling. There she was. With her contained for the meantime and the last bit of exposition done — some of the young spiders stayed in the hotel, others had left and disrupted the ecosystem with their pheromones — the Doctor decided the best idea was to lure the smaller spiders into Robertson’s panic room.

Robertson bragged about having food for six months, an entertainment center, one book and an arsenal of weapons. He couldn’t understand why the Doctor didn’t want to shoot the spiders: “Why don’t you do what normal people do? Get a gun, shoot things like a civilized person.” As living, breathing organisms, they deserved to be treated with dignity and suffer humane deaths, she said. Since spiders sense their prey’s vibration, Ryan played Stormzy’s base-heavy “Know Me From.”

Presumably the plan was to lock them in and starve them. Or, depending on how quickly spiders grow, perhaps their unnatural size would cause them to suffocate the way the mother spider was doing in the ballroom. The Doctor was prepared to approach her, Ghostbusters-style, with a concoction of peppermint and tea tree oil from the spa. But then the Doctor saw she was already dying. “I’m so sorry this has happened to you,” the Doctor said, knowing it wasn’t the spider’s fault and that it was confused and afraid.

Robertson, jonesing to use the gun he’d swiped off Kevin’s dead body, decided to shoot it anyway. “How’s this for fire and fury?” he hissed. He tried to call it a mercy killing. “I don’t see any mercy in you,” the Doctor said.

“I don’t need your approval, Doctor. This is what the world needs right now. This is what’s going to get me into the White House,” Robertson replied. And then he walked out.

“God help us all,” Graham said.

As an American viewer, especially this week with another mass shooting and another round of people (like Trump) calling for armed guards in locations where we shouldn’t need them, it was painful to watch. 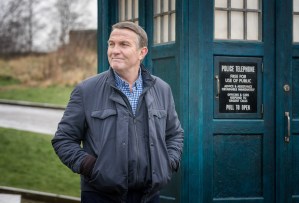 ‘WELCOME, ABOARD, PROPERLY’  | To end on a happier note, the companions each made their way back to the TARDIS, which opened its door for them. Graham had realized he didn’t want to grieve for Grace in their home; he’d rather wait for his grief to subside while off on adventures with the Doctor. Ryan didn’t want to return to his warehouse job (or deal with his father suddenly wanting to be in the picture). And Yaz wanted more from life than her family driving her crazy and feeling unfulfilled professionally. The Doctor asked them all to be sure, given that she can’t guarantee their safety. They were all certain it’s what they wanted. Team TARDIS took the controls together, and away they went.

Your turn. What did you think of “Arachnids in the UK”? Did you find the spiders at all scary? Was Chris Noth too over the top, or just right? Do you want to see him return so we learn if Robertson’s 2020 bid was successful? And what did you make of the Doctor’s offhanded comment at Yaz’s flat: “Sisters. I used to have sisters. I used to be a sister, in an aqua hospital. Actually turned out to be a training camp for the Quistin Calcium Assassins”? Hit the comments, and we’ll do it again next week.