The first two episodes of Doctor Who Season 11 made many viewers tear up because of what it meant to see a woman play the fictional hero, to be (re)united with the TARDIS. Episode 3, “Rosa,” co-written by famed British author Malorie Blackman and showrunner Chris Chibnall, was an even more emotional tearjerker because it was about guarding the history made by real-life hero Rosa Parks, the black woman who refused to give up her seat for a white passenger on a crowded bus in Montgomery, Alabama in 1955.

As we saw at the opening of the hour (said to be the first to have a writer of color in the series’ long history), Team Doctor not only had to make sure Rosa got on a packed bus on the evening of Dec. 1, but that the bus was driven by James Blake. He really was the same driver who, 12 years earlier, had driven off without Rosa after insisting she re-board the bus using the back door to enter the “colored” section. The Doctor’s foe: the racist mass murderer Krasko (Revenge’s Josh Bowman), a former inmate of the prison Stormcage, which Whovians known as the facility where River Song did time (when she wasn’t busy escaping).

‘IF SHE CAN LIVE HERE HER WHOLE LIFE, A COUPLE OF HOURS AIN’T GONNA KILL ME. IT AIN’T GONNA KILL ME, RIGHT?’ | We began with the Doctor’s ninth — or fourteenth — attempt to get her companions home. This time the TARDIS had mistakenly brought them to Montgomery, one day before Rosa’s historic ride, because it’d located artron energy, the same energy it uses. As the team went out to investigate, Ryan tried to return a white woman’s dropped glove and got slapped hard by her racist husband, who threatened to have him lynched. Seamstress Rosa, played by Vinette Robinson — who, fun fact, appeared in the 2007 Doctor Who episode “42,” the first one Chibnall ever penned for the show — stepped in to diffuse the situation. She told the Doctor and her companions about Emmett Till, the 14-year-old black boy from Chicago who’d been vacationing in Mississippi that August when his mutilated body was found in the river after he talked to a white woman. They all recognized Rosa’s name, of course (though Ryan had to be reminded of her brave act). After a waitress refused to serve both Ryan and “Mexican” Yaz, the Doctor told her companions they could all wait in the TARDIS while she made sure nothing stopped Rosa. Ryan and Yaz weren’t having it; they were in this together. No time to eat, though, as is the Doctor Who way. 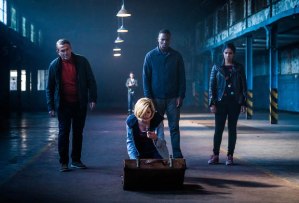 ‘NEVER GIVE THEM THE EXCUSE’ | The artron signals converged at the bus company, which naturally worried the Doctor. They found a suitcase (with the initials G.F.B.) hidden from view. We’d seen the Greaser-looking Krasko try to subtly intimidate Rosa earlier, so you could guess the tools inside belonged to him. Cue his entrance and some much-needed exposition about his backstory, his temporal displacement weapon that can blast someone or some things to another year, and the vortex manipulator on his wrist that allows for “cheap and nasty time travel” (something Whovians have seen used by Jack Harness and River Song). Krasko knew about the TARDIS, and made it clear he’s someone who steals and barters. He and the Doctor parted ways after issuing their respective warnings, and the team retreated to sneak Yaz and Ryan into the “whites only” Sahara Springs Motel so they could form a plan — and have the Doctor make an unintentionally timely joke about being Banksy when Graham worried about her using the room’s wall as a whiteboard.

The Doctor used her sonic to hide the ink when Officer Mason knocked on the door to make sure the hotel’s racist policy was being upheld. Graham pretended to be Steve Jobs, in town to pitch what would become the iPhone, while Ryan and Yaz snuck back out through the bathroom window to hide behind a dumpster. It was an appropriate setting for their conversation about the racism they still face in 2018, and the lessons her father and Ryan’s Nan had taught them about holding their tempers.

To protect Rosa, they were going to have to spend the day learning her daily routine, and that of James Blake, whose name Graham knew. Nan, who’d owned a “Spirit of Rosa” T-shirt, referenced when she first met her retired bus driver husband. The show is doing an excellent job of keeping Nan’s memory alive: the tears in Graham’s eyes as he said he wished she was there now reminded us of their grief; the smile on Ryan’s face when he quipped, “I don’t, she’d start a riot” made us feel like it’s okay that they’re moving on. 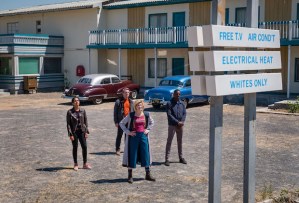 ‘STALKING ROSA PARKS — DON’T KNOW ABOUT THIS THIS’ | The team had to go old school for their research: Yaz hit the newspaper to find out where Rosa worked, Ryan got her home address from the phone book, and Graham determined the three bus routes she could travel. They hopped on the most likely line, with Yaz not knowing where someone of Pakistani heritage should sit. They got off at Rosa’s work stop and waited to follow her home so the Doctor could pose as an employee doing a survey and ask her about her riding habits. Ryan followed Rosa off the bus, and — whew! — there was a reason he was scripted to be so obvious when tailing her. A woman as smart and assertive as Rosa would confront him, and the fact that he was so inept at being covert was proof he wasn’t a spy for the police or FBI. She had to be careful since she was about to invite him in to serve coffee during her meeting with her husband, Raymond Parks, Fred Gray, and Martin Luther King. The first tears of the hour came when Ryan ended the evening by telling Rosa it would get better — not perfect, but better — and thanked her, on behalf of him and his nan. Rosa said she hadn’t done anything; Ryan just smiled.

Meanwhile, the Doctor was off separating Krasko from all of his tools and confirming that he had a neuro restrictor placed in his brain by Stormcage, so he can’t kill or injure a living thing. Krasko could, it turned out, still get James Blake’s schedule changed so the route was reassigned, vandalize Blake’s bus so it wasn’t able to run that night, hang signs up saying that bus was suspended, and block the road.

The Doctor and Yaz went to the new driver’s house to inform him that he and his wife had won a trip to Vegas to meet Frank Sinatra (good thing Elvis had loaned Frank that secret mobile phone against the Doctor’s wishes), and Graham and Ryan crashed James’ fishing trip to bait him by telling him that a group of black passengers were planning to stage a sit-in on all bus routes that night. Graham hotwired a replacement bus, and Ryan, who’d conveniently been told how the temporal displacement weapon worked earlier in the episode, used it to send Krasko back in time as far as the setting would go.

‘I DON’T THINK I SHOULD HAVE TO’ | To keep eyes on Rosa until she boarded the bus, the Doctor ripped her coat and asked Yaz to stay with Rosa while she mended it. Hearing more of that conversation between a trailblazer and an optimistic young woman who’s aware of the debt she owes would have been welcome, but they had a schedule to keep. Because of Krasko’s delay tactics, the bus wouldn’t have been crowded enough for Rosa to be asked to give up her seat if the Doctor and the companions got off. So they had to witness the moment that Rosa calmly but powerfully refused to comply — and they couldn’t help her when the bus driver shouted at her. That sequence was beautifully performed by Robinson, right down to the satisfied nod she game Ryan as she was arrested while Andra Day’s anthem “Rise Up” played in the background.

Back at the TARDIS, the Doctor went into history teacher mode: the bus boycotts begin, and in just over a year, segregation on buses in Montgomery would end. Rosa and her husband lose their jobs, but they keep fighting, and in 1999, Rosa receives the Congressional Gold Medal from President Clinton, recognizing her as a living icon for freedom. She changed the world, and, yes, the universe: Asteroid 284996 really is named after her.

Your turn. What did you think of “Rosa”? Where does it rank among Doctor Who’s most moving episodes? Do you think we’ve seen the last of Krasko? Could he be the Timeless Child, aka Jack Harkness, mentioned to the Doctor last episode? Are you tempted to ship Yaz and Ryan after that comment about their former classmate not being on her level? Hit the comments, and we’ll do it again next week.