If you experienced happy tears during Jodie Whittaker’s debut as the Doctor, you likely welled up again watching the end of Season 11’s second episode, “The Ghost Monument,” written by showrunner Chris Chibnall: “This is my TARDIS,” the Doctor said, introducing Graham, Ryan, and Yaz to her lost friend.

For a brief moment, the Doctor had doubted that she’d be able to reunite with the TARDIS and save her companions, believing they’d all be stranded on the deadly planet Desolation after they’d helped two competitors win the Hunger Games-esque Rally of the Twelve Galaxies. But when The Doctor heard that trademark sound, she knew her ride was on its way. “Come to daddy. I mean mummy. I mean, I really need you right now,” she said, willing it to stabilize. Once Whittaker ran to the TARDIS and touched its new sign with such love and admiration (“You’ve done yourself up… very nice,” she said beaming), it felt real — she is the Doctor.

‘WELCOME TO WHAT I PRESUME IS YOUR FIRST ALIEN PLANET; DON’T TOUCH ANYTHING’ | We picked up with Team Doctor still dangling in space. Graham and Ryan were scooped up by a woman named Angstrom while the Doctor and Yaz were saved by a man named Epzo. Luckily, their rescuers were headed to the same place — a glamping tent on the desert-like Desolation to get directions from a smug hologram for the final stage of the rally. Angstrom and Epzo were the only remaining contestants: Whichever one got across the water and through the ruins to reach the site of the Ghost Monument first would win transport off the planet and enough currency to provide for themselves and their clan. The rules: No sabotaging, injuring or killing each other, and they shouldn’t travel at night or touch the water. The Doctor convinced the hologram to show her what the Ghost Monument, which only appears “every thousand rotations,” looks like: It was the TARDIS. Who else got chills?

Once Graham, Ryan, and the Doctor figured out how to get a solar-powered boat running, the first part of the journey gave them/us time to learn more about the finalists. Epzo trusted no one, a lesson his mother taught him when he was young by letting him fall and injure himself after saying she’d catch him. Angstrom was from a tiny planet that is being systematically cleansed — half her family is in hiding, the other half is on the run. Winning would give her the means to locate and reunite them, if they’re still alive. Clearly we’re rooting for her. 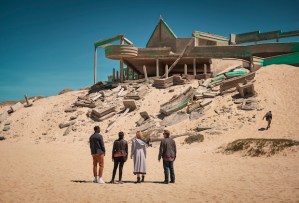 ‘SEE, BRAINS BEAT BULLETS’ | Once they reached the ruins, the group parted ways. Team Doctor encountered robotic sniper guards first, but they only became activated when Epzo fired at one. Following some quality evasive running from our foursome, the Doctor realized they’d landed right in the middle of the guards’ target practice. Ryan wanted to pick up a discarded weapon and fight back, but the Doctor’s plan, as always, was to out-think the guards.

“Been doing it all my life,” the Doctor insisted.

Ryan still hadn’t learned it’s best to follow the Doctor’s orders, so he ran out with a gun and fired, knocking over the guards like he was playing a video game. Slight problem, though: they all got back up and he couldn’t figure out how to reload. Ryan screaming as he fled back inside was played for laughs, but it was also proper punishment. The Doctor fried the guards’ systems, which gave them time to escape and reunite with Angstrom and the injured Epzo.

‘I LOVE A BIG, BLOCKED DOOR’ | The Doctor wanted answers about the planet — specifically, what had happened to its inhabitants? — so they went underground into the tunnels. While Epzo took one of his heroic naps, the others gathered intel, including the route of the tunnels and the way to the Ghost Monument. The Doctor then translated drawings on the floor. Scientists had been abducted, tortured and forced to find new means of destruction — poisons, weapons and creatures — while their families were held hostage. The captors were the Stenza, the same alien race as the Big Bad in the season premiere. The scientists had tried to destroy all of their work, but they’d obviously failed. Angstrom confirmed it was the Stenza “cleansing” her planet now.

By this point, the Doctor knew about the flesh-eating microbes in the water, but she hadn’t used her sonic screwdriver to analyze any of the cloth-like material we’d seen lying around earlier above ground as they trekked across the terrain. Like Chekhov’s gun, it would, of course, come into play. Sleeping Epzo was nearly suffocated by a strand, but Angstrom’s knife freed his mouth. The Doctor knew they needed to get up out of the tunnels, if only because the sniper guards were on their tail now and had shut off the air supply (so convenient that those surveillance cameras still worked in the tunnels for Yaz and Ryan to spy them).

The group had to climb another ladder (after Ryan got a pep talk from the Doctor) and face an acetylene field above. Those cloth creatures were why you don’t travel at night — dormant during the day, they come alive in the dark, surround you like dementors, and wait to crush the fear and life out of you. The Doctor’s plan this time: Chekhov’s second gun aka Epzo’s self-lighting cigar could be used to spark the lighter-than-air gas, scorching the floating creatures and giving everyone a chance to army crawl away to safety. 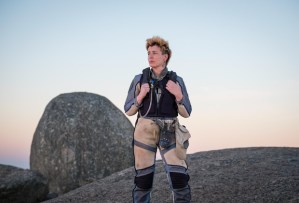 ‘MY BEAUTIFUL GHOST MONUMENT’ | In the end, Angstrom could have outrun injured Epzo to the winner’s tent, but the Doctor convinced them to walk in as co-champions. Although Angstrom asked for Team Doctor to be transported off Desolation as well, the four were left there. “I’m sorry, I failed you,” the Doctor said. It’s always touching when the companions have to be the one not to give up. They’d come this far together; they still had hope even if the Doctor didn’t. And then there was that familiar sound, and those chills, as the TARDIS arrived.

The Doctor wasn’t the only one who’d missed it. The audience got its first look at the redecorated, industrial-deco interior as we waited for the Doctor to make an “It’s bigger on the inside joke” that never came. “Start believin’,” the Doctor told the trio as she promised she could now get them home.

That still leaves us with the big question: Why will the three of them stick with the Doctor? Could it be that Ryan misses having a wise woman to encourage him, and loves to touch things he shouldn’t (which the TARDIS is full of; see that new biscuit dispenser)? Has Graham quickly learned to embrace Grace’s love of adventure (and grown attached to those sunglasses he borrowed from the Doctor, who’d gotten them from Audrey Hepburn or a hungover Pythagoras)? And was Yaz saying she’d always wait for Ryan a way for Chibnall to set up that she’d stay not only because she feels bored and undervalued as a probationary cop but also because she feels a loyalty to Ryan? Hit the comments, and we’ll do it again next week.