Law & Order: SVU‘s fall finale is little more than an excuse to put guest stars Judd Hirsch (Taxi) and Wallace Shawn (The Princess Bride) in scenes together and let them do their thing — and that’s totally fine by us.

The episode, “Alta Kockers” (also known as “alter kocker,” Yiddish for crotchety old person), starts out with a young author speaking at a book reading. The passage read is all about being used, sexually; the audience is rapt. Afterward, the author — Bobbi O’Rourke, a former child prostitute — sneaks outside to smoke… and before you know it, Bobbi is beaten and killed, the victim of what appears at first to be a hate crime.

Benson & Co. quickly establish that Bobbi wasn’t actually transgender, he just “discovered that he could make more money pretending to be a teenage girl,” Rollins notes. Still, the kid is dead, so they investigate until they find a guy who looked shifty the night of the reading. Their work is basically done for them when the guy easily admits to the murder. His motive? He’d paid for Bobbi’s services in the past — only then, the kid said his name was Tammy — and he was angry about not being told the truth (I think? Honestly, crazy guy just sounds crazy at this point).

Bobbi’s publisher eventually admits that he’s never actually met Bobbi; the manuscript showed up, unsolicited, and the kid at the reading was, indeed, a sex worker named Tammy whom the publisher paid a couple of hundred dollars to pretend to be the elusive author. But Bobbi’s payments have been direct-deposited to an account accessed from a computer; Fin gets the ISP address, and he and Carisi head out to the home. 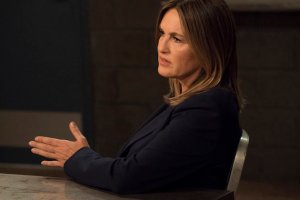 At Bobbi’s address stands a giant old house; neighbors say there’s someone living there, but they’re not sure exactly who. So the cops get a warrant and bust in; the place is full of junk. Eventually, Fin and Carisi stumble over the home’s two occupants: elderly brothers named Joe (Hirsh) and Ben (Shawn), who have lived there their entire lives and haven’t left the building in decades. Oh, and they can’t stand each other.

At first, the two men claim to have no knowledge of Bobbi or his book, Blue Barracuda. But while they’re being questioned at the station, dropping Yiddish slurs all over the place, Carisi investigates more and finds a hidden room with a laptop containing a work-in-progress titled Blue Barracuda 2. Eventually, Ben confesses that he wrote the book as a means of supporting them, because their dead mother’s money was about to run out.

About that dead mother? Carisi finds her body in a locked freezer in the home’s basement.

But the whole thing isn’t as SVU as you might expect, at least not at first. Ben and Joe’s mom had lung cancer and was dying an incredibly painful death when they apparently suffocated her to put her out of her misery. Still, Stone argues, euthanasia is not OK in the eyes of the law, so both men are charged with murder.

Meanwhile, Benson realizes that the writing in Blue Barracuda echoes what she’s heard from a ton of abuse victims over the years. With a little pushing, she gets Ben to admit that he’d been abused by a counselor at the community center when he was a child. He was too ashamed to tell his brother or his folks. What he doesn’t know: In another room, Joe confesses to Rollins that he, too, was one of the counselor’s victims, but his shame over the incident stopped him from confiding in his sibling. 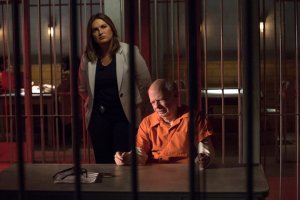 Though Stone offers the men a deal, they reject it. And in court, before Stone can call his first witness, Joe stands up and loudly confesses to offing his mom. Then, he collapses.

At the hospital, Joe eventually dies from the massive coronary he suffered. Stone drops the charges against Ben. And while Benson watches, Joe sits by his dead brother’s body and finally tells him about the abuse. The words he uses are the passage “Bobbi” read at the opening of the episode, verbatim.

What did you think of the episode? Grade the fall finale via our poll below, then hit the comments with your thoughts!